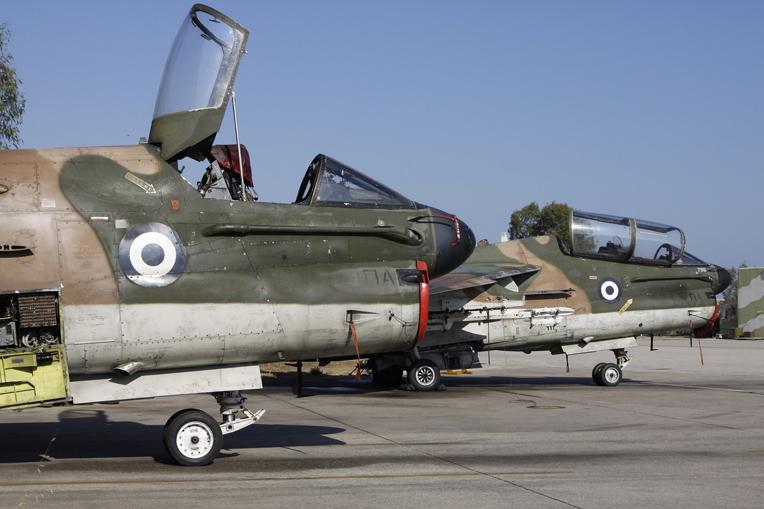 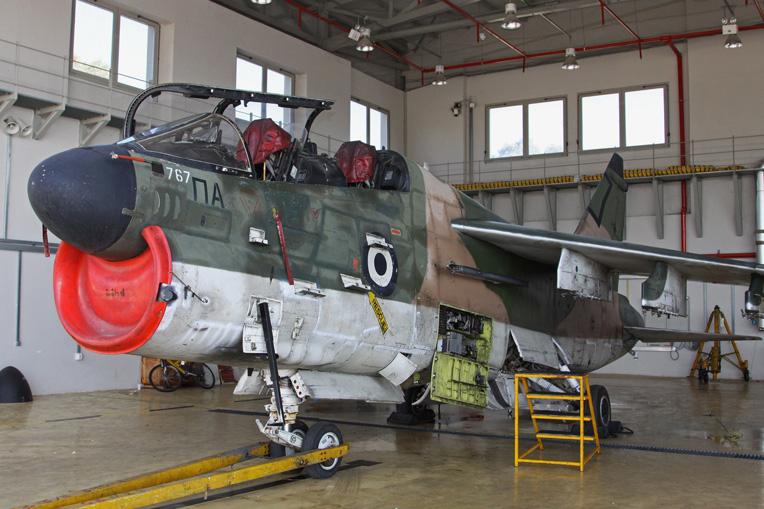 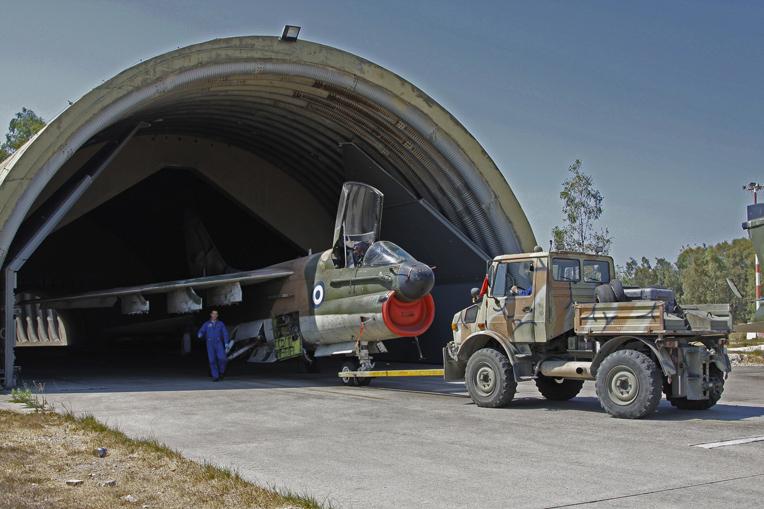 Another mission ends as this Corsair II hits the Araxos runway 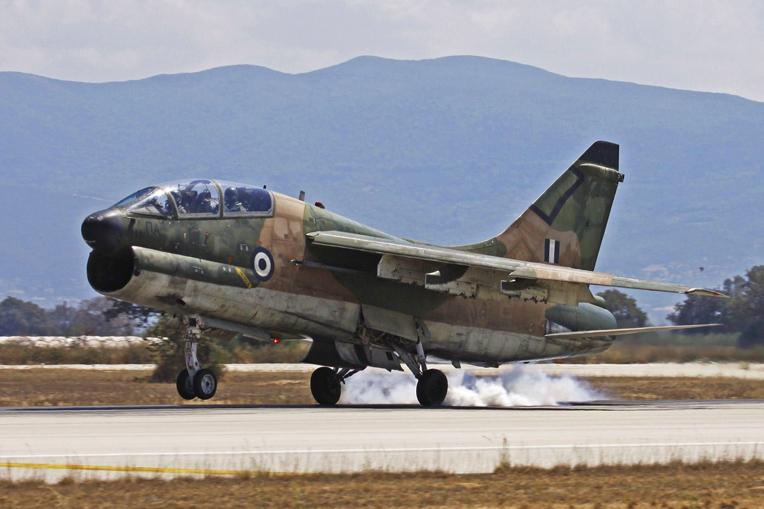 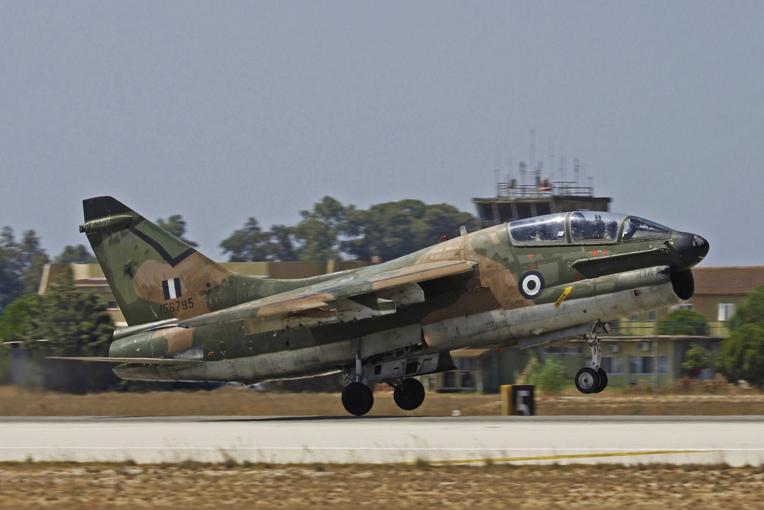 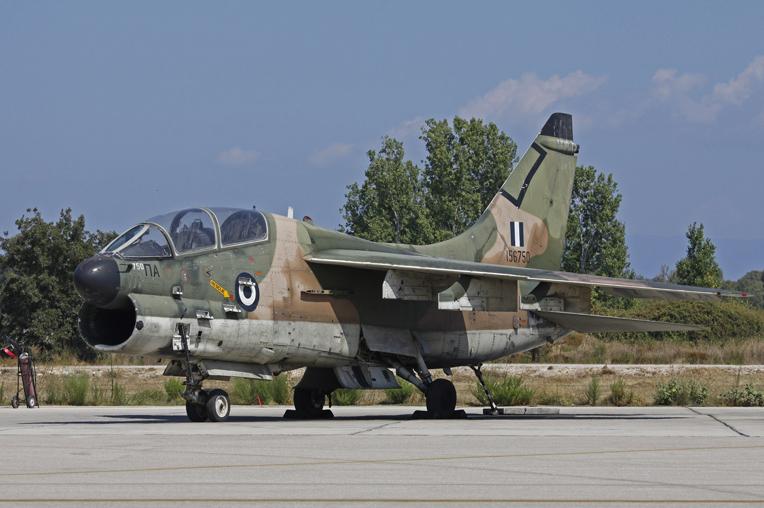 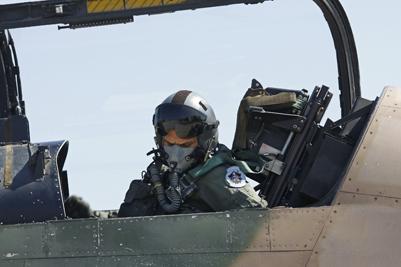 #156795 taxi's to the 36L Runway threshold, passing the base UH-1 SAR flight in the background 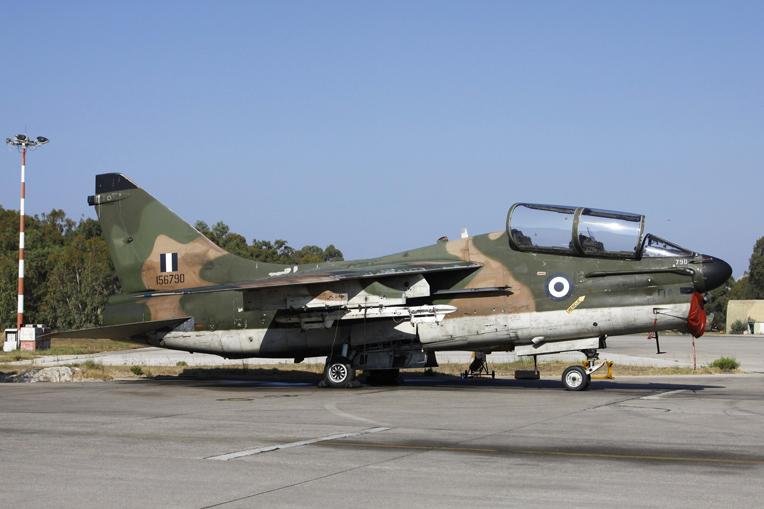 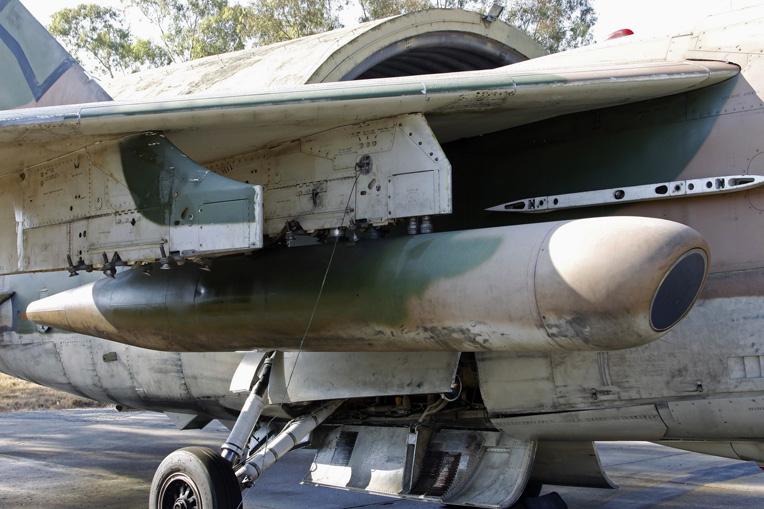 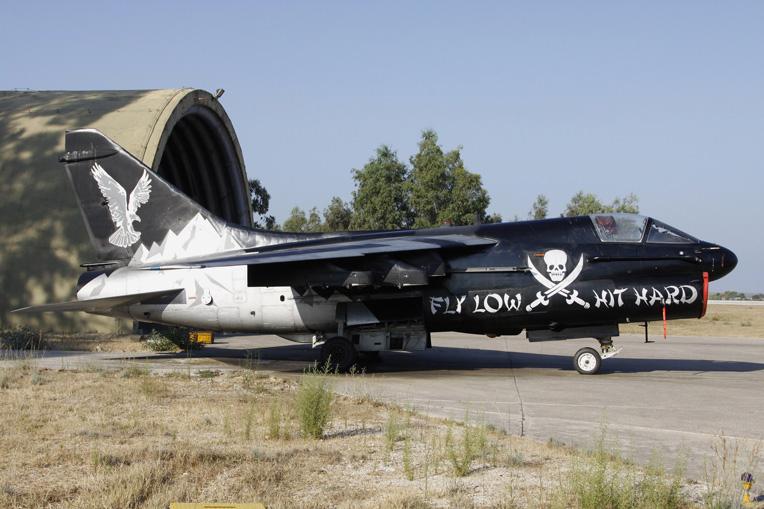 Although designated as a light-attack aircraft, the A-7 Corsair can carry in excess of 15,000lbs of ordnance 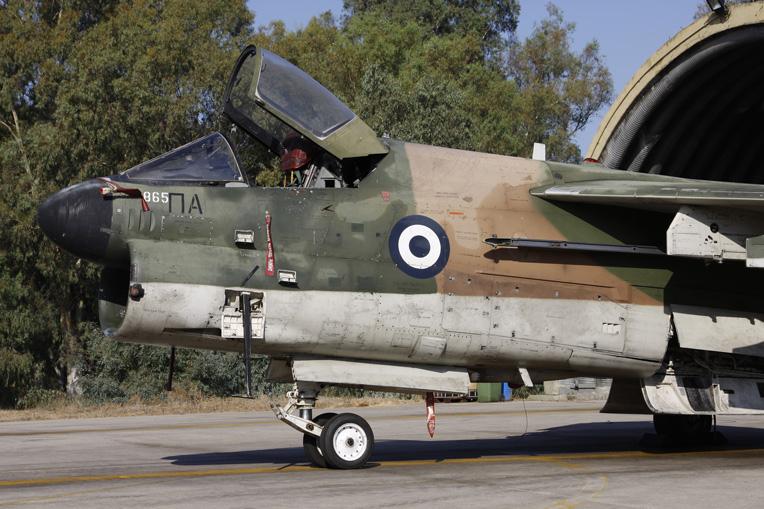 'Once a Corsair, always a Corsair'

The 'SLUF' (short, little, ugly fella) as the A-7 is colloquially known, is slated for withdrawal by 2015, and so Jetwash Aviation Photos was provided with exclusive access at Araxos to reort on the aircraft's long and illustrious career, before yet another legendary aircraft fades into the history books.

The back-seater straps himself into his Stencil SJU-8/A 'zero-zero' ejector seat, 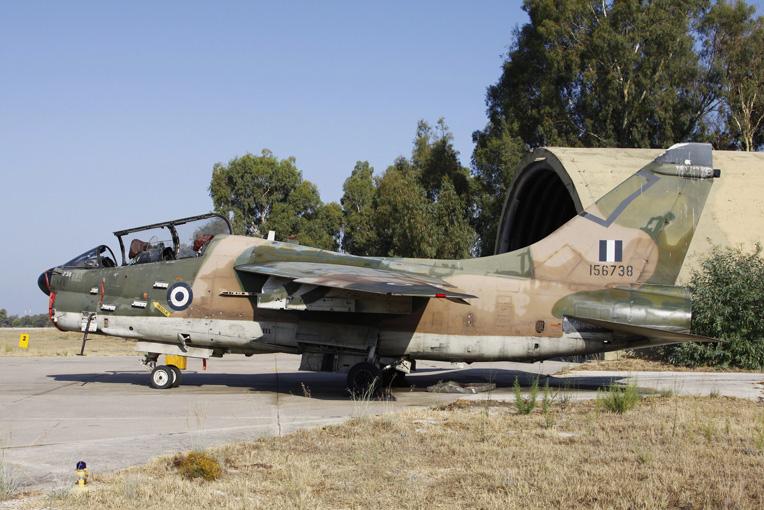 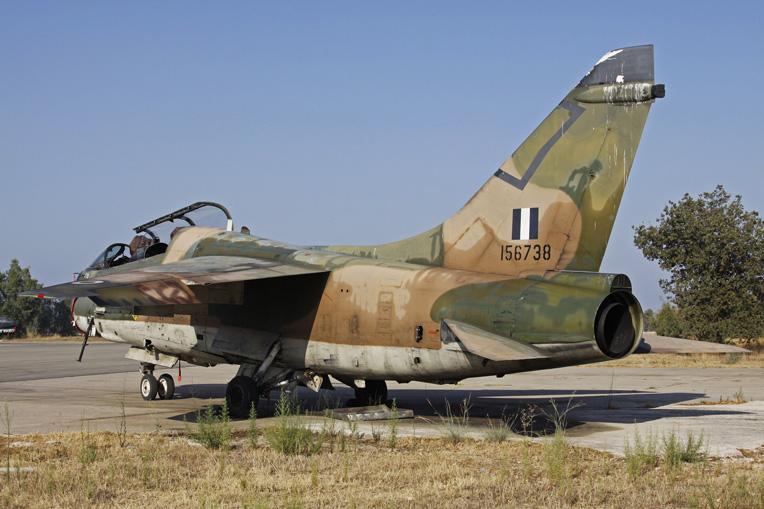 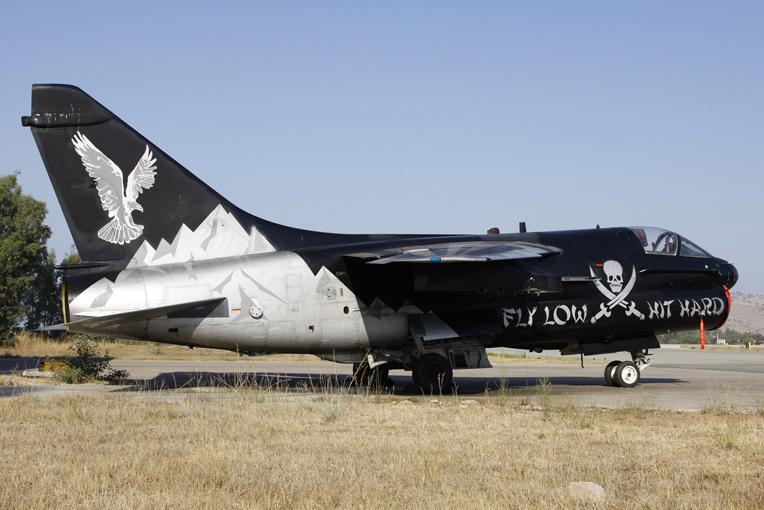 Major Apostolos Papadopoulos,Commander 336 MV, (above, left) proudly sits behind his desk at the squadron's HQ. Having only been in charge of the squadron for a couple of months, he told me hoped to be the last Squadron Commander of 336 Mira whilst it operated the A-7. 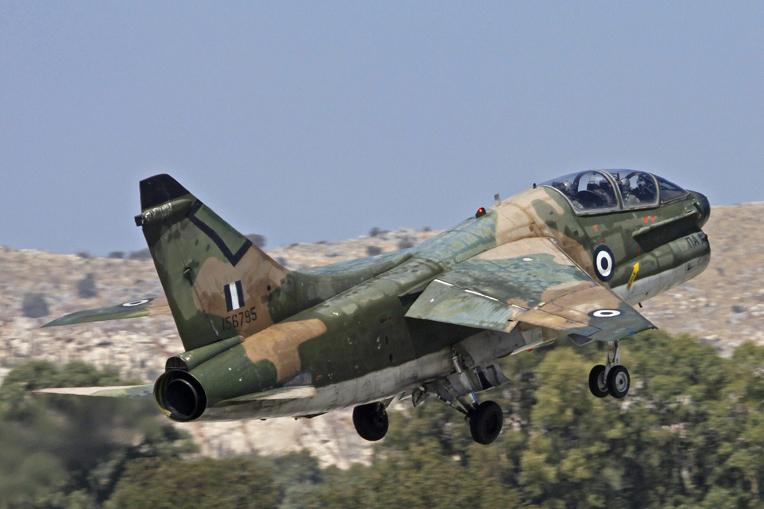 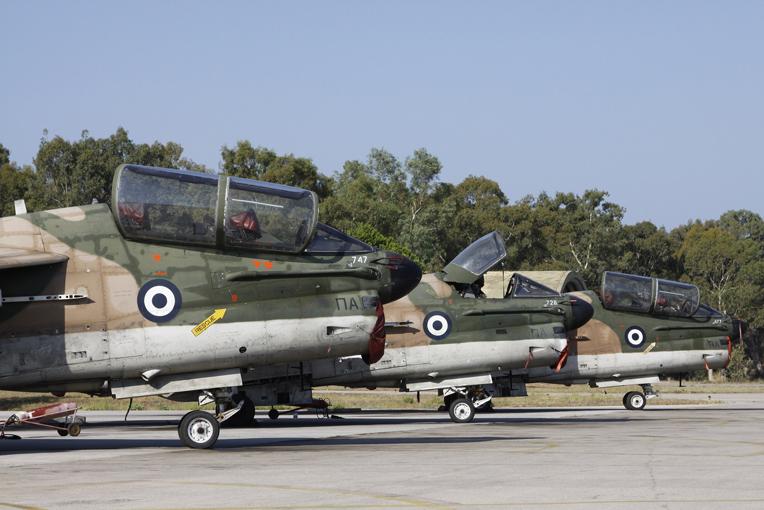 The wing pylons can carry four wing-mounted 300 gallon fuel tanks and a combination of general-purpose bombs totaling 15,000lb (6,800kg), including up to 30×500lb (230kg) Mk.82 bombs, Paveway Laser-Guided Bombs (LGB), AGM-45 Shrike, AGM-62 Walleye, AGM-65 Maverick, AGM-88 HARM, and GBU-15 electro-optical glide-bombs. The Autonomous Free-flight Dispenser System (AFDS), containing 16 BLU-108B bomblets is also certified for the A-7. The Hellenic Air Force had previously participated in NATO's nuclear weapons sharing using the A-7, whereupon they deployed the B61 unguided tactical nuclear bomb, but in 2001 the B.61s were put into storage. The HAF A-7s are also optimized to carry the AIM-9L Sidewinder for self-defence, utilising the two fuselage launch stations just below the cockpit, although these are rarely, if ever used now.

February 27th, 2008 saw 335 Mira withdraw its A-7s in favour of the F-16, with many of their aircraft bolstering those of 336 Mira, which continues to fly the A-7E and TA-7C to this day and has the distinction of being the last unit in the world to fly the SLUF. Currently having approximately 30 aircraft on strength, 336 Mira has more than enough to maintain sufficient flight hours for the unit's pilots, whilst also providing enough airframes to cope with any on-going maintenance. This aside, Araxos also has a vast storage area containing large numbers of withdrawn A-7s, providing an almost never ending supply of cannibalised spare parts when required.

Eighteen TA-7Cs were purchased from the United States, with around ten still being on strength

We would like to thank the following for arranging and assisting us during our visits with the Hellenic Air Force:-
Caroline Makropoulos (Defence Attaché, British Embassy, Athens) 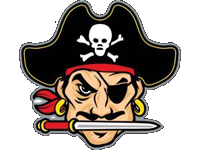 LTV later christened the A-7, the Corsair II. As the Corsair II did not need to fly at supersonic speeds, the A-7 was powered by a non-afterburning Pratt & Whitney TF30-P-6 turbofan delivering 5,148 kg (11,350lb) of thrust. There were eight external stores stations on the A-7, capable of carrying more than 6,805 kg (15,000lb) of weapons, which included both air-to-air and air-to-ground missiles. It was also equipped with a pair of internal 20mm Colt Mk.12 cannons.

Araxos Air Base in the Peloponnese region of Greece, is home to 116 Pteriga Makhis (Combat Wing) of the Elliniki Polemiki Aeroporia (Hellenic Air Force) and is quite unique in that it operates the most modern fighter aircraft in the Hellenic Air Force (HAF), as well as the oldest. The state of the art Lockheed Martin F-16 'Block 52' Fighting Falcon is operated by 335 Mira, whilst the ageing but venerable Ling-Temco-Vought A-7 Corsair II is flown by 336 Mira. The chance to spend some time with the LTV A-7 Corsair IIs of 336 Mira Vomvardamou (Fighter-Bomber Squadron) was our reason for visiting Araxos, and an opportunity to photograph the last active Corsair IIs anywhere in the world. 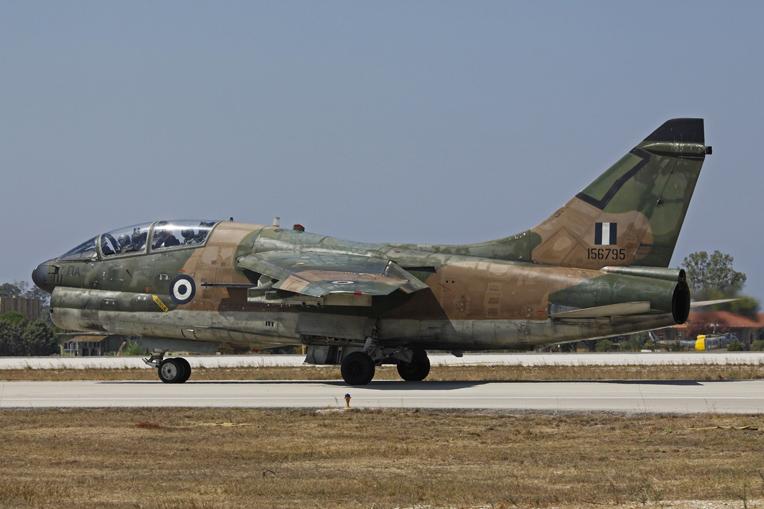 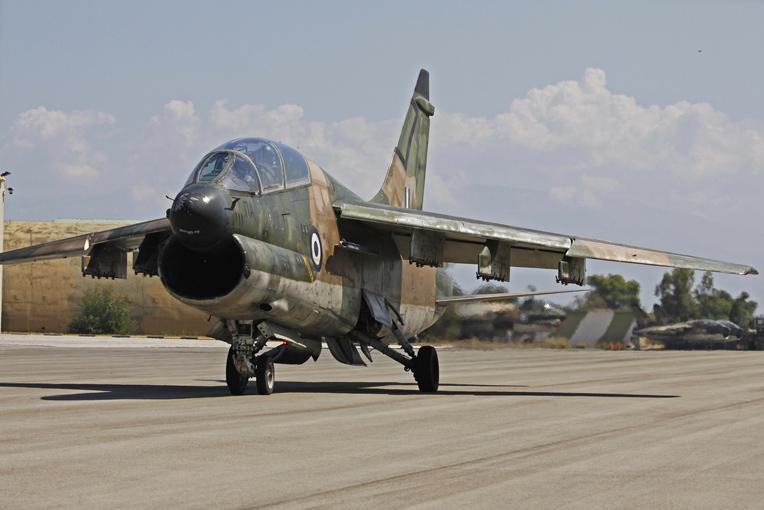 #160865 sits alongside one of the Hardened Aircraft Shelters (HAS) at Araxos
As there are not enough shelters to accommodate all of the A-7s, some are parked on the adjacent ramp next to each HAS 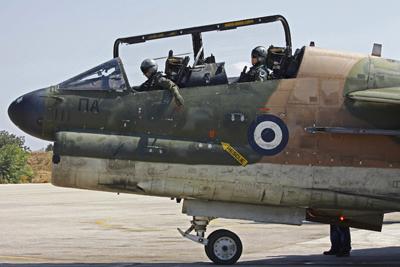 The Hellenic Air Force (HAF) became the first foreign customer for the A-7 Corsair II in 1975, taking delivery of 60 new A-7Hs (the H standing for Hellenic) to replace the Republic F-84F Thunderstreak in Greek service. An order was later placed for five, two-seat trainer aircraft designated the TA-7H. Deliveries of these took place between July and December 1980. The first Hellenic Air Force Corsair IIs went to 115 Wing at Souda Bay, Crete, with 340 Mira and 345 Mira; and also to 347 Mira at Larissa. All the A-7s were later moved to Souda Bay in July 1993 and then finally onto Araxos in 2002. The original A-7H and TA-7H aircraft remained in service until March 2007, when all the survivors were then put into storage.

Having proved extremely reliable and popular with pilots and ground crew alike, the HAF had decided to buy more A-7s in the early 1990s. This resulted in some surplus US Navy A-7Es and TA-7Cs being purchased, delivery taking place in 1992, with the airframes issued to 116 PM at Araxos, where they equipped 335 (Tiger) Mira and 336 (Olympos) Mira.

Pilots joining the Hellenic Air Force commence their basic flight training at the Hellenic Air Force's Flight Academy at Tatoi/Dekelia Air Base with approximately 35 hours on the Cessna T-41D Mescalero. Upon completion of this, it is followed up with a further 110 hours on the Beechcraft T-6A Texan II at Kalamata with 361/364 Miras, whereupon they then transition to 362 or 363 Mira (also at Kalamata) with the Rockwell T-2E  Buckeye for a further 130 hours or so of advanced flying/weapons training. After graduation, the pilots are then assigned to their appointed front-line wings to continue training on the aircraft operated by the individual unit. At this point in time they normally have around 200-250 hours in their flight logs and have achieved the rank of 2nd Lieutenant.

Hellenic Air Force A-7s are equipped to carry the Texas Instruments AN/AAR-45 LANA (Low-Altitude Night Attack) Forward Looking Infra-Red (FLIR) pod
Projecting an amplified image onto the Heads Up Display (HUD) and in conjunction with the radar, it enables terrain following down to 200 feet
Compared to today's state of the art FLIRs such as Sniper, it is somewhat on the large side

A twin-seat 'SLUF' follows us along the taxiway towards the 11,000ft Runway 36L at Araxos 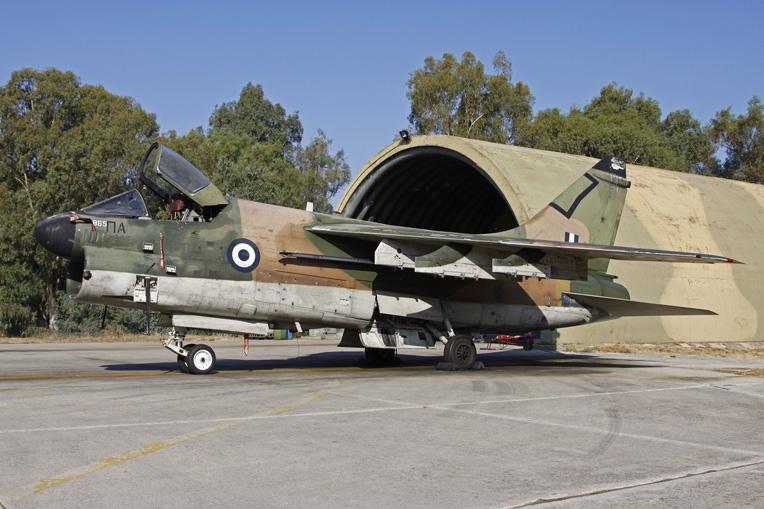 The World's Last Corsairs
'Pirates of the Aegean'

Development of the A-7 began in 1962, when the United States Navy began looking for a new single-seat, subsonic light-attack aircraft that could carry a heavy weapons load over a long range. On 17th May 1963, the US Navy announced the competition for an aircraft to replace the Douglas A-4 Skyhawk. LTV was contracted to develop and build one prototype, six flight test machines and 35 production aircraft, under the designation A-7A. The prototype rolled out of the factory on 13th August 1965 and made its maiden flight on 27th September 1965. 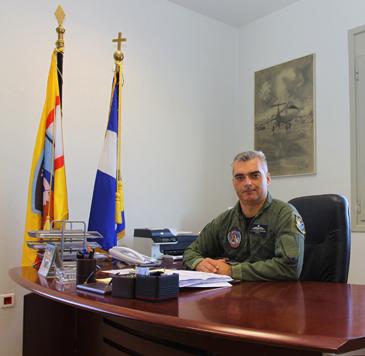