get to understand how they see the world. Working alongside international fifth generation aircraft provides unique training opportunities for us, bolsters our integration capabilities, and showcases the commitment we have to the NATO alliance.” 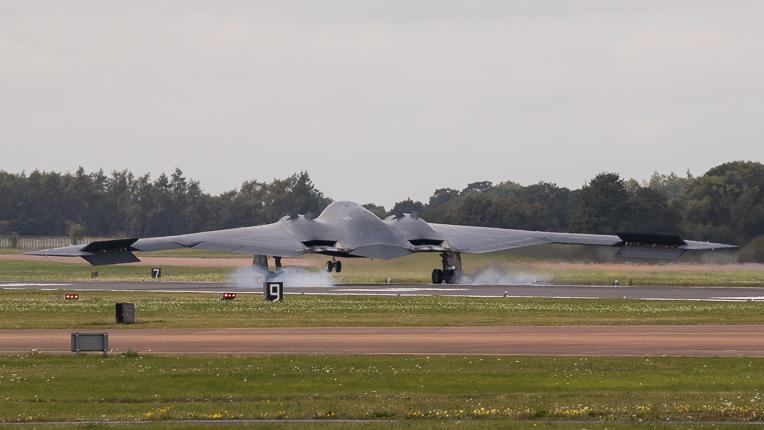 The aircraft had departed at 07.54am using the call-sign Mytee 22, in tandem with Mytee 21

The U.S. Air Force regularly deploys bomber aircraft to the European theater of operations (USEUCOM). Training with joint partners, allied nations and other U.S. Air Force units contributes to its readiness, enabling the United States to build the enduring and strategic relationships necessary to confront a broad range of global challenges. Late August 2019 saw a Bomber Task Force (BTF) deployment of three Northrop Grumman B-2A Spirit aircraft from the 509th Bomb Wing arrive at RAF Fairford for a deployment to conduct theatre integration and flying training from Europe’s Forward Operating Location (FOL) for the USAF B-2 strategic bombers - the deployment also providing the opportunity to conduct joint and allied training in Europe to improve the bombers interoperability. 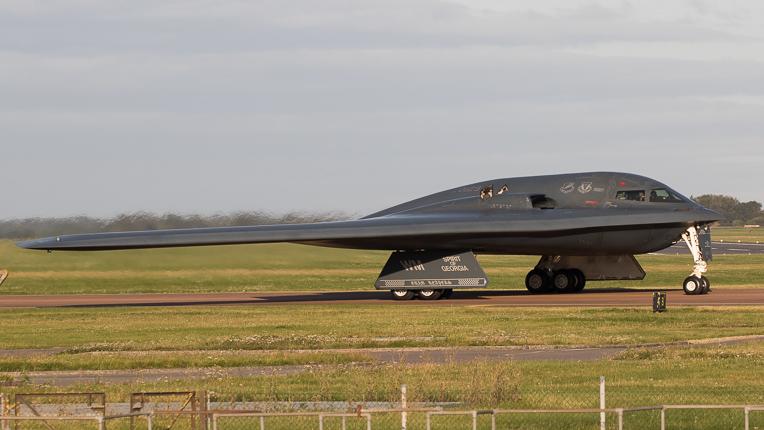 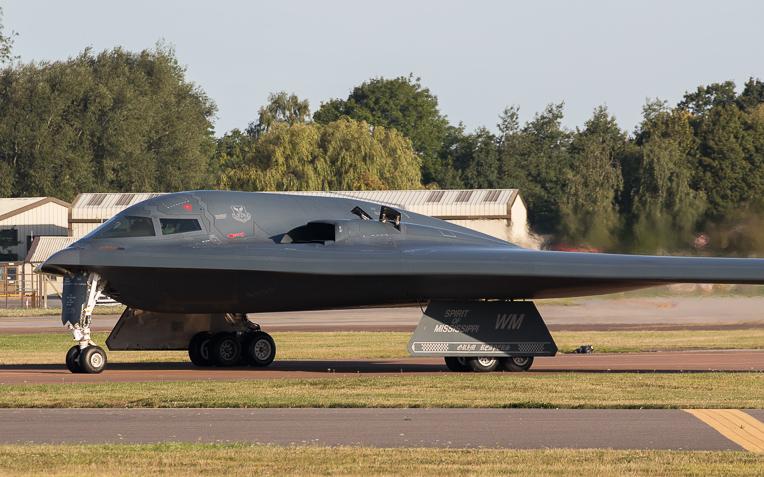 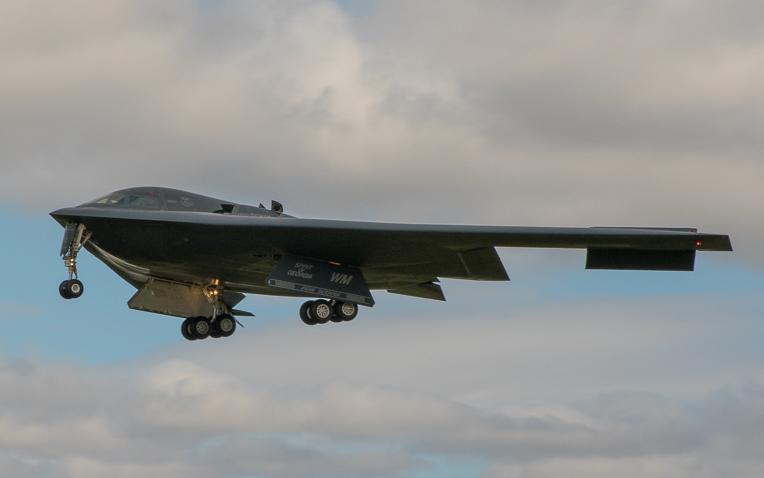 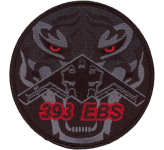 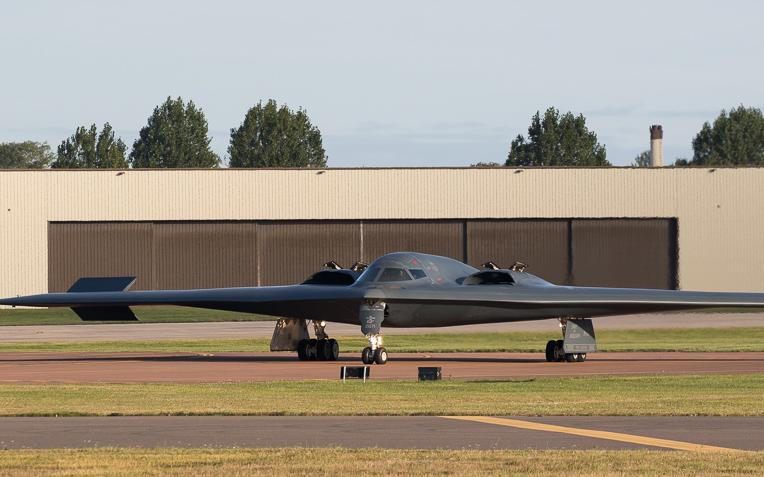 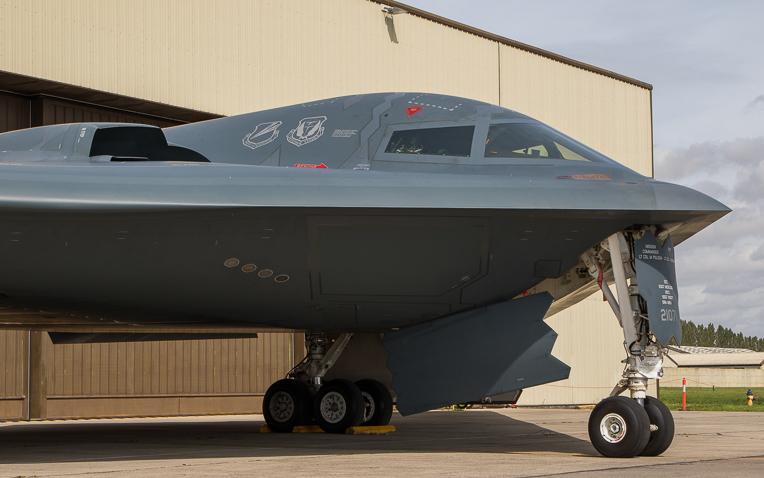 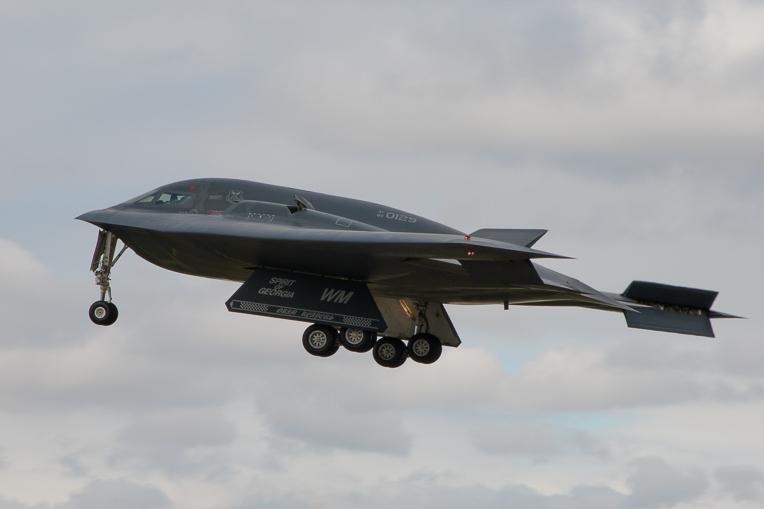 We'd like to thank the following for their assistance with this article:- 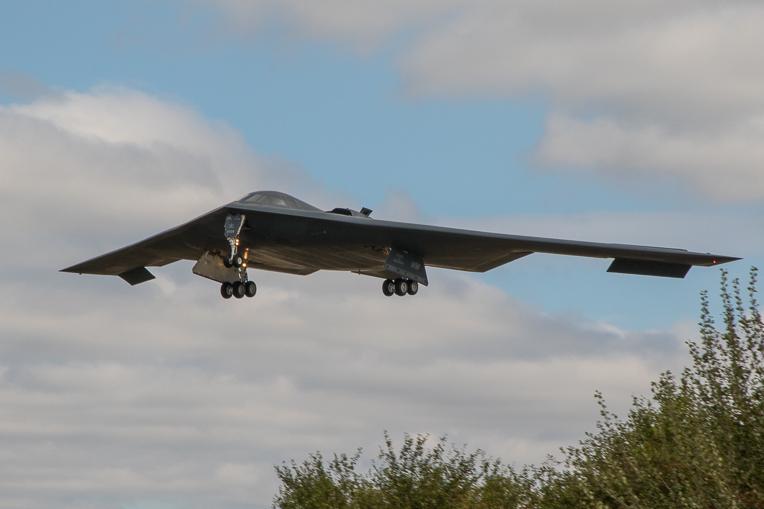 Monday 2nd September saw four missions flown. Part of the training that day saw the two B-2s involved each fly a morning mission, followed by an afternoon one. Between the two missions the B-2s practiced 'hot-pitting' - a refuelling technique used to eliminate extra maintenance and to extend pilot training time for each flight. The hot-pitting technique allows aircraft to land and refuel without stopping their engines, increasing the ability to generate sorties and minimise the time required to get aircraft airborne again. 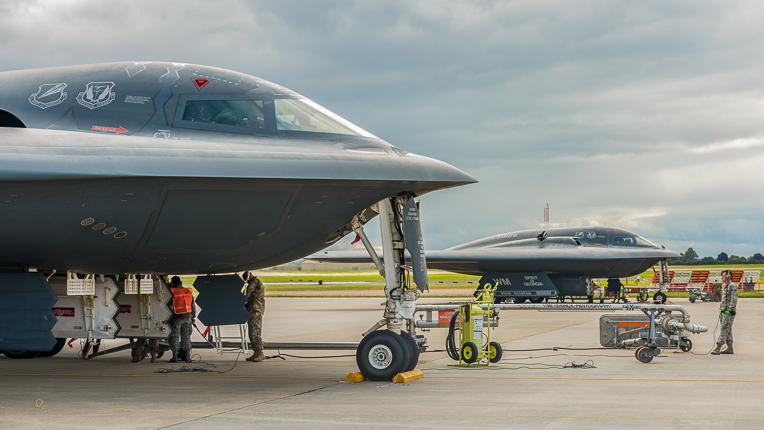 With the fleet nearing 30 years of service, the B-2 is undergoing a number of ongoing upgrades including – Defence Management Systems Modernisation; a new beyond line of sight Adaptable Communications Suite; Low-Observable Signature and Supportability Modifications to improve the aircraft’s stealth signature; Radar-Aided Targeting System to provide precision weapons targeting in GPS-denied environments; and JASSM-ER integration to enable B-2s to carry 16 extended-range AGM-158 JASSM. Future planned upgrades will incorporate the ability to carry both  a smart bomb rack and rotary-launcher to maximize the aircraft’s load-out flexibility; airspeed and altitude hold auto-pilot functionality to reduce crew fatigue; integration of hypersonic weapons and the integration of anti-ship weapons such as the Long-Range Anti-Ship Missile.

Less than 700 people have flown the B-2 since its introduction to service almost 30 years ago. The majority of those have of course been U.S service personnel, but a small number have also been Royal Air Force exchange pilots; two of which I have met and personally interviewed about their time with the 509th. The B-2 pilot community comes from a wide-ranging background - former fast-jet pilots, aerial refuelling and transport aircraft being examples; whilst some of the lucky ones have even been assigned straight from pilot school. Each B-2 pilot is assigned a unique 'Spirit Number' which is proudly worn on their name badge alongside their call-sign. 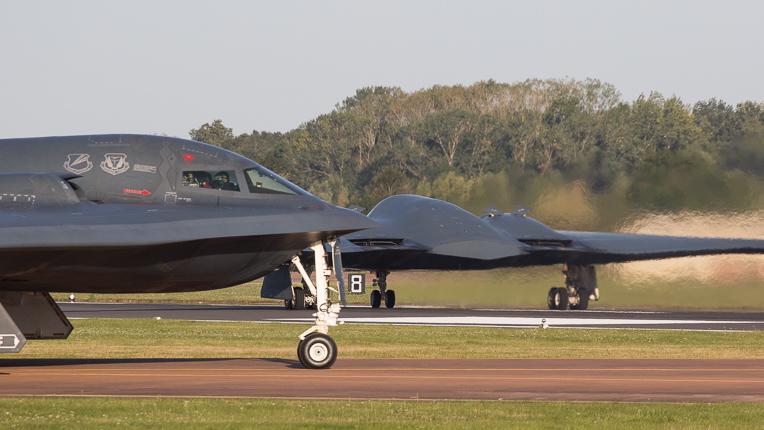 Aircraft involved in the deployment were:-

The short-term deployment by the 393rd Expeditionary Bomb Squadron (393 EBS) demonstrated the global strike capabilities of the U.S. bomber force, whilst also ensuring U.S bomber crews maintain a high state of readiness. The training provides opportunities to integrate capabilities with regional partners and is part of the United States’ commitment to supporting global security. A number of the personnel from Whiteman AFB were members of the Missouri Air National Guard’s (ANG) 131st Bomb Wing, working alongside the active-duty 509th BW – however it is noteworthy that no ANG aircrew were involved in the deployment.

'Bang' (name withheld at his request) is the current Royal Air Force exchange officer with the 393rd BS. He is the 649th pilot to fly the B-2 and joined the Squadron in January 2017, making his last flight on 29th August and handing over the reins to another RAF exchange officer who will take over this coveted position for the next three years. As for 'Bang', he's about to take over a Staff job at RAF High Wycombe. We asked him about his career to date; "After I completed fast-jet training at RAF Valley, I went to Lossiemouth on the Tornado GR.4, spending four years with 12 Sqn. In 2012 I went to RAF valley as a Qualified Flight Instructor (QFI) on the Hawk T.2 with 4 Sqn, leaving in 2017 to fly the B-2.

Asked about how the B-2 compares to fast-jets he told us; “It’s pretty stark really. From my last assignment on the Hawk - it's very different. This aircraft flies like nothing else; you can tell that just by looking at it. It's going to be,

Northrop Grumman built 21 B-2As, with 20 currently in the USAF inventory (#89-0127 ‘Spirit of Kansas was destroyed in an accident at Andersen AFB, Guam on 23rd February 2008). Achieving Initial Operational Capability (IOC) in April 1997, it is powered by four General Electric F118-GE-100 turbofan engines the, the B-2 has arrange of 6,000 (which can be extended with air-to-air refueling), a surface ceiling of 50,000ft and cruising speed of Mach 0.77. The two-man crew sit on ACES II zero-zero ejection seats, with an on board ‘cot’ for resting during long flights. The B-2 is capable of carrying more guided weapons than any other platform (up to 80 x GBU-38 JDAMS). Its vast conventional weapons array includes – GBU-57 Massive Ordnance Penetrator, GBU-28 LGB, AGM-158 JASSM, AGM-154 JSOW, GBU-31 JDAM, GBU-38 JDAM, Mk.82 bombs, Mk.62 sea mines; with its nuclear inventory including B63 and a variety of B61 variants. The existing fleet has all been upgraded to Block 30 standard, featuring an Active Electronically Scanned Array (AESA) radar and Link-16 (a military tactical data-link network used by NATO). 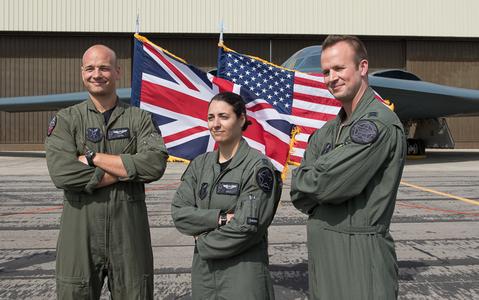 U.S. Air Force B-2s conducted interoperability training with Royal Air Force F-35B Lightning’s on 29th August, in the first-ever non-U.S. F-35 integration with the B-2, enhancing the U.S’s ability to integrate bombers with fifth-generation fighter aircraft like the F-35 and sharpening the Wing’s readiness and ability to respond to any potential crisis or challenge across the globe.

Two of the stealth bombers conducted a training mission from RAF Fairford to Keflavik Air Base, Iceland, on 28th August

The mission also involved hot-pitting at Keflavik, carried out by the 509th Logistics Readiness Squadron 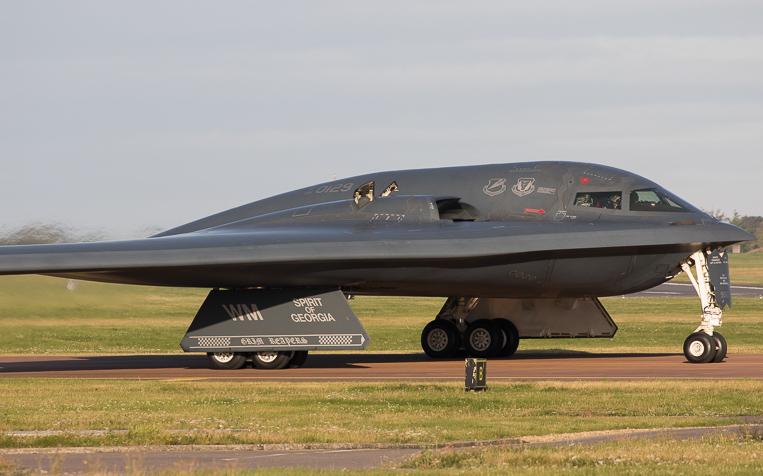 In the background are the purpose-built hangars for the B-2 Spirit, which are capable of housing two B-2 aircraft 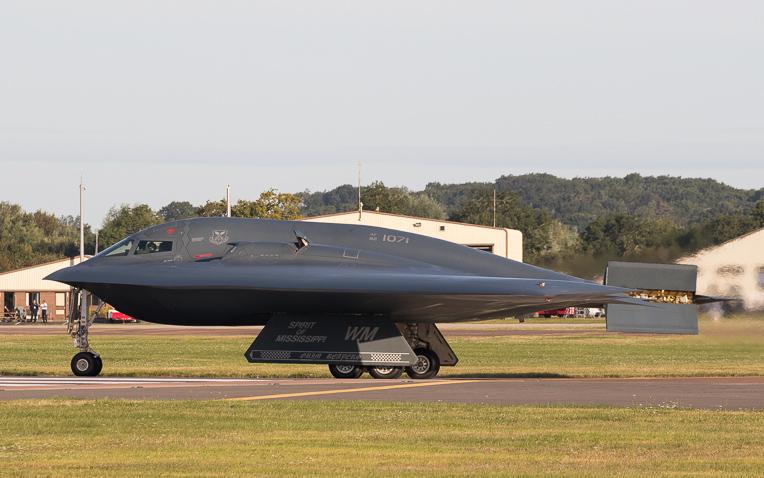 The 509th Bomb Wing is part of Air Force Global Strike Command (AFGSC), based at Whiteman Air Force Base, Missouri. As part of the USAF strategic and conventional bomber force, the unit’s Northrop Grumman B-2A Spirits can project air power anywhere around the world, employing an array of precision-guided ordnance. Having moved from Pease, New Hampshire, to Whiteman in September 1990 – it was more than three years before the Wing’s first B-2 arrived on 17th December 1993. The Wing has two active flying squadrons – 13th Bomb Squadron, which conducts all training and education requirements, whilst the 393rd BS is the operational squadron. 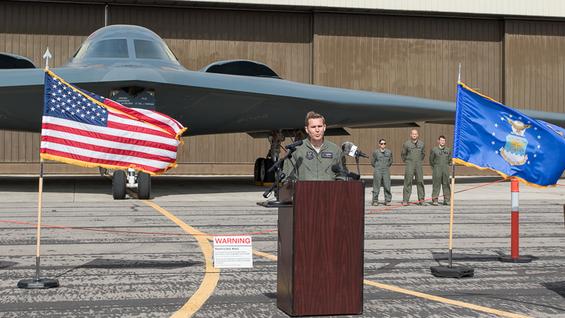 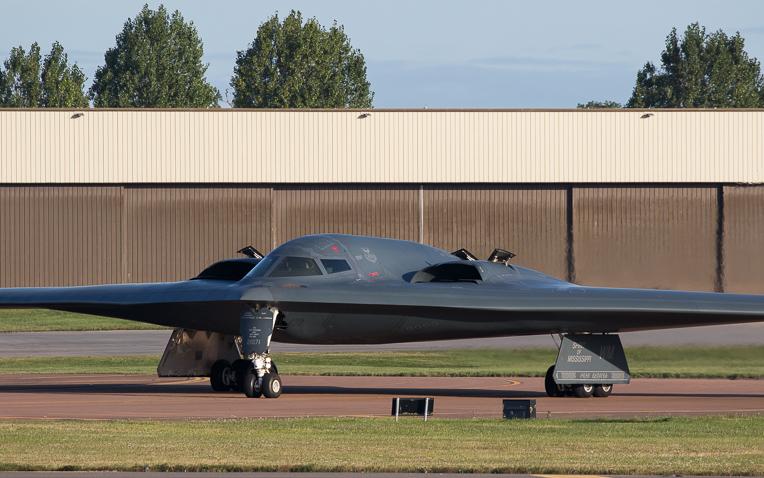 Despite being stealthy, the B-2s didn't avoid everyone's radar, especially those within the aviation community

A number of die hard enthusiasts were there to watch the three aircraft deployment arrive early on morning of the 27th August; the first aircraft landing at 00.38am! 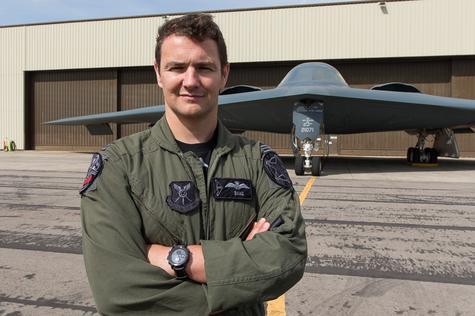 different, but you don’t’ really get a feel for it until you start flying it”. Asked about other overseas deployments he’s been involved in during his three years with the squadron he told us; “Yes, I’ve been fortunate. I’ve been to Guam on a BTF (Bomber Task Force), I’ve been to Hawaii on a BTF and here back in the UK; it's a real privilege to bring the aircraft back here and fly it for the last time in my own country from RAF Fairford is quite special. So I’ll work here for the next week or so as a liaison to smooth things over, operating in different airspace, a different structure, integrating with the RAF and then I’m off to the next job”. Asked about his time at Whiteman he said; “Whiteman is a great place – everyone who’s been there before me and the guy taking over has been welcomed with open arms. It’s a friendly place to be, small community, very like an RAF station really. The aircrew all know each other and so there’s a sense of belonging when you’re in the B-2 community; and as the RAF exchange officer you’re welcomed into that, making the transition all that easier- professionally, but also personally for me and my family”.