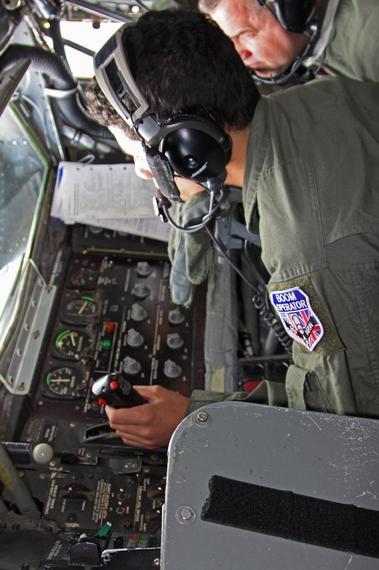 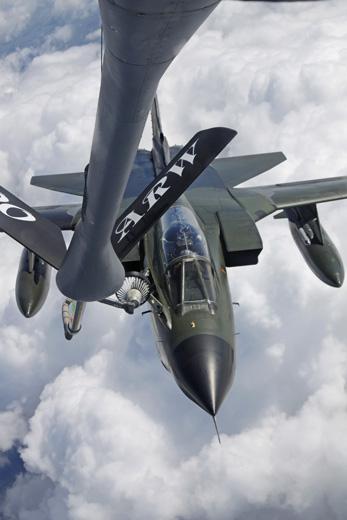 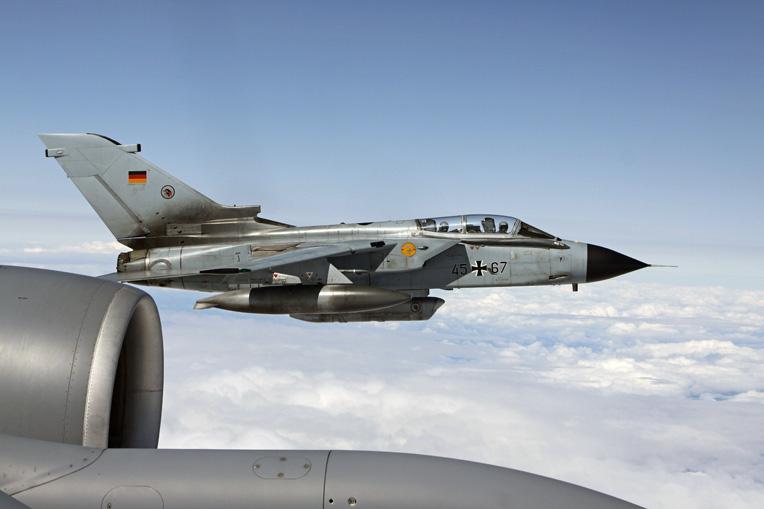 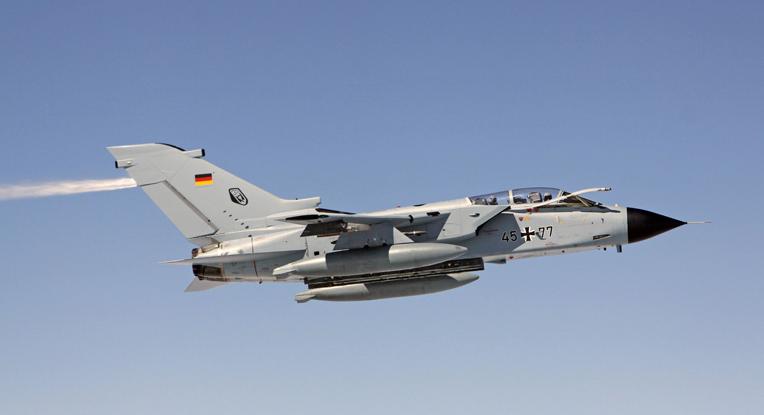 July 17th 2012, it's 04.45 local time when we arrive at the main gate to RAF Mildenhall, Suffolk. Having completed our medical requirements and obtained our base passes the previous day, getting on base is a relative formality. Through the vehicle search area and we head towards the 100th Air Refueling Wing operations building with our escort from Public Affairs and hope that we have another good day with our friends at the 'Bloody Hundredth'. We had arrived at Mildenhall the previous day expecting to get some Royal Norwegian Air Force F-16s in front of our lenses, but having been told their mission had been scrubbed we looked forward to some Luftwaffe Tornados to shoot instead. This gave us a great opportunity to obtain some images of the KC-135 utilising the USAF's Multi-Point Refueling System (MPRS), colloquially known as 'Mippers' by the mission crews. 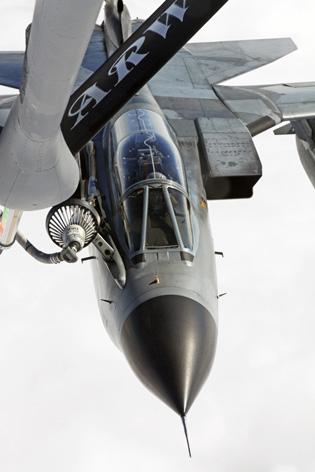 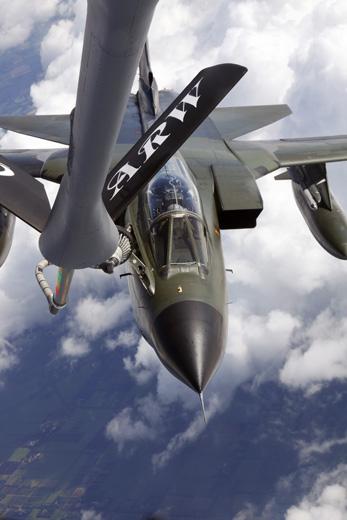 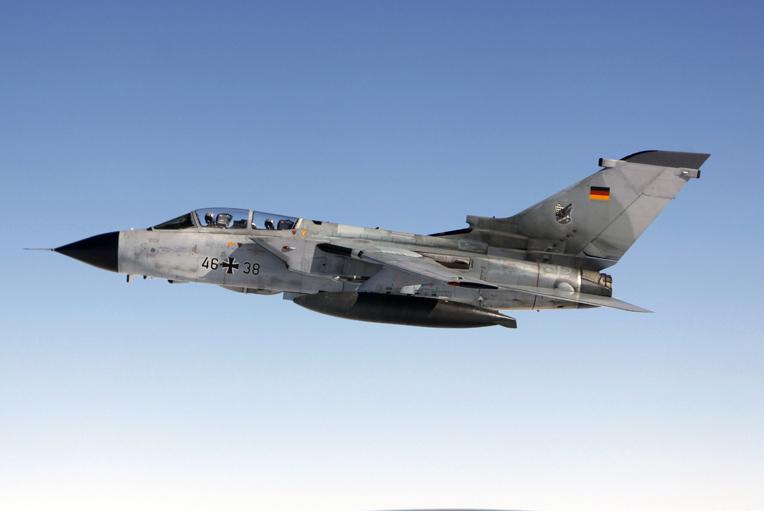 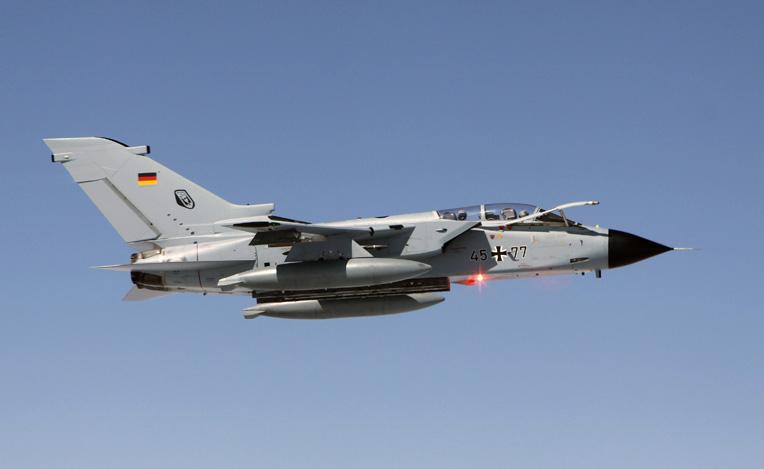 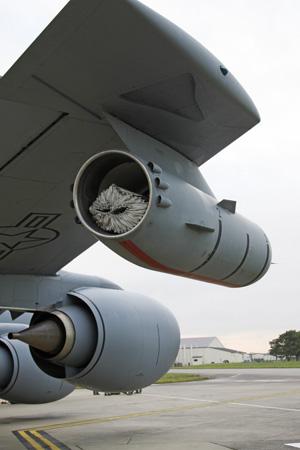 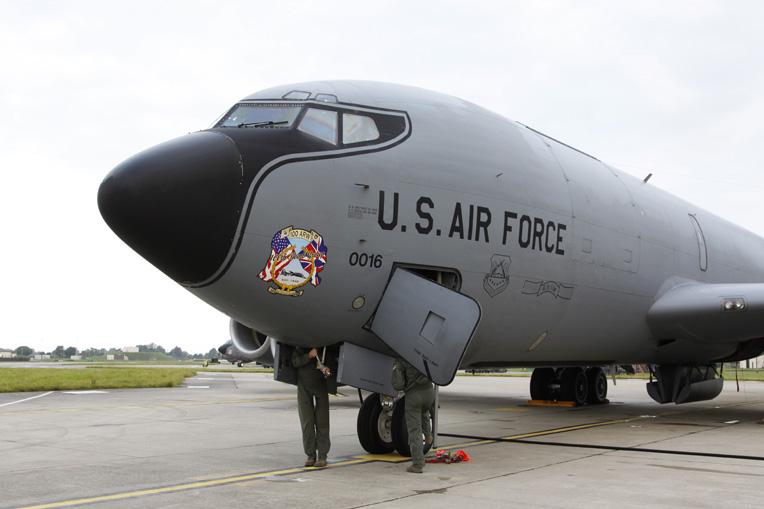 Our first traffic over 'Rosy' was a pair of Tornado IDS' from Jbg.33 based at Buchel
The second aircraft, 'Bomber 02' was in pristine condition and had none of the customary black scorch marks around the tail area
Seen above as it vents fuel from the top of the vertical fin it provides a classic shot of the Tornado in all its glory 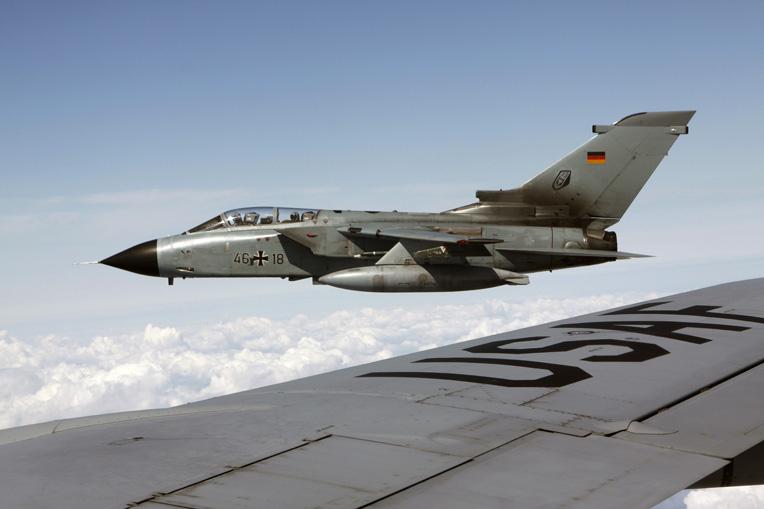 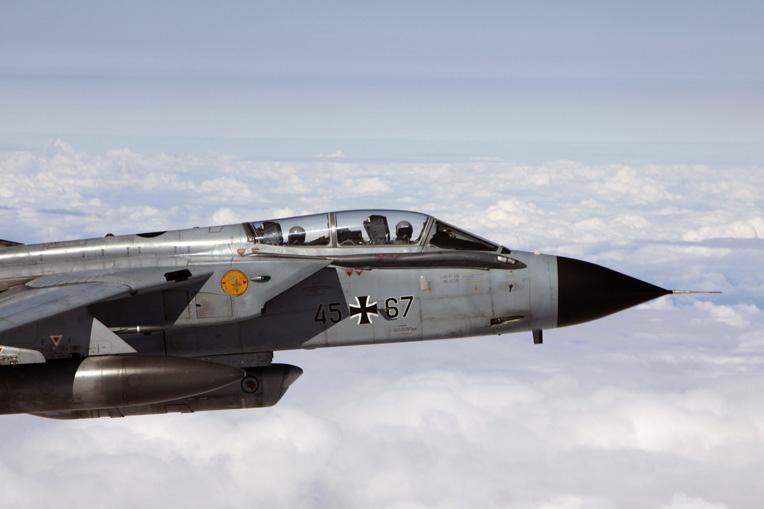 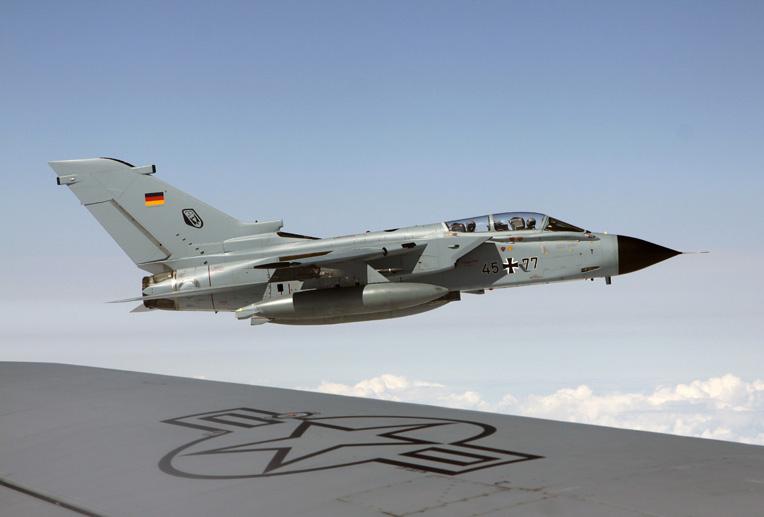 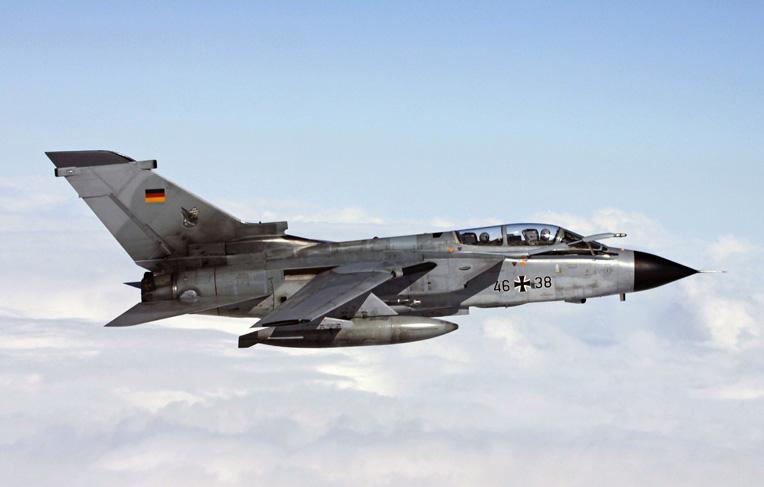 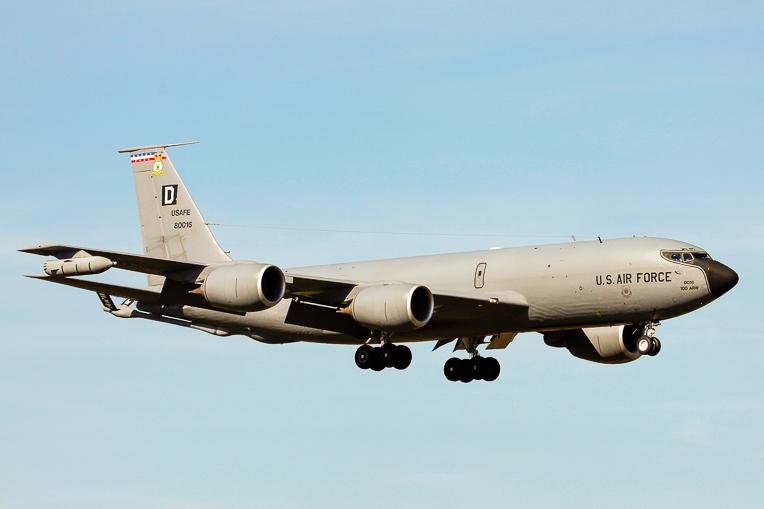 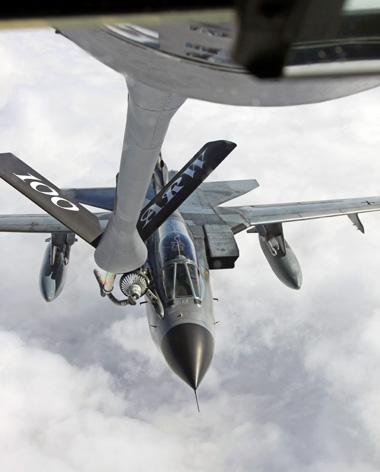 First onto the BDA, or 'Iron Maiden' as it is known as by the aircrews, is another JBG.32 Tornado ECR from Lechfeld

Showtime is scheduled for 06.15Z (Zulu) or 07.15 local time. Zulu time is used by air forces to eliminate any confusion relating to different time zones encountered within a mission and is based on Greenwich Mean Time (GMT). Ironically our routing today is one that would have been familiar to 100th Bomb Group B-17 Flying Fortress air crews carrying out bombing missions over Germany in WWII, but thankfully that is history and the USAF is now supporting the German Luftwaffe in it's peace-keeping missions under their NATO remit. With all four engines started and our safety briefing complete, we taxi to the end of Mildenhall's Runway 29 for our departure. With 118,000lbs of fuel on board (37,500 of which will be off-loaded during refuelling) and pretty much bang on schedule we have no problem making a rapid climb out and a right turn to head out towards the North Sea. The next hour or so is spent making sure our equipment is ready for when the action commences, although we had already checked our settings the previous evening, better to be safe than sorry. There's no second chances here and once the action starts there is little or no time to be playing around with camera settings or changing flat batteries. All that means is missed opportunities and you can't ask them to wait around for you to get the 'money shot'.

PANAVIA Tornado ECR #46-38 from JBG.32 formates alongside the tanker having replenished its tanks 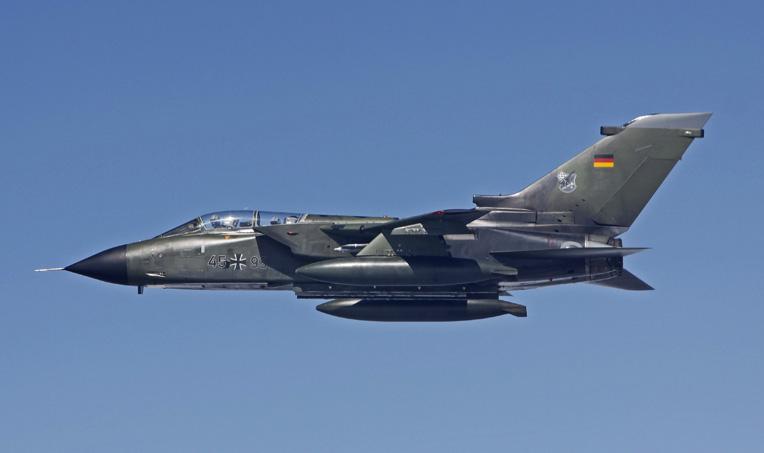 Having utilised both the BDA and the Mippers during their refuel we bid them a fond farewell, but not before they have given us plenty of photo opportunities, and as quickly as they arrived they disappear into the blue skies. We then head back in a North-Easterly direction towards our second rendezvous point at 'Rosy'.

We would like to thank the following at the100 ARW for their assistance in giving Jetwash Aviation Photos exclusive access to one of their missions;
Ssgt. Tabitha Lee, SrA. Rachel Waller, Maj. Jason Redlin, Capt. Sean McCurdy, 1st Lt. Norman Popp, Snr. MsSgt. Paul Wallace, Amn. Anthony Ellsworth
The Tornado crews of JBG.32, JBG.33 and AKG.51 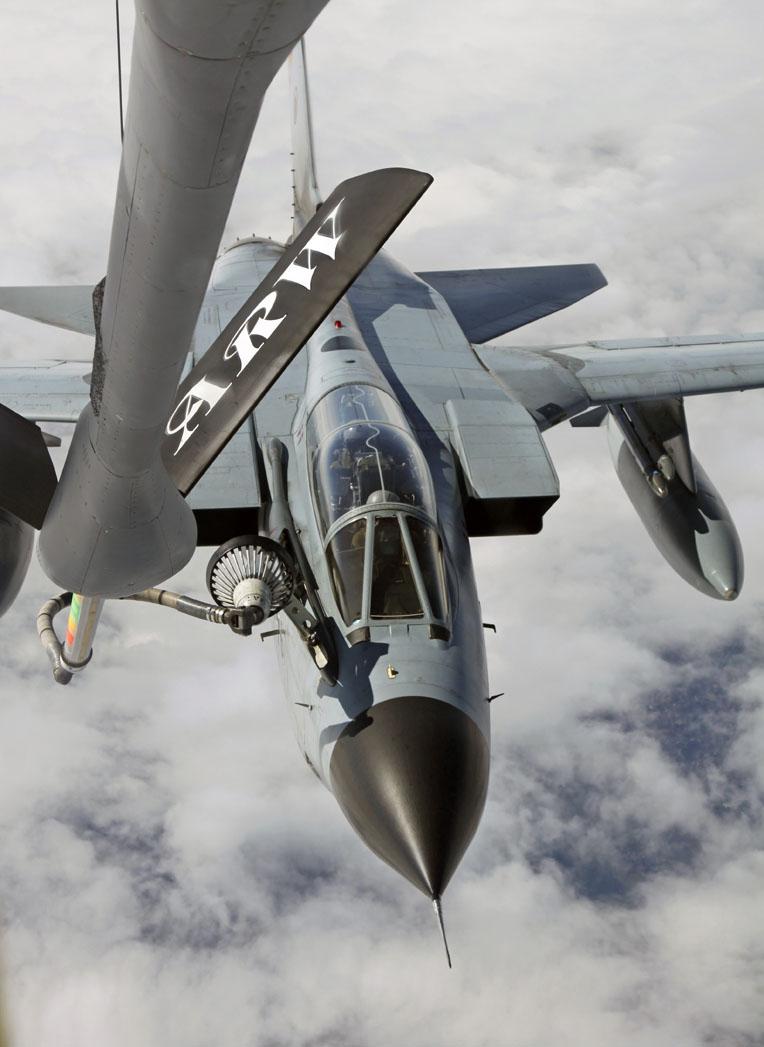 First on the scene is 'Puma 01', a Tornado ECR from JBG.32 based at Lechfeld
Ready to come onto the port-side MPRS pod it's refuelling probe is extended ready to take on gas

The other JBG.33 Tornado provides a more familiar grubby look as it formates with our tanker

In 2007, a detachment of six Tornados from Aufklärungsgeschwader 51 'Immelmann' (AKG-51) were deployed to Mazar-e-Sharif, Northern Afghanistan in support of NATO forces. The decision to send German Tornados to Afghanistan was a controversial one. Improvements in the Tornado's reconnaissance equipment were accelerated prior to the detachment, including improving the Tornado's ability to detect hidden improvised explosive devices (IED). The Tornados were withdrawn from Afghanistan in November 2010, however the photograph above and the previous ones show hat 45-67 still wears the  detachment badge on the port engine intake. 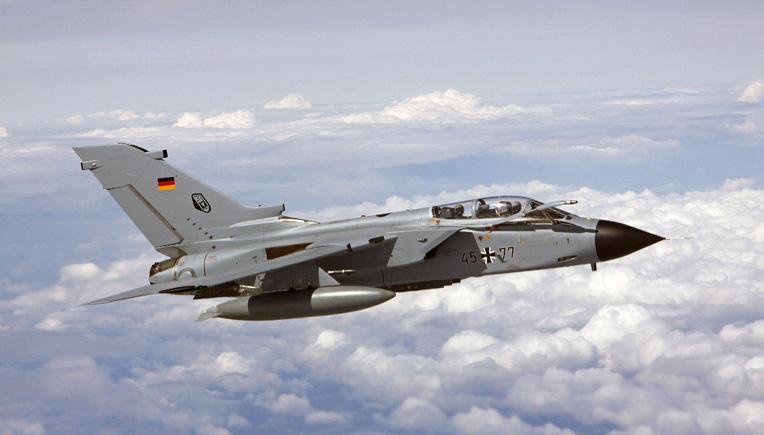 With the BDA attached a slower fuel flow than the normal high-speed boom used on U.S-manufactured aircraft such as the F-15 or F-16 is available
However, it does reduce the 'boomers' workload as there is much more responsibilty on the receiving aircraft's pilot to connect up 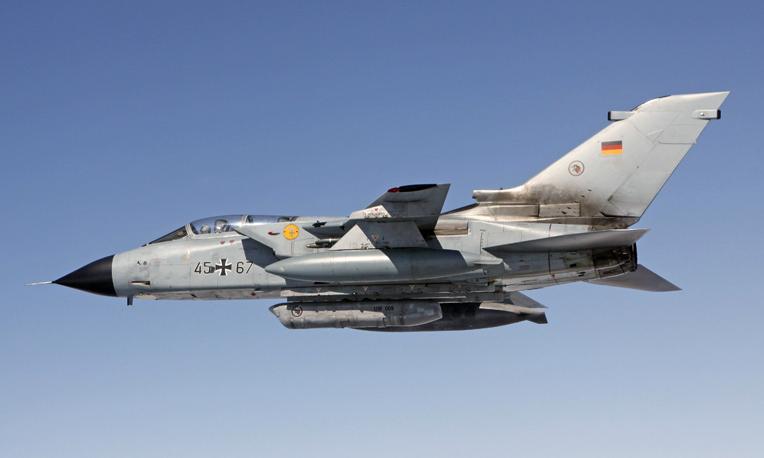 With the crew briefing over we're good to go, so we board the crew bus and head out to the aircraft. Our Boeing KC-135R aircraft is tail number 58-0016 or "Quid 65" as she is known as today, the Quid call-sign being a familiar one to air-band listeners around Europe. Our ride is some 50+ years old and has 23,000 hours on the clock, but with an expected lifespan of 39,000 hours there are a few more years left in the old girl yet!

The Electronic Combat and Reconnaissance, or ECR version of the Tornado is used in the Suppression of Enemy Air Defence (SEAD) role. Able to locate, identify and engage enemy radar systems, the built-in Emitter Location System (ELS) can detect the direction of a radar signal and can also identify the radar type. Once detected it is also capable of taking the system out utilising the AGM-88 HARM (High-speed Anti Radiation Missile).

We arrive at the first rendezvous point and the action commences. The Boomers settle themselves into position at the rear of the aircraft as we descend to around 18,000 feet. We have two Boomers on board today rather than the usual one, as Airman Anthony Ellsworth is still being overseen by his instructor, Senior Master Sgt. Paul Wallace. This makes for one less station available in the Boom Operators position, but as we have the 'Mippers' in use it is not a problem for us. Several of the aircraft will refuel from the 'Mippers' rather than the boom itself, as with many NATO aircraft that are not US-built, the Tornados use a hose and drogue method to take on fuel rather than the rigid boom system adopted by the US Air Force. The 100ARW has three pairs of Cobham/Flight Refuelling Ltd MPRS pods, one of which is attached to each wingtip together with an additional Boom-Drogue Adaptor (BDA) attached to the end of the boom. The BDA looks somewhat ungainly as it dangles from the end of the boom, but once in flight it becomes another valuable asset in the air to air refuelling scenario. The triple hose/drogue method makes it possible for two aircraft to be 'gassed' simultaneously on the two wing-tip drogues, but if the BDA is in use then the wing-tip pods cannot be used due to the necessary wing clearances between receivers not being available.

Once over 'Rosy' our first traffic are the Tornado IDS' of AKG.51 based at Schleswig-Jagel, the most Northerly of the Luftwaffe bases
'Hawk 02' waits patiently alongside the tanker whilst his wingman is gassed up

The somewhat obligatory black exhaust stains on the vertical fin are caused by the reverse thrusters on the engines, used to slow the aircraft down after landing 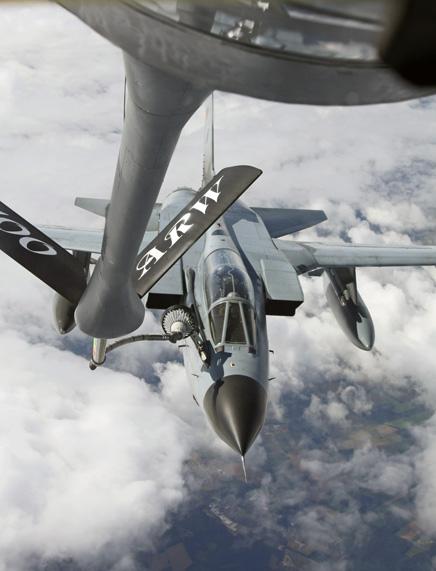 'Knight 01' poses for the camera alongside our Stratotanker
The aircraft is quite unique in that it is one of only two IDS Tornados operated by JBG.32, which isprimarily an ECR-equipped unit
It also still wears the old green camouflage pattern now replaced with the more familiar overall grey 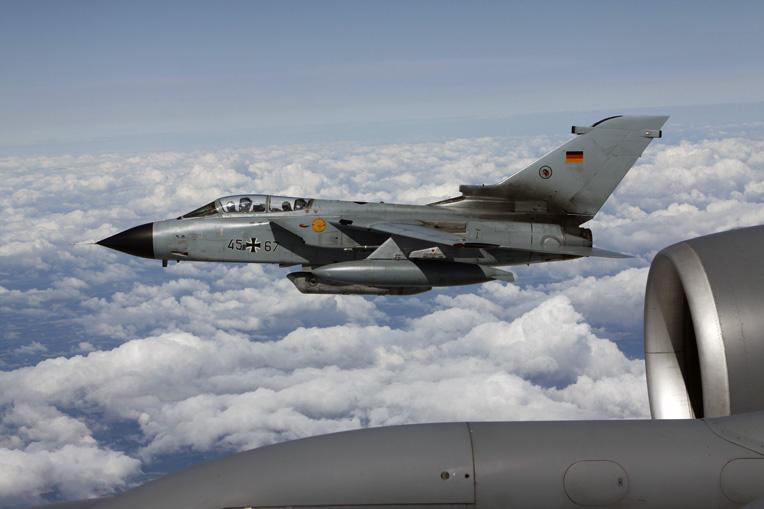 Here we have a busier schedule with five aircraft from Aufklarungsgeschwader-51 (AKG-51) based at Schleswig-Jagel, two from JBG-33 at Buchel and another singleton from JBG-32, giving us a total of twelve for the day with aircraft from all three of the Luftwaffe's current Tornado units. 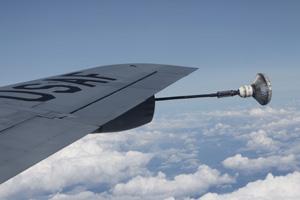