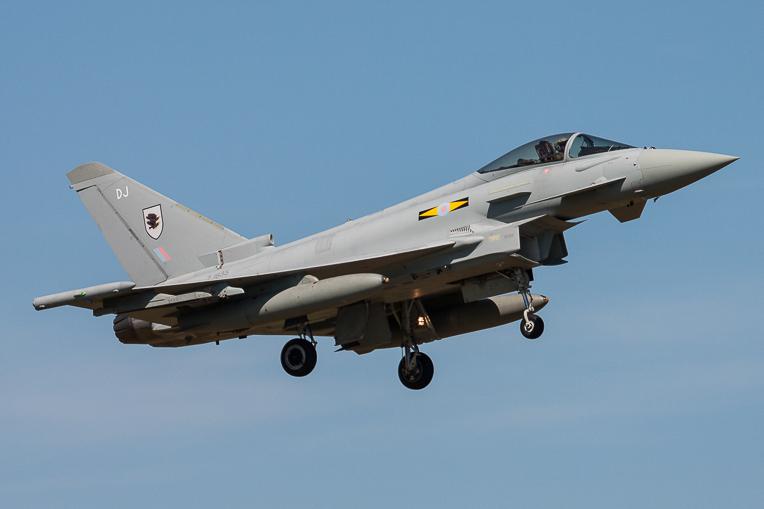 This particular aircraft was delivered to RAF Coningsby in June 2010, allocated to 6 Sqn and RAF Leuchars bound

The other unit currently based at RAF Coningsby is the Fast Jet and Weapons Operational Evaluation Unit, otherwise known as 41 (Reserve) Squadron. Flying the PANAVIA Tornado GR.4/4A the unit is tasked with the development of operational tactics, evaluation of avionics and weapons such as ASRAAM, Brimstone and Storm Shadow. The unit's tasks are carried out in close liaison with defence manufacturers, research institutions and front-line squadrons. The unit currently operates just three Tornado GR.4 aircraft in this role and as with 17(R) Squadron forms part of the Air Warfare Centre (AWC) at nearby RAF Waddington. The AWC is tasked with "developing and implementing operational-level and tactical-level air doctrine".

Coinciding with 6 Squadron's move from Coltishall on 1st April 2006, the 121st Expeditionary Air Wing (121 EAW) was also formed at RAF Coningsby on the same date. This concept of forming a Wing within the Royal Air Force provides a deployable air force structure, configured to provide discreet units of agile interoperable and capable air power, RAF Coningsby being one of nine RAF Stations which will train individual units to provide a multi-role capability. 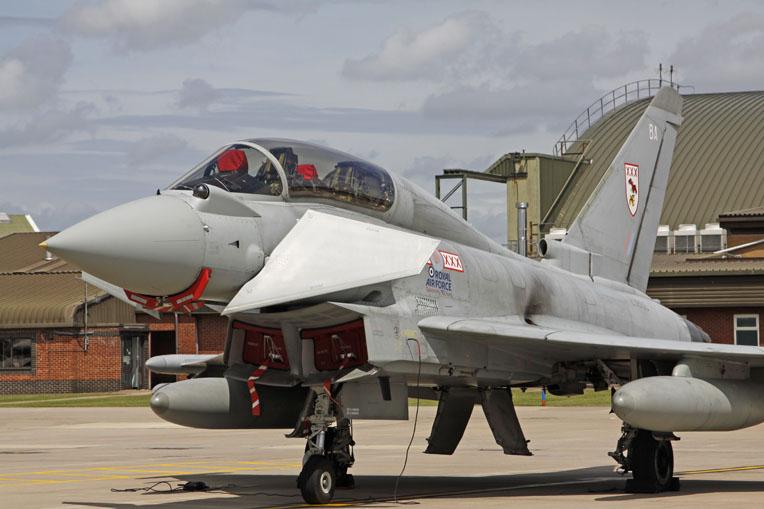 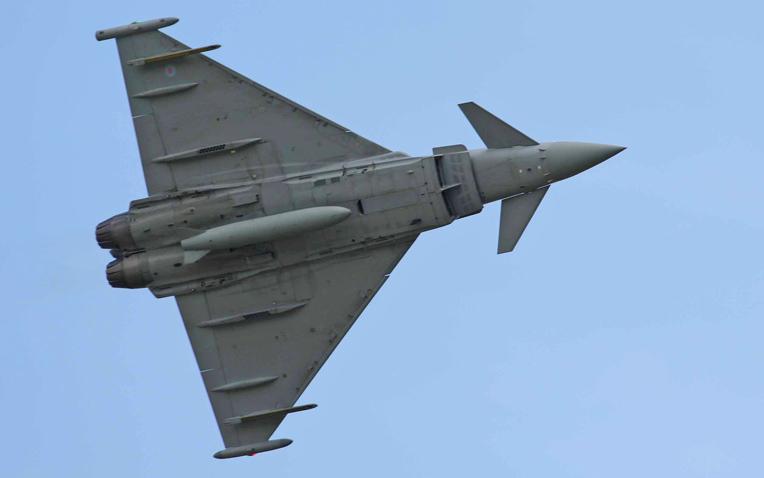 British Aerospace Typhoon:- Development of the Typhoon (otherwise known as the Eurofighter) began in 1988 with contracts for production being jointly signed between Britain, Spain, Italy and Germany approximately ten years later. With British aircraft having formally been named the Typhoon, deliveries from BAe's Warton factory began in 2003 for development and testing. The initial fifty-three 'Tranche 1' production aircraft, known as the F.2 (single seat) and T.1 (two seat) were capable of air-to-air roles only, but due to the U.K's commitments in Afghanistan under 'Operation Herrick' the urgent requirement for a multi-role capability saw them develop an additional air-to-ground role in 2008, gaining the FGR.4 and T.3 designations in the process. This upgrade in capability provided the Typhoon fleet with the ability to carry the Rafael Litening III Laser Designator Pod and the Raytheon Enhanced Paveway 2 Laser Guided Bomb (LGB). All T.1 and F.2 versions are expected to have received the upgrade to T.3/FGR.4 standard by the end of 2012. The RAF's 67 'Tranche 2' deliveries commenced in 2008 and as with 'Tranche 1' these aircraft only had an air-to-air capability, but will also receive the upgrade to T.3/FGR.4 standard by the end of 2012. Future development of the Typhoon may see upgrades take place to incorporate a Selex Galileo 'Active Electronically Scanned Array' (AESA) radar and Leading Edge Route Extensions (LERX) to provide better angle of attack and more agility. As the 'Tranche 3' aircraft start to come on stream it is likely that the earlier 'Tranche 1' aircraft will be withdrawn from service, leaving the Royal Air Force with a fleet of around 100 aircraft. 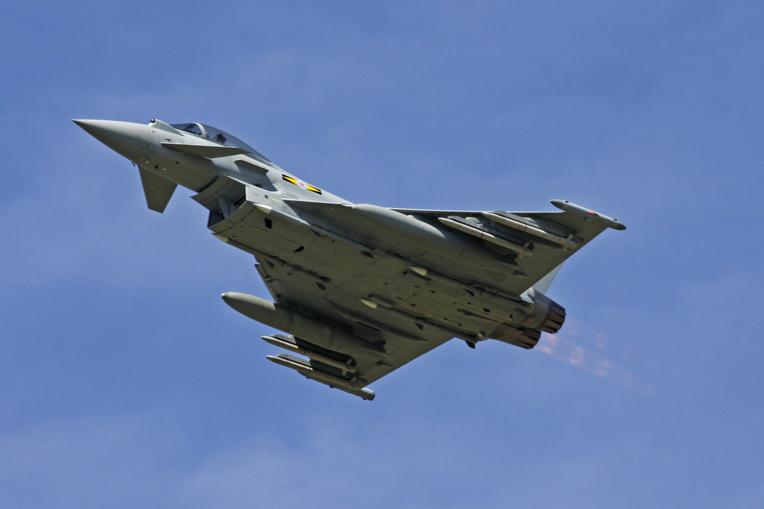 Being one of the first Typhoon T.1s to be delivered, ZJ802 from 29(R) Squadron has now been converted to T.3 standard
This close-up provides a clear view of the Forward Looking InfraRed (FLIR) on the port side of the nose as well as the large canards

Sadly a sight no longer seen in UK skies, a 6 Sqn SEPECAT Jaguar T.4 recovers to Coningsby in July 2006
The RAF Jaguar fleet was finally withdrawn on 29th June 2007 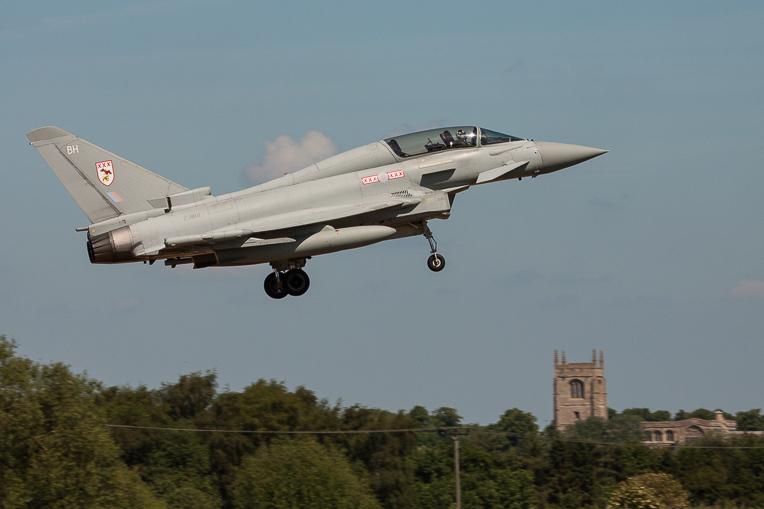 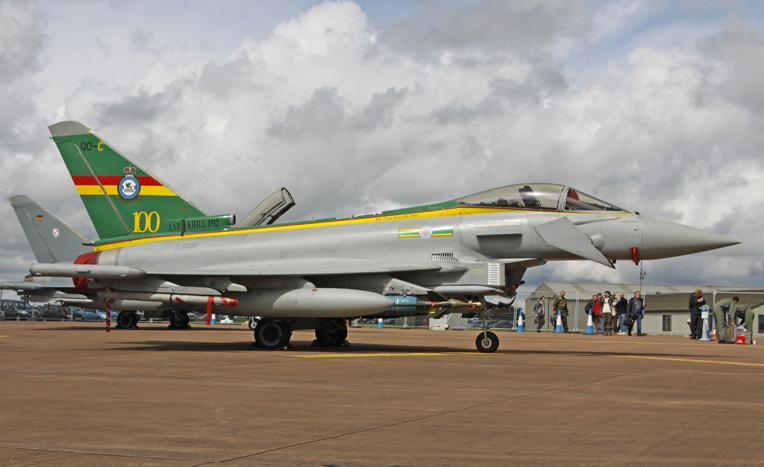 This Typhoon FGR.4 from 11 Squadron, was initially delivered to 6 Sqn
It is seen on the Coningsby ASP wearing the marks of 11 Squadron

This British Aircraft Corporation Lightning F.6 is an example of the last single-seat fighter aircraft to enter service with the Royal Air Force prior to the arrival of the British Aerospace Typhoon 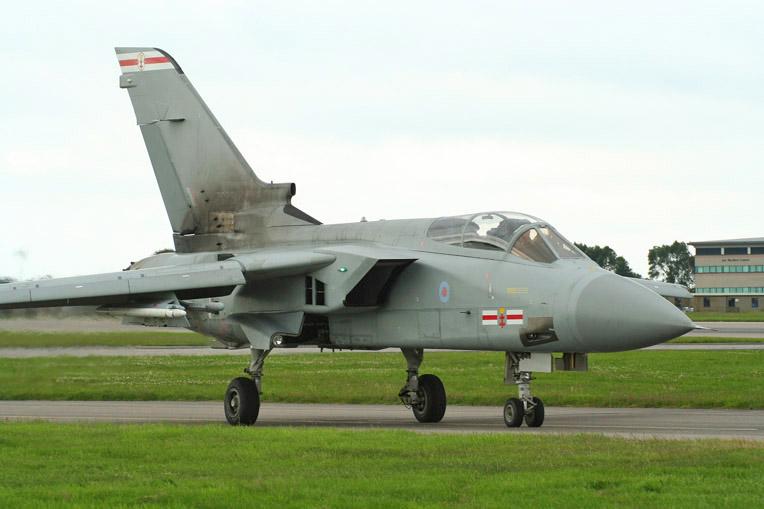 Although both the aircraft seen above on Coningsby's ASP are to FGR.4 standard,

Fightertown-UK:-  better known as Royal Air Force Coningsby, is one of two air defence fighter bases in the United Kingdom (RAF Leuchars being the other) and currently the primary UK airbase for the British Aerospace (BAe) Typhoon fleet. Commencement of Typhoon operations began with the relocation of 17(R) Squadron (the current Test & Evaluation Squadron for the Typhoon) to Coningsby on 1st April 2005, which was tasked with bringing the BAe Typhoon aircraft into service. This was then followed on the 4th November 2005 when 29 (R) Squadron stood up as the Operational Conversion Unit (OCU) for the type.

March 2006 saw 3 Squadron, formerly equipped with the Bae Harrier at RAF Cottesmore move to Coningsby as the first operational Typhoon squadron. The formation of 3 Sqn marked the beginning of the transition of the Royal Air Force to a more agile, capable, flexible and adaptable expeditionary force, better equipped to meet the demands likely to be placed upon it in the future. With the closure of RAF Coltishall, 6 Squadron then relocated to RAF Coningsby on the 1st April 2006 to fly the remainder of the SEPECAT Jaguar fleet until its untimely withdrawal. Having subsequently stood up at RAF Leuchars, Scotland in September 2006 the squadron continued its build up at RAF Coningsby, where a number of the unit's aircraft could be found taking up residence for some time prior to their relocation to RAF Leuchars. On 29th March 2007, 11 Squadron, a former PANAVIA Tornado F.3 unit based at RAF Leeming also re-formed at Coningsby as the second front-line Typhoon squadron at Coningsby alongside number 3 Squadron. Numbers 3, 11 and 29(R) Squadrons currently come under the auspices of number 1 Group Air Command based at RAF High Wycombe, Buckinghamshire. 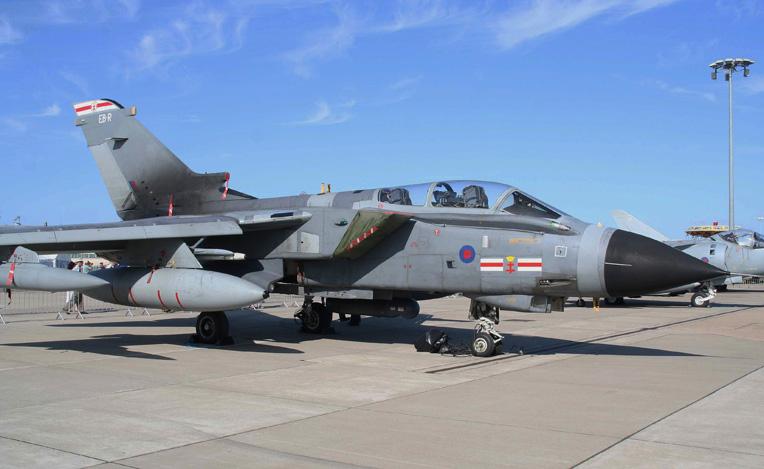 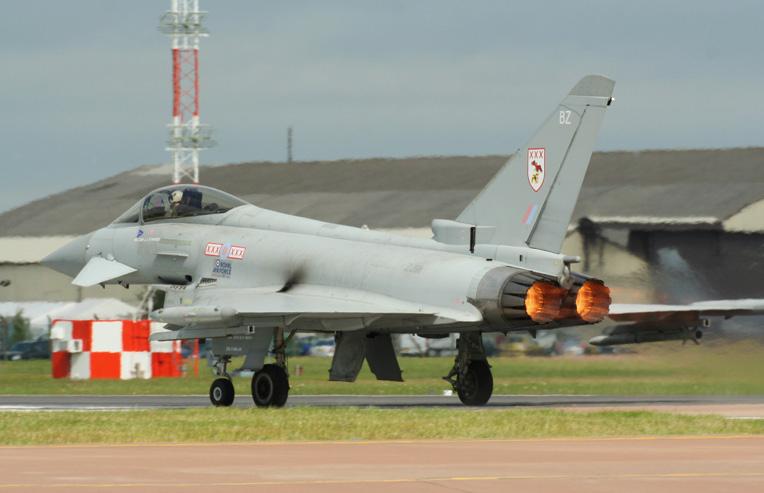 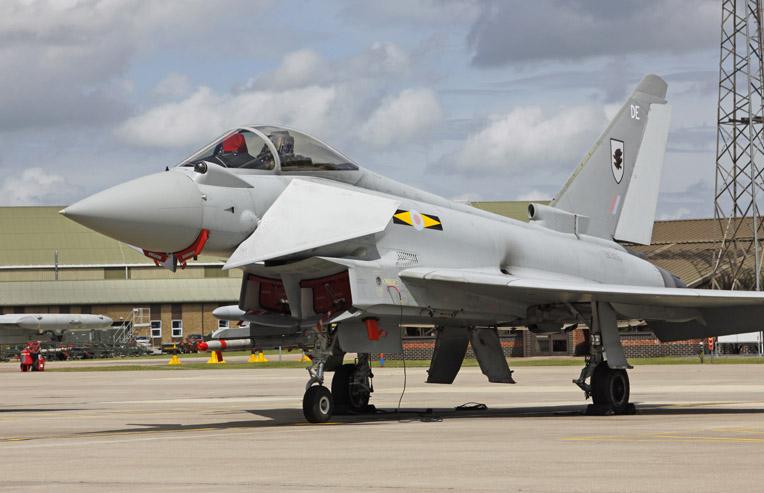 This FGR.4 wears the markings of 17(R) Sqn, the Typhoon 'Test & Evaluation Squadron' 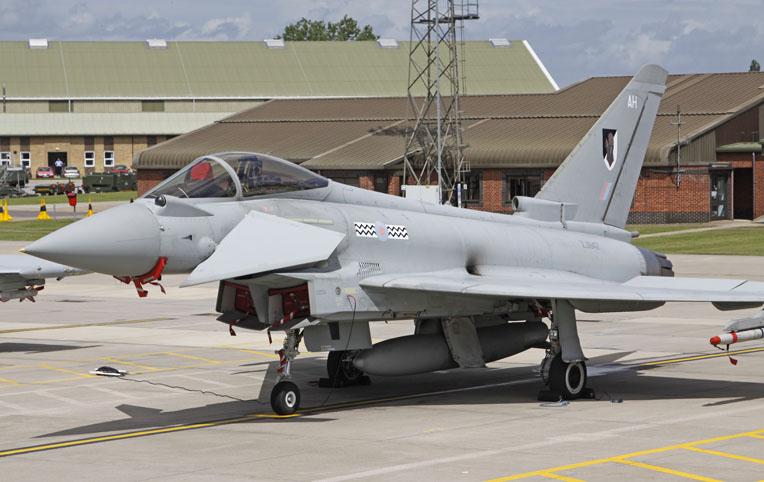 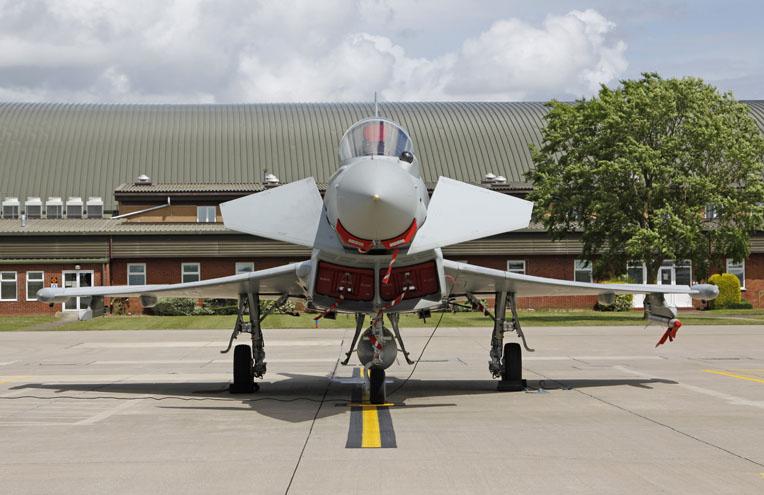 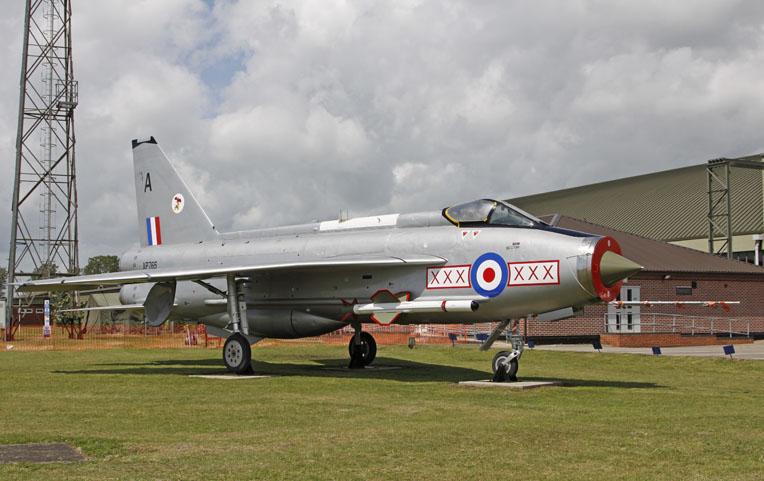 PANAVIA Tornado:- The Tornado is a variable geometry, two-seat, day or night, all-weather attack aircraft and is powered by two Rolls-Royce RB.199 after-burning turbofan engines. The GR.4 version is the RAF's current frontline operational version of the aircraft and is capable of low level supersonic flight, with the ability to fly automatically at low-level using Terrain Following Radar (TFR) to avoid enemy ground radar. It is also equipped with Forward Looking Infra-Red (FLIR) and has Night Vision Goggle (NVG) capability. The Tornado GR.4 is capable of carrying five 'Paveway IV' Laser Guided Bombs (LGB) or two MBDA 'Stormshadow' cruise missiles. Its arsenal also boasts the MBDA 'Brimstone' anti-tank missile, the MBDA 'ALARM' for use in Suppression of Enemy Air Defence (SEAD), the 'Litening III' laser designator pod, the 'RAPTOR' reconnaissance pod, Paveway II & III LGBs, AIM-9L Sparrow for self defence and also sports a 27mm Mauser cannon in the starboard nose section capable of delivering up to 1700 rounds per minute. Having entered service with the Royal Air Force in the late seventies it is now in the twilight of its career, but still provides crucial frontline service with six RAF squadrons based at RAF Lossiemouth and RAF Marham. 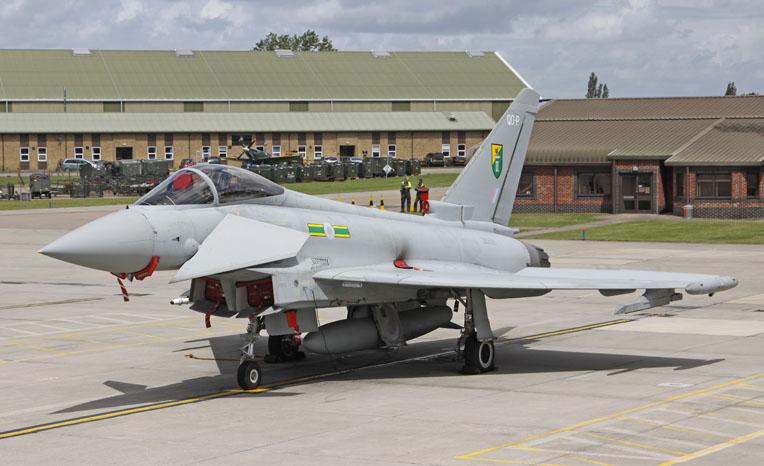 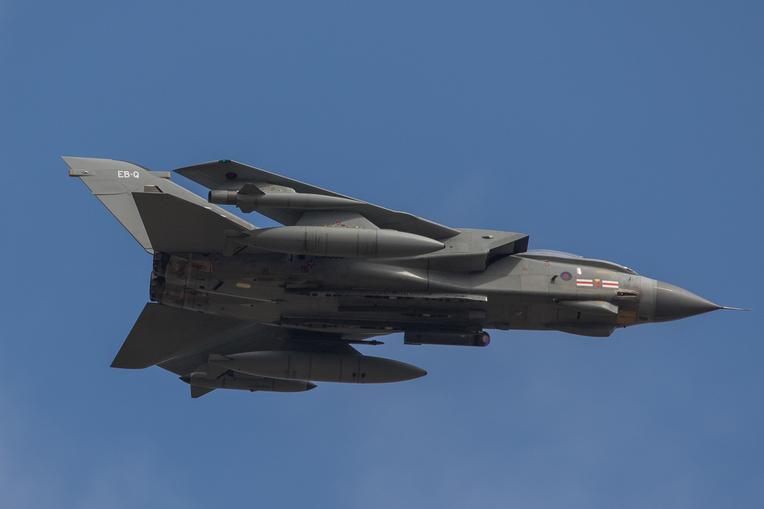 The Panavia Tornado F.3 was the stalwart of the UK air defence system for many years at RAF Coningsby

A fully armed 11 Sqn Typhoon gets airborne from Coningsby on a QRA. The weapons fit described above can be seen in the photo;

Set against a classic Coningsby backdrop, another 29(R) Sqn Typhoon recovers to Runway 07

Typhoon FGR.4 #ZJ918 of 3 Squadron about to land on Runway 07 at RAF Coningsby 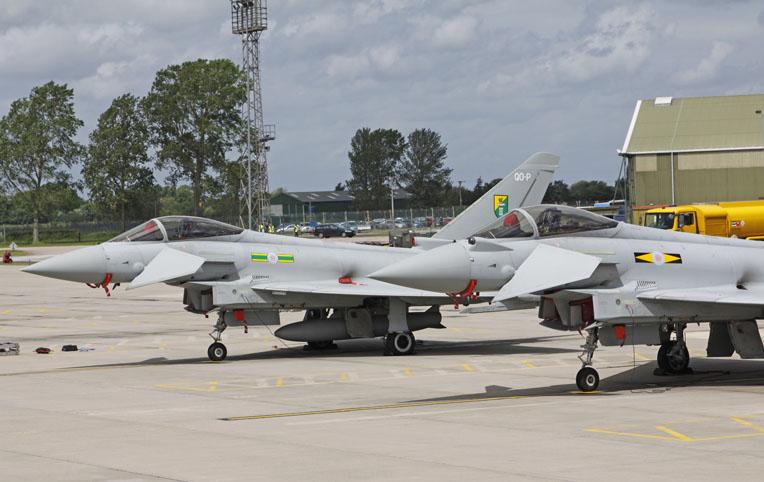 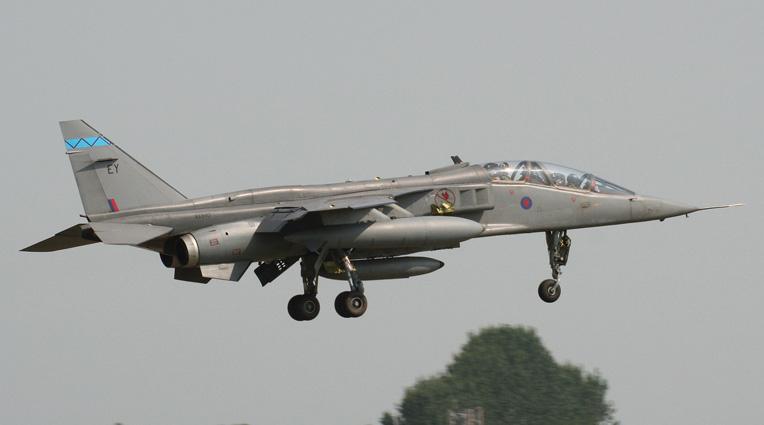 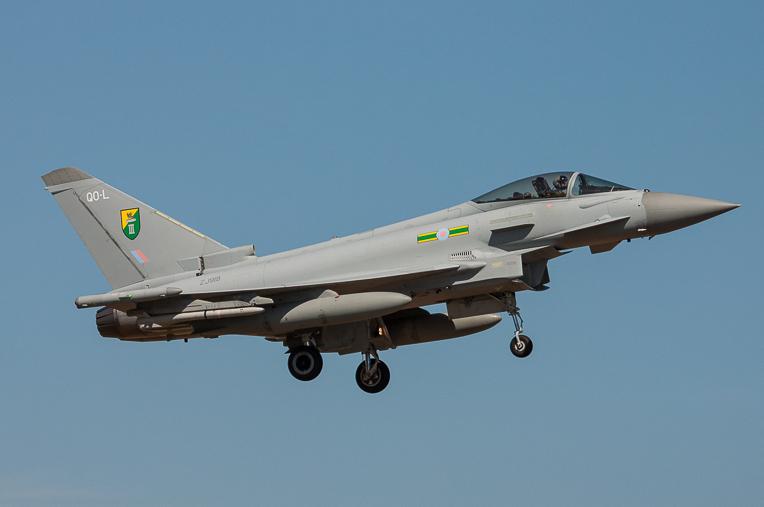 History of RAF Coningsby:- The building of RAF Coningsby commenced in 1937 as a Bomber Command station and it was still under construction at the outbreak of World War 2. The first Handley Page Hamden bombers arrived in February 1941, followed by the famous 617 Squadron 'Dambusters' arrival in August 1943. With the arrival of 'The Jet Age' at Coningsby in 1953, the English Electric Canberra took up residence until 1962, when the 'V' Force with three squadrons of the Avro Vulcan were based at the station until 1966, when it then moved to Fighter Command control and the ubiquitous McDonnell-Douglas Phantom FGR.2 entered RAF service there in August 1968.

The Hardened Aircraft Shelters (HAS) started to appear in 1981 to offer better protection for the based aircraft and this heralded the arrival of the Tornado F.2 in November 1984 with 229 Operational Conversion Unit (OCU) taking up the task of training aircrew for the frontline Tornado ADV squadrons. During 1987, 29 Squadron began to phase out its Phantom aircraft and it became the first squadron to re-equip with the F.3 version of the Tornado interceptor. In April 1987 the Phantom OCU moved to RAF Leuchars in Scotland and 5 Squadron then moved into Coningsby equipped with the Tornado F.3 alongside 29 Sqn.

The Tornado F.3 (otherwise known as the Tornado Air Defence Variant, or ADV) operations continued in full swing until 2005 when the Typhoon started to enter service at RAF Coningsby, with the Operational Evaluation Unit (OEU) moving in, followed by the Operational Conversion Unit 29(R) Squadron, giving up its Tornado aircraft to other units. The rest as they say is history, and to this day RAF Coningsby continues to play a major role in both the ongoing development of the Typhoon and also the protection and defence of UK air space. 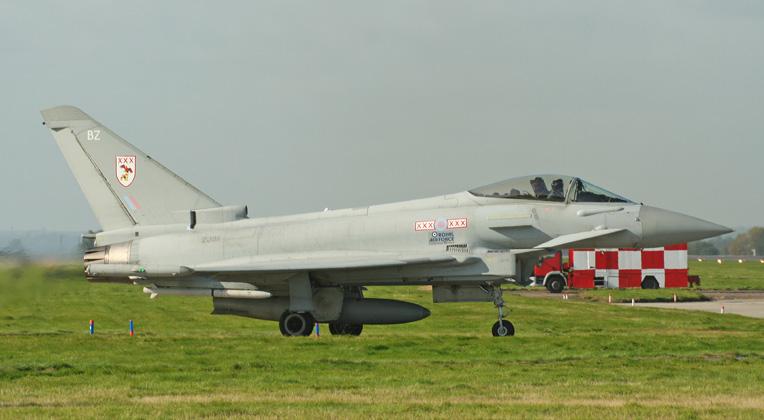 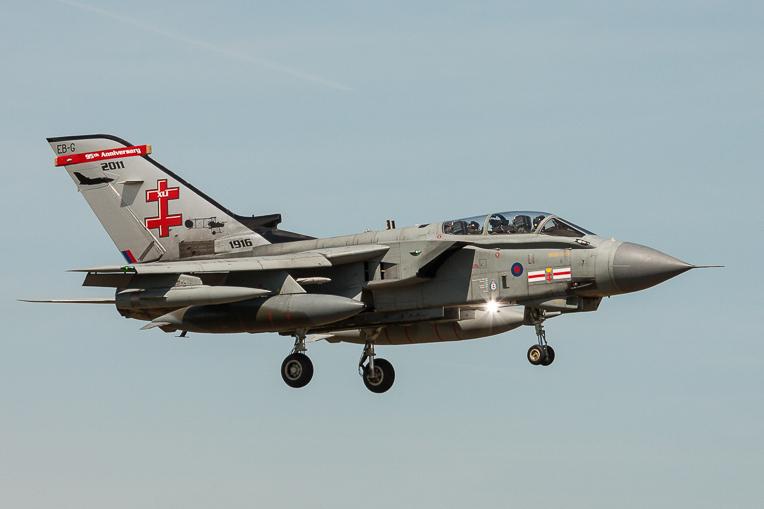