Back on terra firma after a gruelling 8+ hour mission. Thanks guys!

Having filled its tanks to the brim, 'Fist 15' quickly departs to the starboard side of the aircraft to let its wingman move in

Operation Unified Protector commenced on 23rd March 2011, with NATO taking total control of the no-fly zone on 24th March. The air operation is commanded out of the NATO Joint Force Command in Naples, Italy under the control of Lt. Gen. Charles Brouchard of the Canadian Armed Forces. Five NATO Airborne Warning & Control Systems (AWACS) Boeing E-3 Sentry aircraft along with approximately forty other coalition aircraft, together with tanker support from aircraft such as ours, that are not officially assigned to OUP, ensure a 100% effective no-fly zone around the Libyan coastline. The coalition enforcing the NATO mandate consists of the 28-Nation NATO Alliance, together with Sweden, Ukraine, Qatar, United Arab Emirates, Saudi Arabia and Jordan.

It's early morning 19th July 2011, 4.50am to be precise, and we find ourselves at the main gate of RAF Mildenhall awaiting our contact from Public Affairs. Having not been notified of our flight time until 11pm on the 18th we had gotten little sleep, however the knowledge that within a few hours we would be off the coast of Libya ensured we stayed wide awake. Having gone through the necessary vehicle search and formalities at the gate, 5.20am finds us in the 100th ARW crew building to meet up with our crew for the mission. First to greet us is Sr.A Ronnie Echavarria (the boomer), followed by our co-pilot, 1Lt. Jon Bourke, who has just returned from a posting in 'The Desert'; and finally our aircraft commander, Maj. James Muniz.

We are given the privilege of sitting in on the mission briefing, where we are told that our traffic for today is F-16s; USAF, Dutch and UAEAF to be precise. Our aircraft call sign will be 'OUP 001', changing to 'Exxon 001' once we go tactical over the Mediterranean. Planned departure time is 8.45am, so we have time to chat and take a few photos of the crew room and squadron bar, which is adorned with various mementos before we board the bus to the flight line. We prep our camera gear and ensure everything is set up OK, no second chances today and it's imperative we have the correct camera settings. 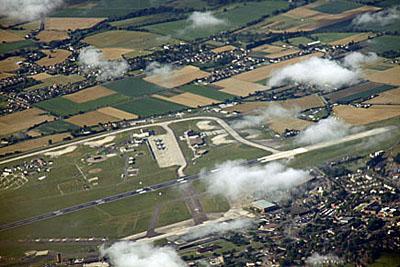 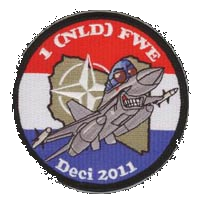 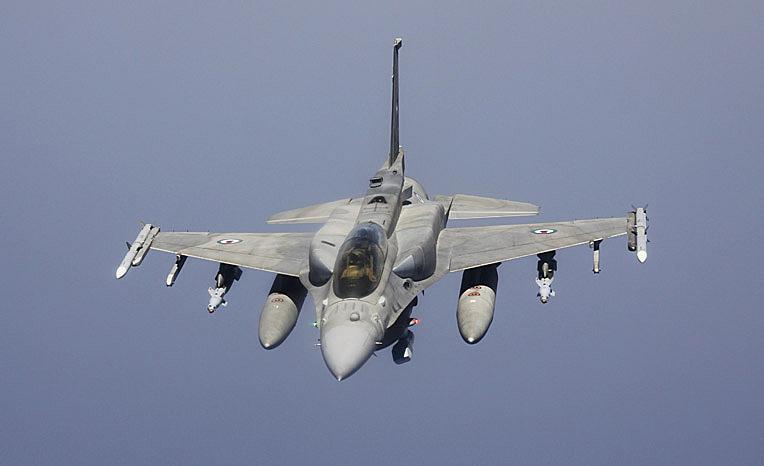 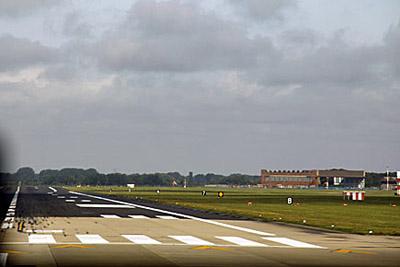 Having loaded up our gear we climb up the ladder into the aircraft flight deck. The next 30 minutes or so are spent checking systems, starting the engines and running us through the various safety & evacuation procedures. Number four engine's oil pressure is a little low, but happy that it is not a problem Maj. Muniz tells 1st Lt. Jon Bourke to "keep an eye on it". 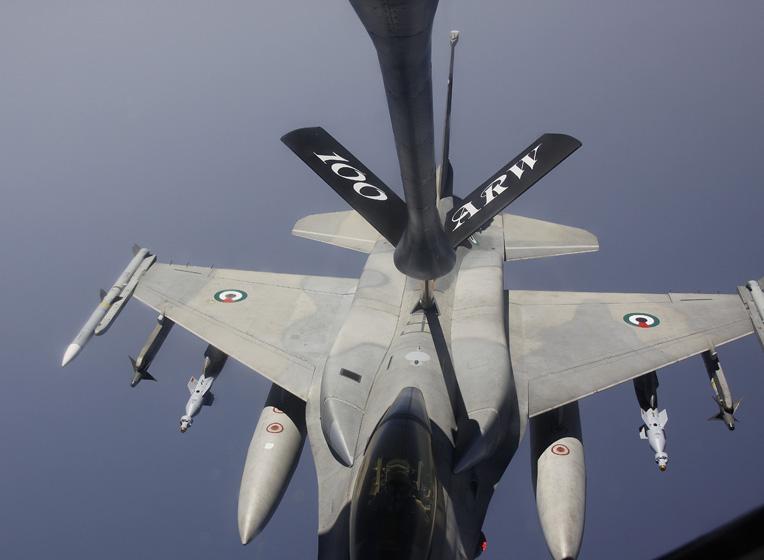 Part of the six-strong RNLAF contingent supporting OUP and operating out of Decimomannu, Sardinia

This 1 Squadron UAEAF 'Desert Falcon' sucks in the fuel under the watchful eye of the boomer, SrA. Ronnie Echavarria 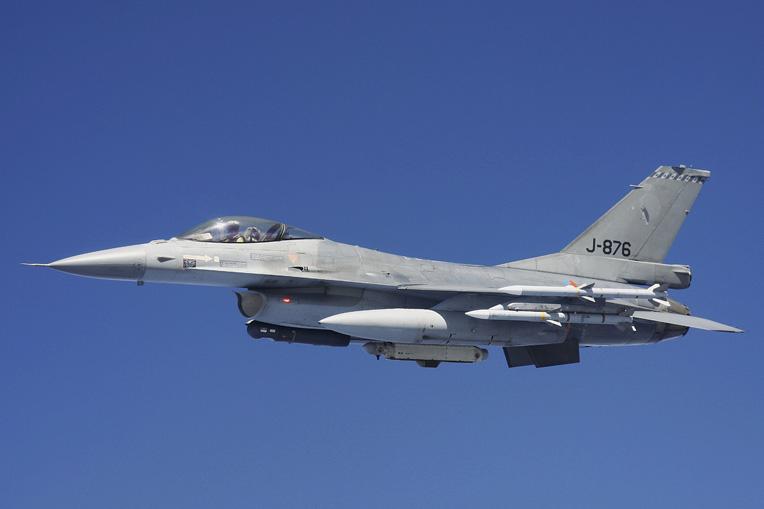 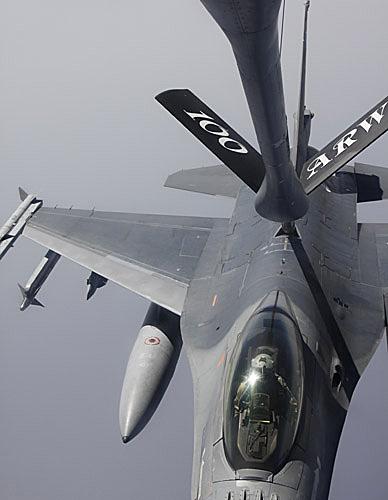 Next up for gas is another UAEAF Falcon, this time a twin-seat F-16F using the call-sign 'Fist 16' 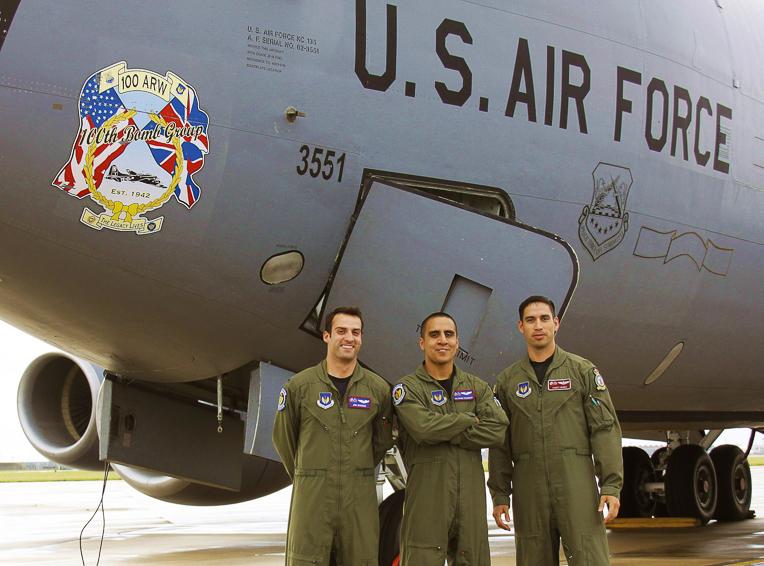 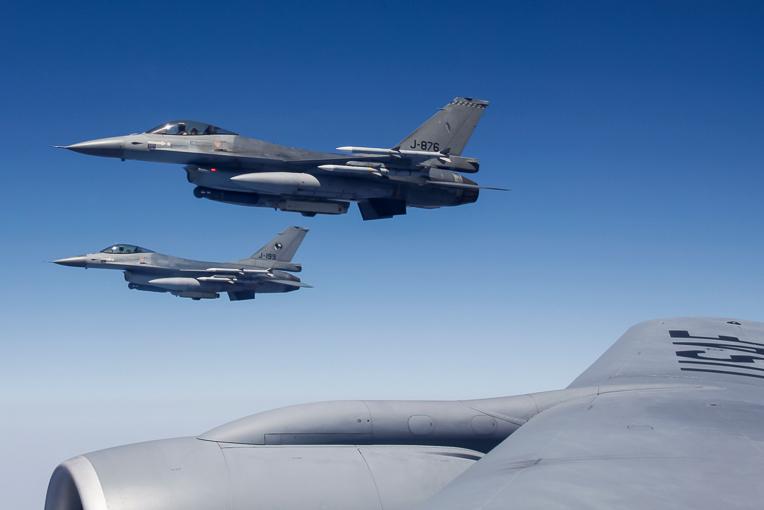 Our second lot of traffic are two RNLAF F-16AMs from 312 Squadron based at Volkel Air Base, Netherlands
These guys are happy to give us some photo opportunities as they are on station for 3 hours, so have some time for us
We were to see the same two aircraft about an hour later for another top-up before we departed back to the UK 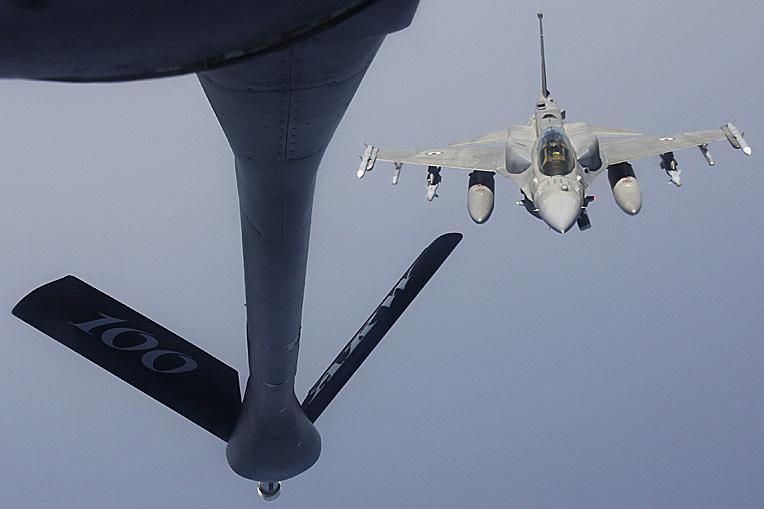 The next few hours see us pass over London, then track over the coast and into French airspace, passing to the west of Paris, over the Alps (avoiding Swiss air space due to the nature of our mission and Switzerland's neutrality), on to Turin and down the west coast of Italy, over Elba and into Maltese airspace at flight level 350 (35,000 ft) and Mach 0.84 (290 kts). Having reached the area of operations it is time to go 'tactical'. We inform Malta Air Traffic Control and are passed to 'Tanker Ops', at which time we also change our call sign to Exxon 001.

We set up a race-track pattern some 80 miles off the Libyan coast at 28,000 ft (about the maximum used for re-fuelling. Normally 21-25,000 ft would be preferable). The orbit we are in is spread over an approximate area of 20 miles by 18 miles, with three levels within the pattern (high, medium and low). Over the radio chatter of the next 3 hours we can hear other tanker aircraft communications with an aircraft using the call-sign 'Steeljaw' (presumably an E-3 AWACS aircraft co-ordinating the tanker ops), together with various tactical flights (mainly F-16s) linking up with the tankers for gas so as to stay 'on station'. Without much warning we are told our first traffic is ready for some gas and it's a mad rush to the back of the aircraft to get into position. The boom is dropped and we eagerly scan the cloud below us looking for our first 'chicks'. Suddenly out of the cloud there she is, a United Arab Emirates Air Force F-16E Desert Falcon.

During our eight and a half hour mission we off-loaded 38,000lbs of fuel, the equivalent to 6,300 US Gallons, and having been on station for approximately 3 hours it was time for us to return to RAF MIldenhall. We took roughly the same route home as we had taken on the way down, losing our Exxon 001 call sign and picking up OUP 001 again once we left the refuelling area. A fairly uneventful trip back and time to take in what we had experienced. Things got a little more exciting as we hit UK airspace due to a number of storms on our approach route to RAF Mildenhall. Nevertheless, the crew did a sterling job of weaving us through the red patches indicating heavy storms on the weather radar, and 1st Lt. Jon Bourke got us back on the ground without any hiccups. 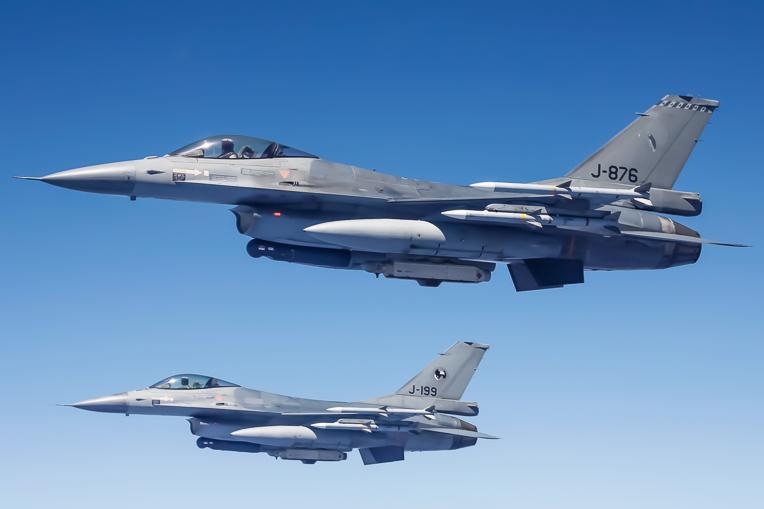 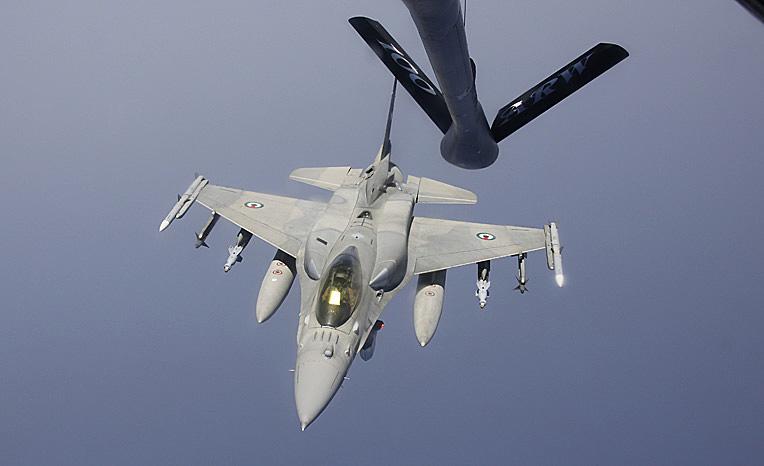 Our last 'chicks' are fuelled up and time for us to depart back to UK airspace. One last shot for the camera 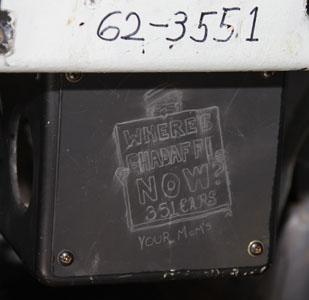 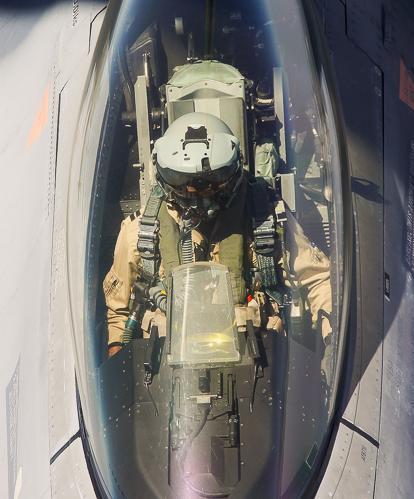 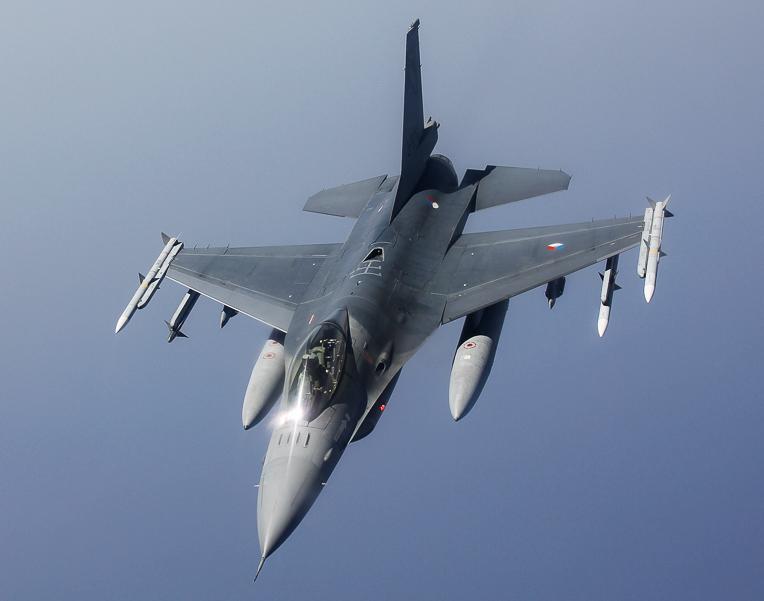 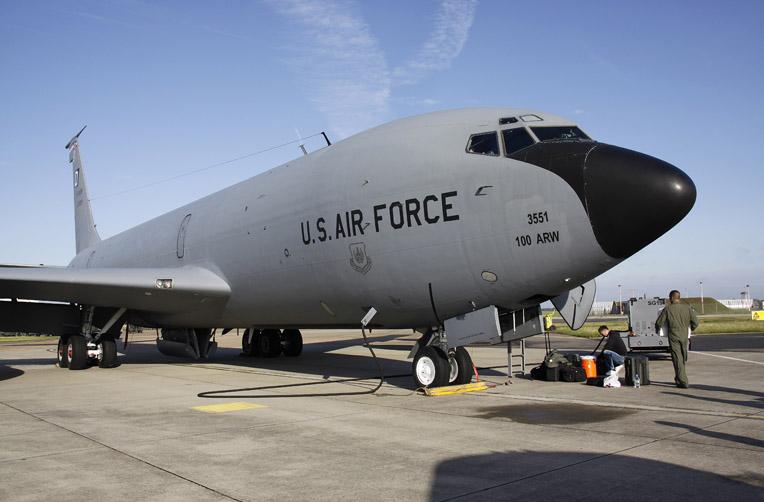 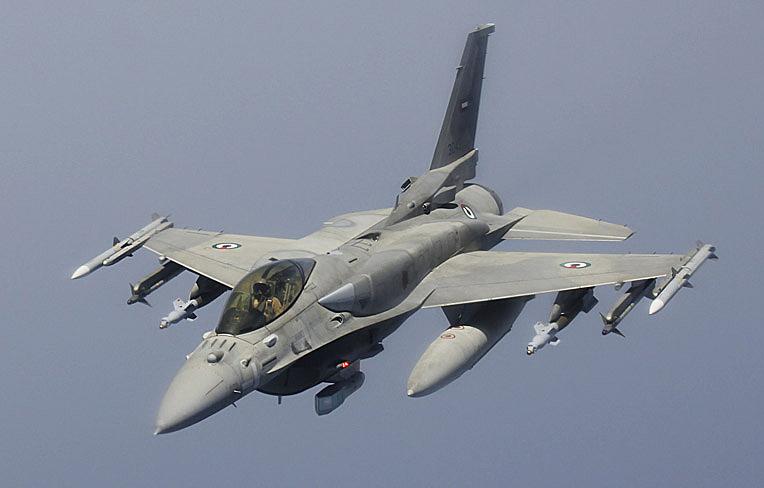 08.50 local time and we are at the end of Mildenhall's Runway 29 ready to depart, the throttles are pushed forward and we start to roll

"V1" is called, followed by "committed" and within a few seconds we are in the air, making a 180 degree right turn back over RAF Mildenhall 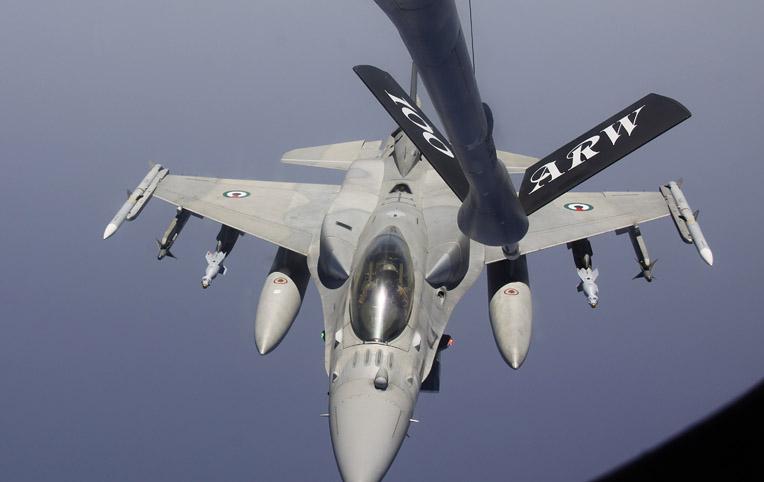 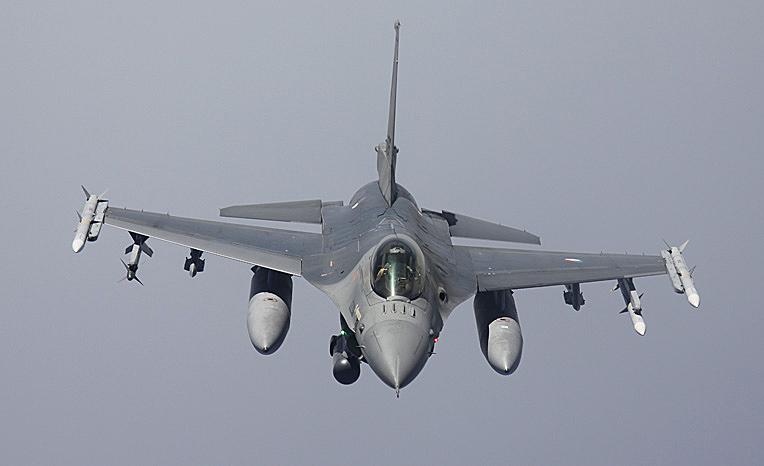 The unit is currently under the command of Lt. Col. Andre Steur and will carry out the RNLAF mission until September. The aircraft are not deployed in attacking ground or sea targets, but are conducting surveillance flights, gathering intelligence (ISR) and monitoring air traffic in and out of Libyan air space. The RNLAF F-16s we saw were equipped with a weapons load of three AIM-120B AMRAAMs (Advanced Medium Range Air-to-Air Missile), one short-range AIM-9L Sidewinder, an AN/ALQ-131 ECM (Electronic Counter Measures) pod and an AN/AAQ-28(v) Advanced Targeting Pod (ATP). Due to the distance between Decimomannu and the area of operation, the RNLAF have average mission times of some 5+ hours and with the detachment not actively participating in hitting any ground targets, the KLu F-16s have primarily been involved in COMAOs (COMbined Air Operations) providing escort for aircraft from other air forces that have been assigned ground targets.

#62-3551 is our aircraft for today, one of the newer KC-135s in the USAF inventory, but still nearly some 50 years old! She sits on the flight line bathed in sunshine (a miracle after the weather of the last couple of days), with the ground crew having already prepared her for the 8+ hour mission. We have a full load on board today and so I ask Major Muniz if we will be using the 'under-run' on Mildenhall's Runway 29. "Oh yeh" he says, with a wry smile. "Anything I can do to stop the traffic and slow things down a little". The crew are quite jovial, particularly bearing in mind the early start and the fact that they have a long mission ahead of them, much of which will be spent watching instruments and monitoring radio traffic. Whilst the crew prep the aircraft we take time to look around and familiarise ourselves with the aircraft, ensuring we take a look at the area surrounding the boomers position to check the windows aren't too dirty, as that will screw up any chance of decent shots of the receiving aircraft. Whilst stumbling around we come across this chalked graffiti (left) above the radio operator/boomers position at the rear of the flight deck. So, where is he???

Nobody Kicks Ass Without Tanker Gas! 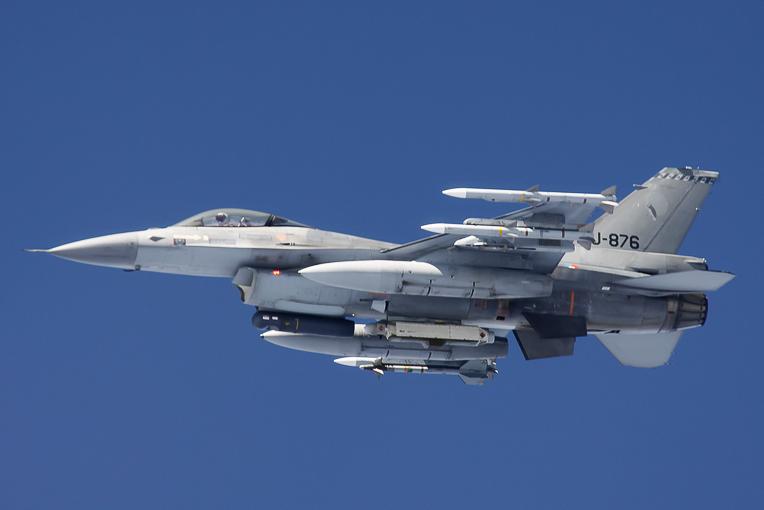 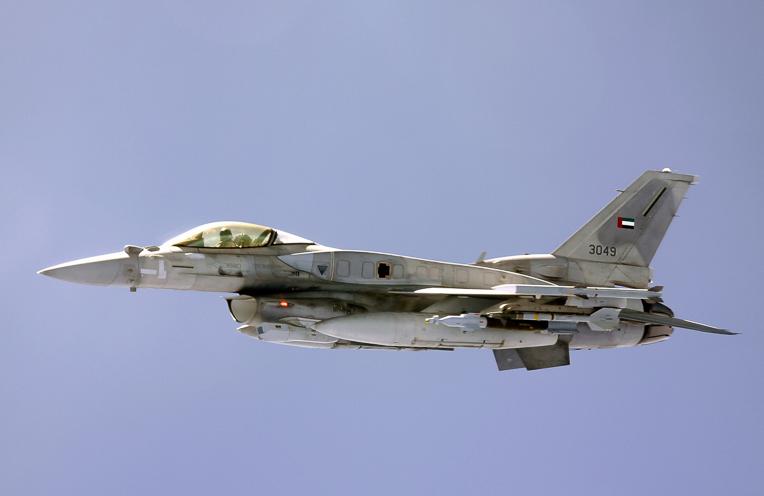 Coming in from the left hand side of the KC-135 the first aircraft plugs-in to the boom,

July 19th 2011, NATO warships and aircraft are patrolling the approaches to Libyan territorial waters as part of Operation Unified Protector (OUP). Their mission is to reduce the flow of arms, related material and mercenaries to Libya, as called for in United Nations Security Council Resolution 1973 (UNSCR 1973). Jetwash Aviation Photos is on board Boeing KC-135R Stratotanker #62-3551 of the 100th Air Refuelling Wing based at RAF Mildenhall, England, as it circles off the coast of Libya providing much needed fuel to thirsty coalition aircraft enforcing the 'no-fly zone'. 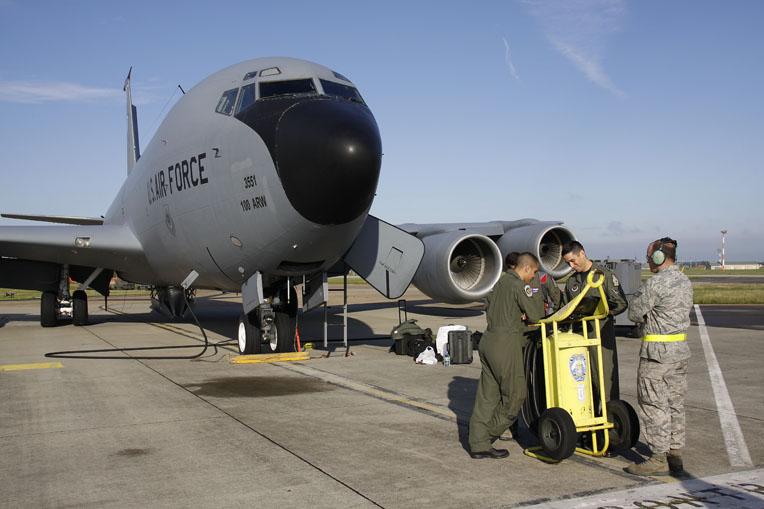 Following UNSCR 1973, the Royal Netherlands Air Force sent six F-16 aircraft to Operation Unified Protector from Leeuwarden Air Base's 322 & 323 Squadrons on 24th March 2011, with the first mission being flown on 28th March. The six F-16s (which included two spares) are based at Decimomannuu, Sardinia, with the operation now being in the hands of Volkel Air Base crews, who took over the detachment on 27th June. The KLu detachment is known as 1 (NLD) Fixed Wing Element and after a request from NATO, a decision was made to extend the Dutch contribution to OUP for a further three months. 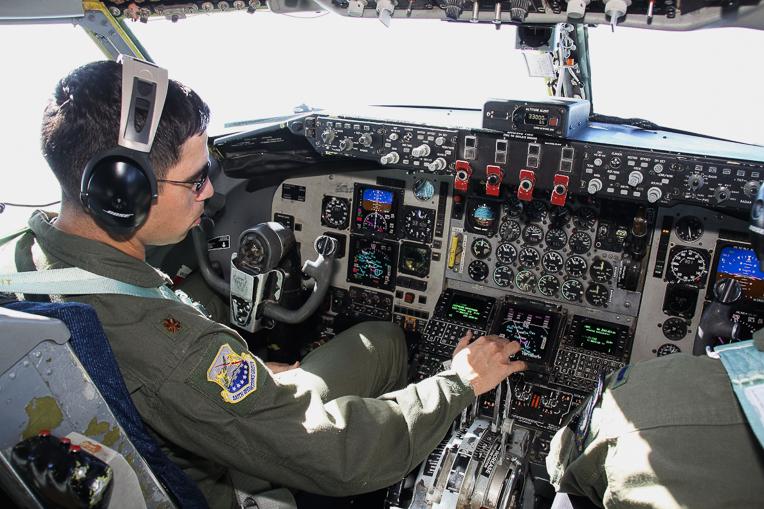 As Gadaffi has routinely and purposely placed military equipment in close proximity to civilian institutions, schools and houses it has become increasingly more difficult to minimise collateral damage to the infrastructure when attempting to hit military targets. It is therefore imperative that the coalition makes use of its precision munitions when striking targets so as to minimise any risk of civilian casualties. The UAEAF F-16E above carries an AIM-120C AMRAAM on each wing-tip, AIM-9M Sidewinders on the two outer pylons and a Raytheon GBU-12 Paveway II Laser Guided Bomb (LGB) on each of the inner pylons, next to the large drop-tanks. Under the engine intake can be seen a Northrop-Grumman AN/AAQ-32 IFTS Targeting pod, which provides day/night, ground/airborne targeting capability in all weather conditions.

The UAEAF contingent in Operation Unified Protector is operating out of Decimomannu Air Base in Sardinia, with six F-16E/F Desert Falcons and six Dassault Mirage 2000-9s as part of its commitment to the NATO led operation, with the F-16s providing a state-of-the-art munitions platform. The UAEAF contingent initially deployed from Al Dhafra air base to Decimomannu on 27th March, later moving to Sigonella, Sicily on 26/27th April, primarily to reduce the distance to the primary area of operations.

F-16E #3049 from 1 Squadron, call-sign Fist 15, sits alongside our KC-135R whilst his wingman takes on fuel
And as quickly as they appeared, the two UAE Desert Falcons departed. "A mission to carry out" according to the flight lead 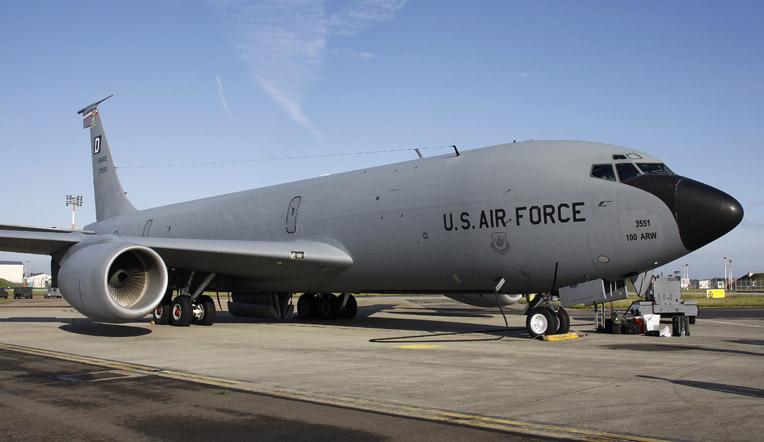