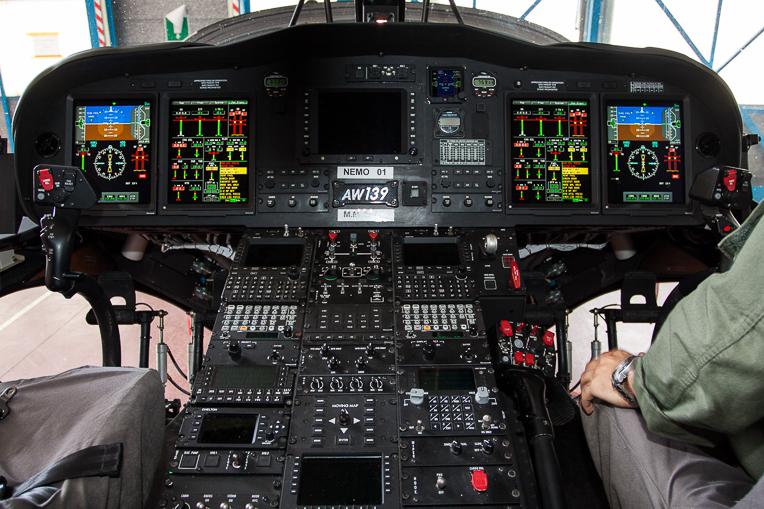 Pilot training takes a similar format to that of the Marina Militare Italiana's (MMI) Aviazione Navale, in that pilot selection commences with training in the United States with Training Wing-6 and their Beechcraft T-6 Texan IIs at Naval Air Station (NAS) Pensacola, Florida; followed by a stint on the Beechcraft T-44 at NAS Corpus Christi, Texas. However unlike the MMI pilots, they then return to Italy for rotary-wing training with the Aeronautica Militare (Italian Air Force) at Frosinone, where they fly the BredaNardi-Hughes NH.500 with 72º Stormo. Once qualified and assigned to a permanent post, the pilots work on a quarterly cycle of a minimum 40 hours of flying time per year. In addition to this they conduct a further 10 hours using the simulator; AB.412 pilots going to the Oxford Aviation Academy in Stockholm, Sweden; with AW.139 pilots using AgustaWestland's simulator at the Alessandro Marchetti Training Academy in Sesto Calende, where they conduct both Instrument Check and Emergency Procedure ratings.

The Agusta-Westland AW.139 consists of a fleet of four helicopters, delivered between July 2010 and February 2011. The AW.139 has a fully digitised Honeywell-Primus Epic integrated avionics suite, a 4-axis Digital Automatic Flight Control System (DAFCS) which allows the crew to select various modes of automatic flight for SAR missions. Even in extreme conditions it allows the pilot of the aircraft to hold a perfect fixed point, and is significantly more effective than the one mounted on the AB.412CP. The cockpit also has full colour display multi-function display (MFD) screens and is compatible with night vision goggles. To assist in SAR duties there is an advanced FIAR-Bendix 1500B+ search radar; the nose turret contains a Star Safire QVIP FLIR with a laser illuminator and pointer, plus two LLLTV cameras. An automatic identification system, direction finder, and aeronautical and naval VHF radios complete the avionics package. A Night-Sun searchlight is mounted on the lower-left forward fuselage, whilst a 272kg-capable hoist is mounted on the upper- right fuselage. There is also an AN/AVS-9 equipped cockpit-integrated NVG system available to the crew. The aircraft is powered by two Pratt & Whitney PT6C-67C turbo-shaft engines, each with 1,530 SHP driven through a five-blade main rotor.

Plans are already in place to increase the size of the current AW.139 fleet, as the helo' provides a huge step-up in capability over the older AB.412. Exactly how many more will be taken on charge is unsure, but two AB.412s have already been withdrawn (aircraft 9-02 and 9-06) and are being cannibalised at Luni prior to being sold off. 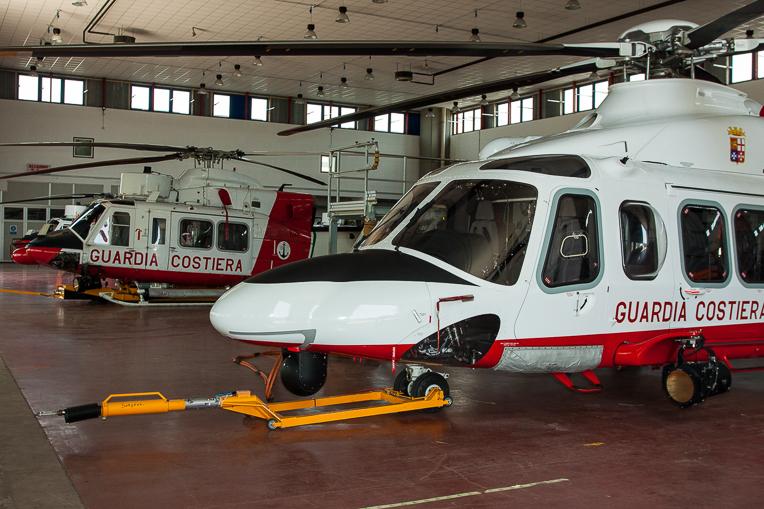 The 1st Section of the Italian Coast Guard Helicopter Flight (1º Sezione Elicotteri), based at Luni-Sarzana air base has been in operation since December 1991 and currently operates six Agusta-Bell AB.412CP and two Agusta-Westland AW.139 helicopters. Both types are employed primarily in the Search and Rescue (SAR) role, but other operations conducted by 1º Sezione Elicotteri include maritime policing, fisheries protection, pollution control, coastal surveillance and general transportation duties. The unit provides SAR cover on a 24/7 basis, 365 days a year and aircraft are programmed to be airborne within 30 minutes during daylight hours and within two hours for nightime operations. During the summer months the AB.412 is also used for fire-fighting duties using the 'Bambi Bucket System'. Although formed in late 1991, it was not until 13th April 1993 that the first AB.412SP helicopter (aircraft #MM81382/9-01) was taken on strength by the unit. July 2010 saw the arrival of the first AW.139 delivered to the Guardia Costiera (GC), and once again 1º Sezione Elicotteri at Luni was chosen as the unit to introduce the type to service. 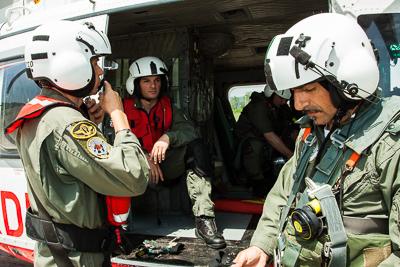 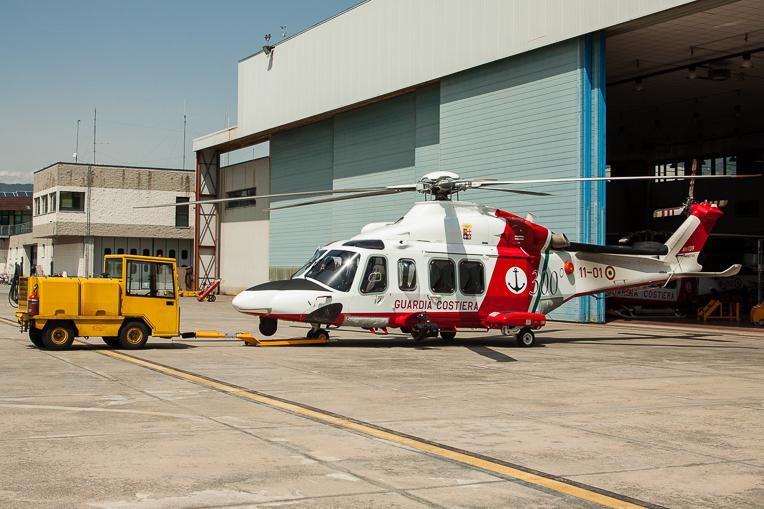 Alongside 1º Sezione at Luni is 1º Nucleo Aereo, which although having no aircraft of its own assigned performs a
large amount of the maintenance required to keep the Guardia Costiera's helicopter fleet airworthy
AB.412 #MM81511/9-09 awaits its turn with the engineers of 1º Nucleo Aereo 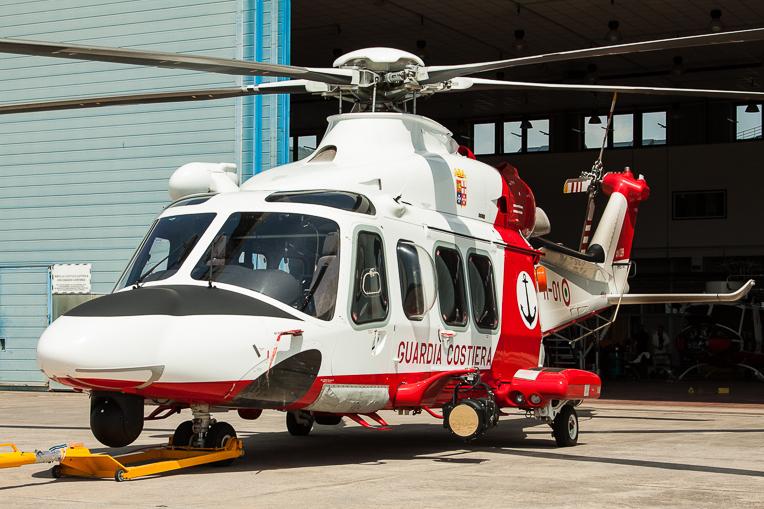 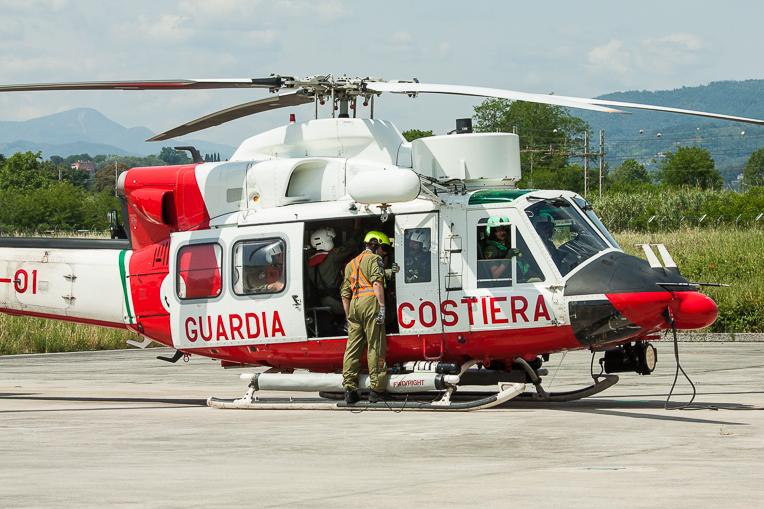 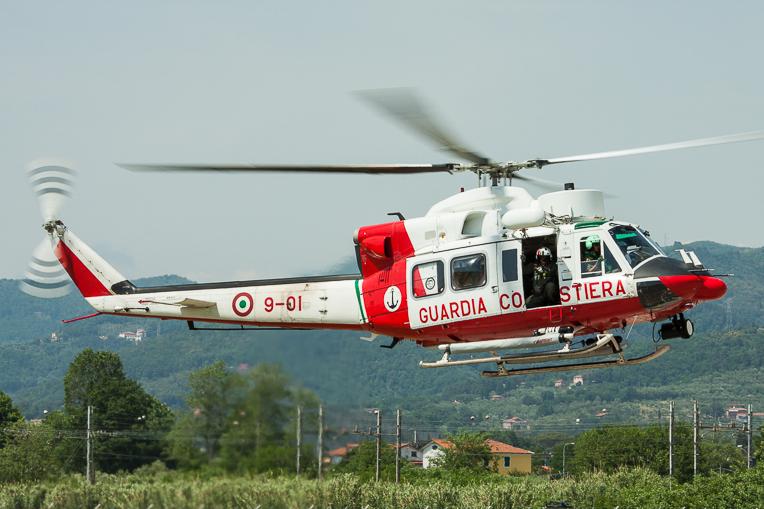 Having just been towed onto the ramp by the small tug, the crew start their pre-flight preparations

The sole AW.139 present during our visit is towed onto the ramp 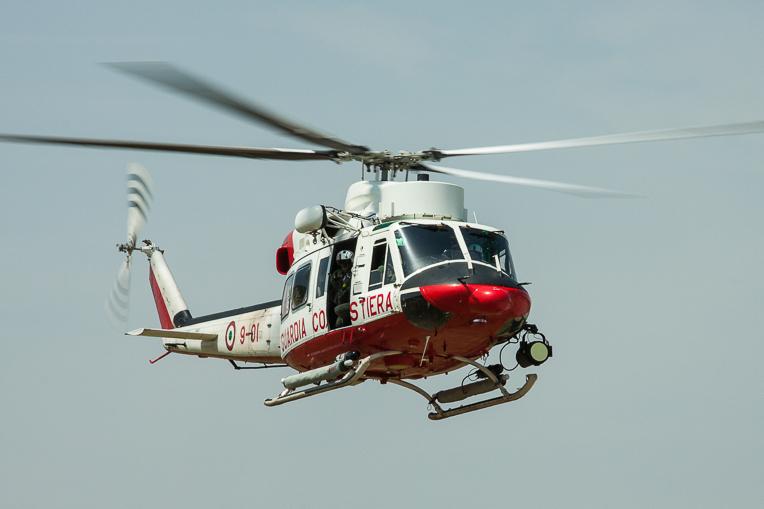 The AB.412s high-power searchlight can clearly be seen in the photograph above 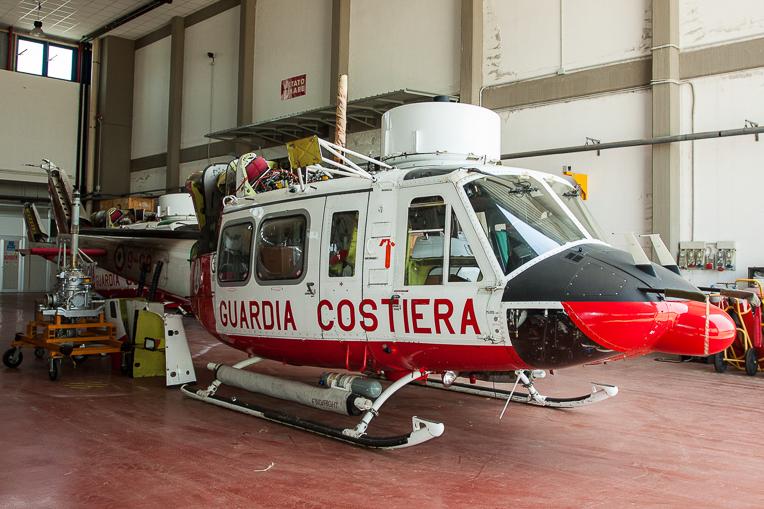 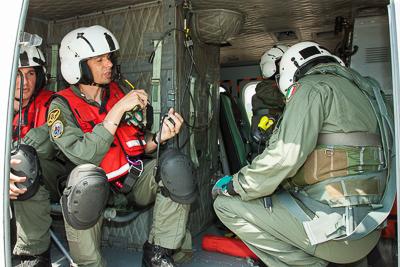 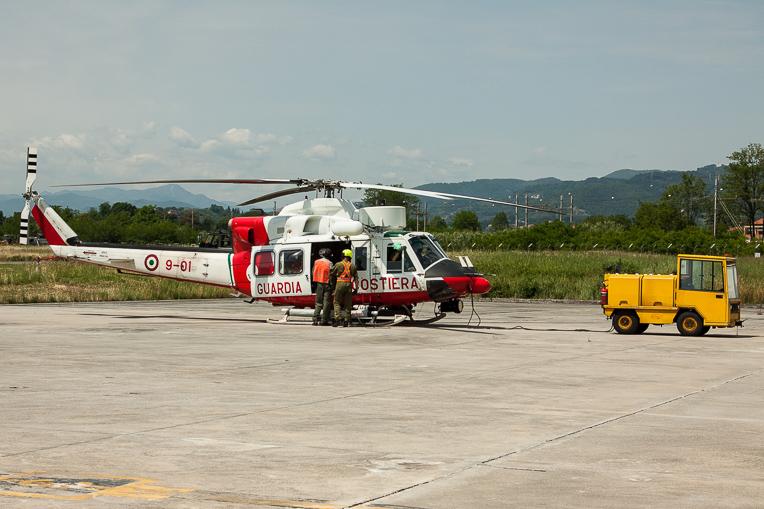 Prior to an afternoon training mission the rescue swimmers and hoist operator go through their final pre-flight preparation on-board an AB.412 'Koala' 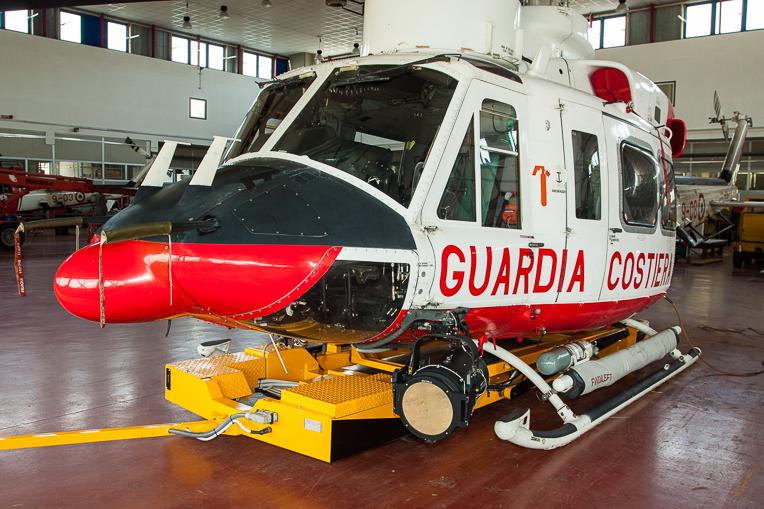 The Agusta-Bell AB.412 is a twin-engine helicopter powered by two Pratt & Whitney PT6T-6B turbines delivering a maximum 1,875 Shaft Horse-Power (SHP). The CP version operated by the Guardia Costiera is an upgrade of the original SP and HP versions taken on charge. The first four aircraft (known as the 'Koala' in GC service) delivered were the SP version, with the remaining six being of the High Performance (HP) variety. The main difference between the two models is that the HP is equipped with a re-inforced main rotor transmission, allowing a significant improvement in performance, particularly in hot & high conditions. A total of seven aircraft now remain in service from the ten originally delivered. One loss was suffered when MM81475/9-07 crashed on 17th October 2001 during a search & rescue training mission near Grosseto with the loss of four crewmen, whilst another two aircraft currently sit at Luni in storage.

As well as its SAR duties, 1º Sezione is also designated as the Centro Addestramento e Standardizzazione Equipaggi di Volo, or CASEV (Flight Crew Training and Standardisation Centre) for the helicopter component of the GC, and performs certification for all pilots destined for the AB.412 or type conversion for pilots moving to the AW.139. The operations zone of 1º Sezione extends from the French border at Ventimiglia to the south at Civitavecchia, near Rome. This operational limitation is primarily dictated by the flight endurance of the helicopters, this being approximately 2 hours 30 minutes for the AB.412, but the area of operations can of course be extended by the Centro Nazionale IMRCC in the event of national emergencies. From June to mid-September both the AB.412 and AW.139 fleets disperse on detachment to cover the increase in SAR requirements, as swimming and boating activity increases around the Italian coastline. The AW.139s deploying to Catania, Sicily with the AB.412s taking up residence at Cagliari, Napoli, Olbia and Trieste. 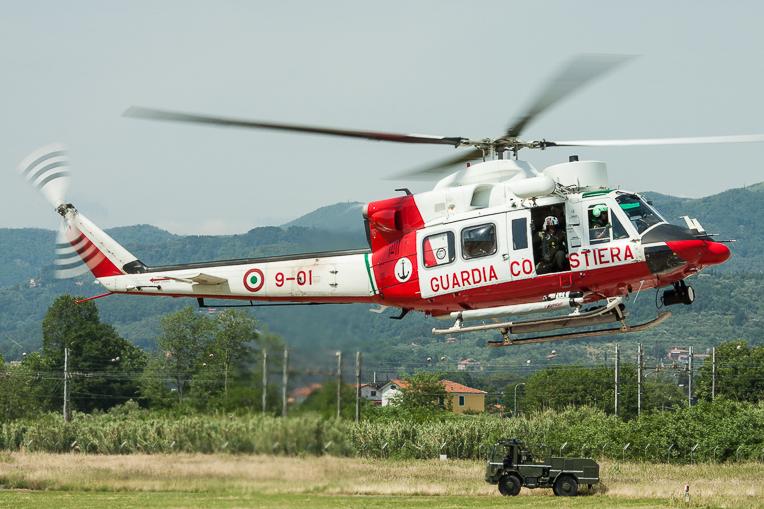 An AB.412 and AW.139 sit side by side in the Guardia Costeria's hangar at Luni

The state of the art cockpit of the AW.139

'Nemo' is the callsign used by the Coast Guard AW.139s