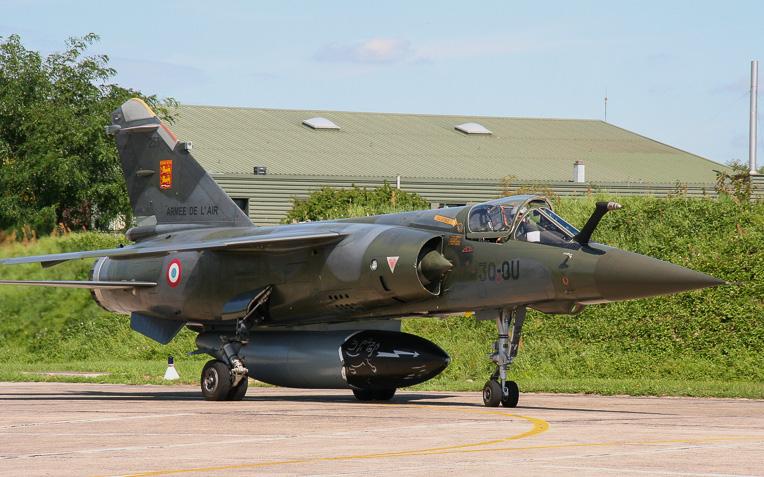 The initial 100 production units entered service with the FAF as the Mirage F.1C in 1973 with Escadron de Chasse 2/30 (EC 2/30) 'Normandie-Niemen' at Reims-Champagne (BA112) as an all-weather interceptor, equipped with the Thomson-CSF Cyrano IV mono-pulse radar. The F.1’s excellent characteristics saw later development of the Mirage F.1C-200 version featuring a fixed in-flight refuelling probe, which required an extension of the fuselage by 7 cm. The -200 version entered service in 1977. Further developments saw the F.1CR reconnaissance version and also the F.1CT which was adapted for the ground-attack role. 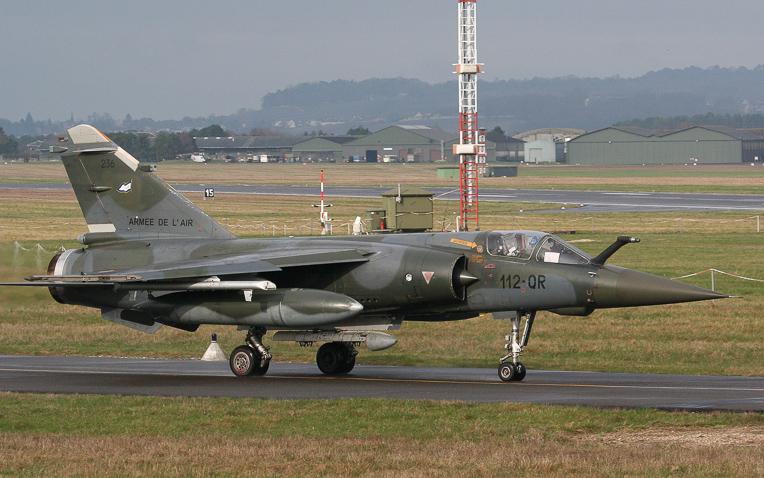 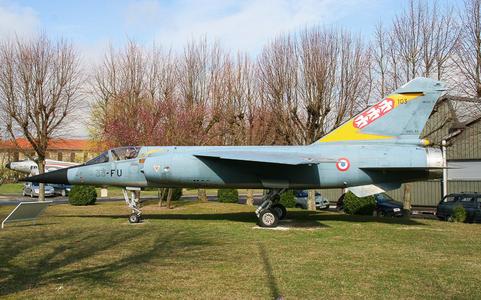 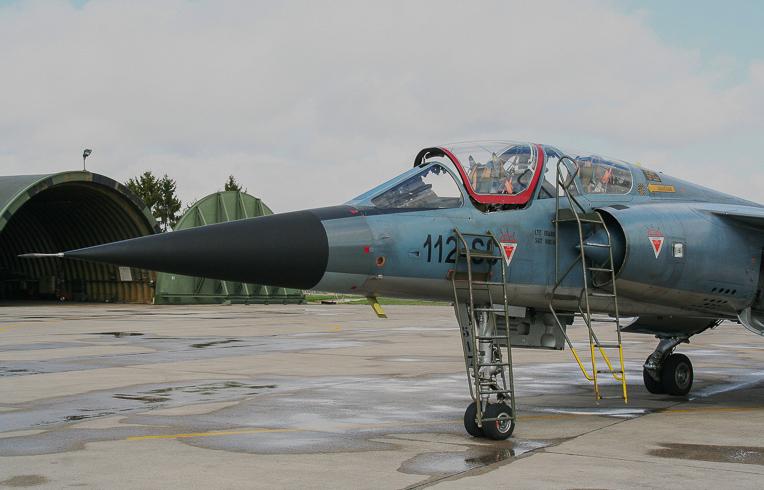 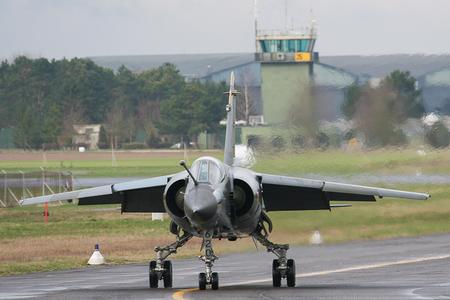 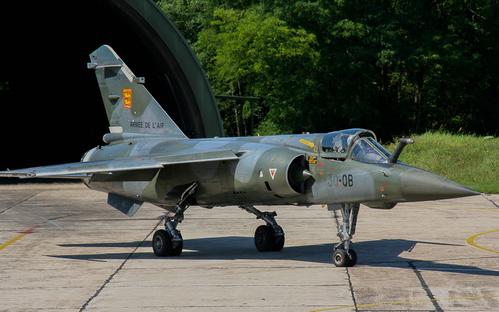 The F.1CTs were converted Mirage F.1CT-200 models and wore a similar two-tone grey/green camo' scheme as that adopted by the F.1CR fleet

A total of twenty two-seat F.1Bs were built for the French Air Force. The two-seat operational conversion trainers were delivered between October 1980 and March 1983. The additional seat added an extra 30 cm to the length of the fuselage, but at the cost of internal fuel capacity and the internal cannon.

No matter what angle you look at the Mirage F.1 it is without doubt a sexy looking fighter aircraft

The CT's ability to carry a variety of air-to-ground weapons, including rockets, cluster bombs and laser-guided bombs, whilst retaining the F.1Cs air-to-air capability made the F.1CT a far more capable aircraft than the two types it replaced in FAF service. Two prototypes were converted by Dassault, with a further 55 converted by the French Air Force at Clermont-Ferrand. The F.1CTs were initially based at Colmar-Meyenheim with 13 Escadron de Chasse and latterly with 30 Escadron de Chasse. 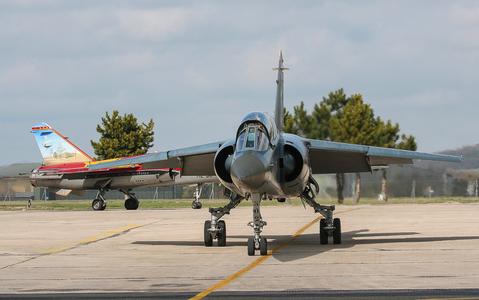 Side-Looking Airborne Radar (SLAR); ASTAC Electronic Intelligence (ELINT) pod and the RP35P optical reconnaissance pod. In all a total of 64 Mirage F.1CRs were ordered by the French Air Force and were finally withdrawn from service in 2014.

A Mirage F.1CT in the markings of EC 2/30 at Colmar is captured as it heads out from an afternoon mission from its home base at BA132 Colmar-Meyenheim in August 2008. By this date the withdrawal of the Mirage F.1 fleet was in full flow and BA132 would close just over two years later. As the F.1 fleet reduced in size squadrons and aircraft moved from base to base, with the squadrons often being re-numbered in the process (eg; On 1 July 2008 EC1/30 'Alsace' disbanded and EC2/30 'Normandie-Niemen' became EC1/30 'Normandie-Niemen') 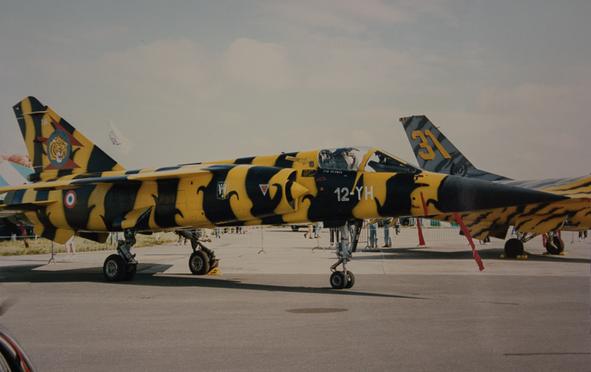 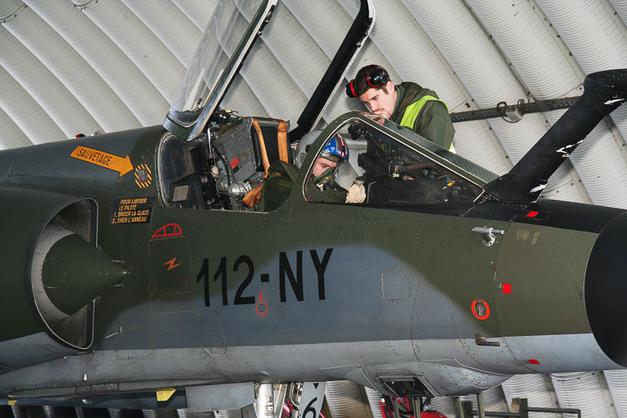 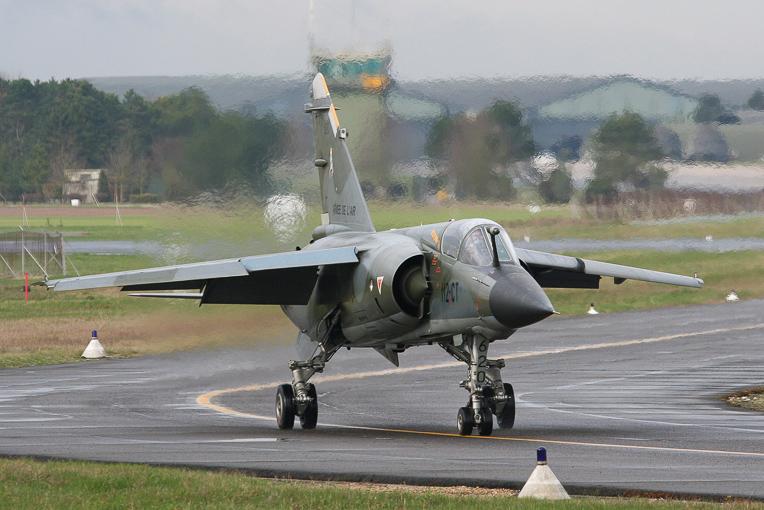 As mentioned previously, the Mirage F.1 participated in a number of FAF operations overseas - one being Operation Daguet - Mirage F.1CRs participating in both Desert Shield and Desert Storm over Kuwait and southern Iraq. Based at Al Ahsa air base, Saudi Arabia, the recce Mirages were often used as bombers alongside SEPECAT Jaguar aircraft, serving as 'pathfinders' utilising their more comprehensive navigation and attack equipment (Système de Navigation et d’Attaque et de Reconnaissance - SNAR).

During the operation, ten Mirage aircraft from Escadron de Reconnaissance 1/33, 2/33 and 3/33 based at Strasbourg-Entzheim flew 556 sorties and 995 hours. 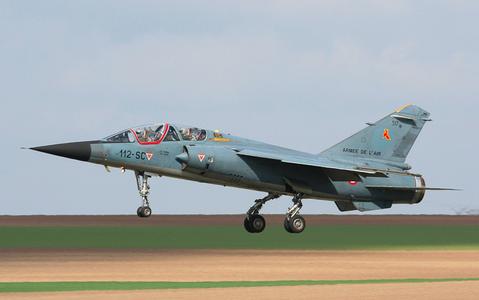 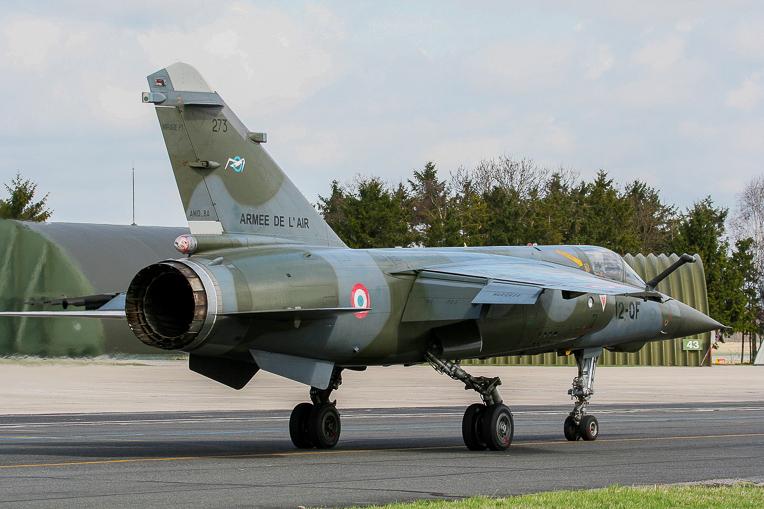 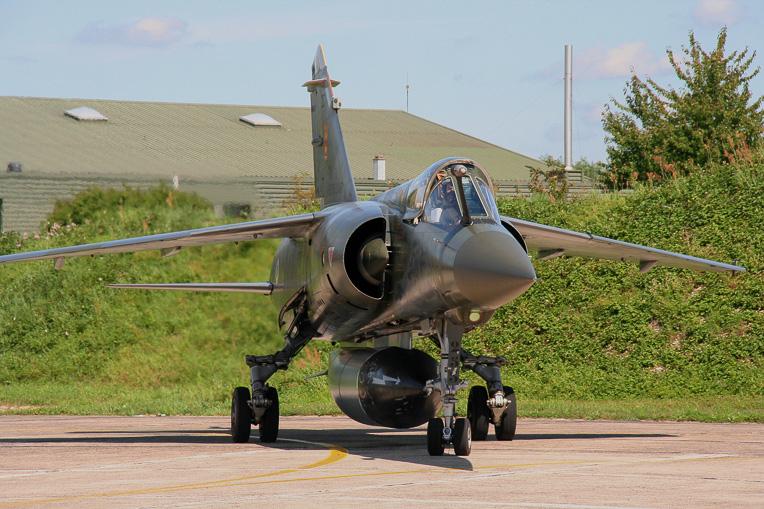 A twin-seat F.1B is captured taxying out at Reims for a morning mission 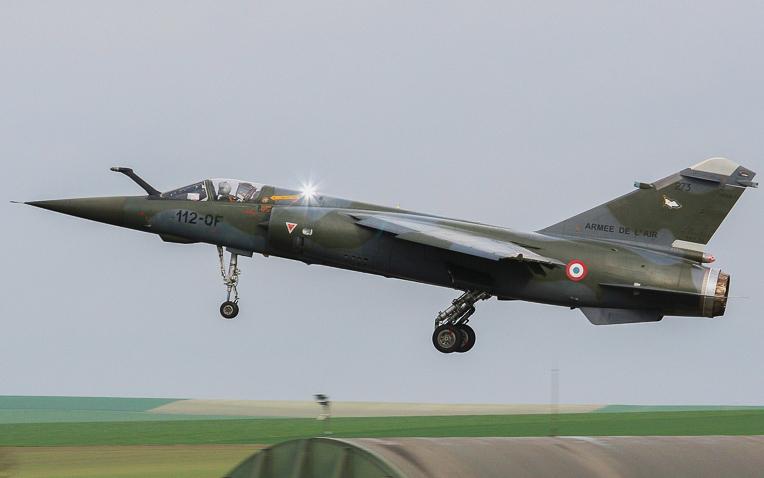 The Mirage F.1C was equipped with an Instrument Landing System (ILS), radar altimeter, UHF/VHF radio sets, Tactical Air Navigation system (TACAN) and a ground data-link. Powered by a single SNECMA Atar 9K-50 turbojet engine capable of providing 15,000lb of thrust, the F.1 has a maximum speed above Mach 2 and an altitude ceiling in excess of 60,000ft. Armament on the Mirage F.1 included a pair of internal DEFA-553 30mm cannons, and a single Matra R530 medium-range air-to-air missile – later replaced by the Matra Super 530F radar-guided missile, and later the R550 Magic. 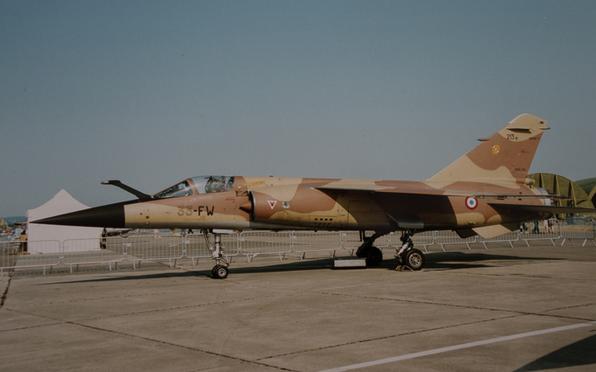 The Mirage F.1CR reconnaissance version first flew on 20 November 1981 and entered service with the Armée de l'Air in 1983, equipping 33 Reconnaissance Wing (33 Escadron de Reconnaissance) at Strasbourg-Entzheim (BA124). The F.1CR is equipped with a Thomson-TRT 40 panoramic camera or Thomson-TRT 33 vertical camera; a SAT SCM2400 Super Cyclone infrared line-scan unit in the space previously occupied by the port cannon; Cyrano IVM-R radar providing ground and contour-mapping modules. The recce Mirages like the F.1CT-200s had the benefit of an in-flight refuelling probe. Various additional sensors can be carried in external pods carried under the fuselage centre-line including; 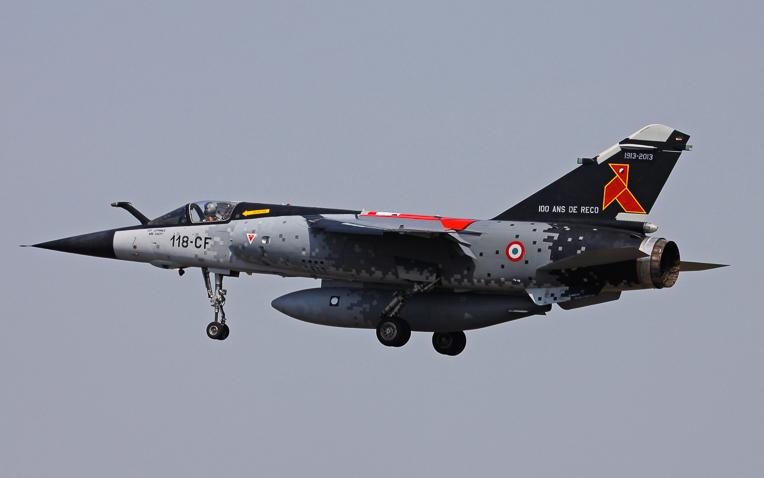 The last remaining Mirage F.1 squadron (ER 02/033) moved to Mont-de-Marsan in 2011, flying a mixed fleet of F.1Bs, F.1CRs and F.1CTs. The F.1CTs were retired in October 2012, leaving the F.1Bs and recce birds to soldier on until the end. The story of this much-loved fighter 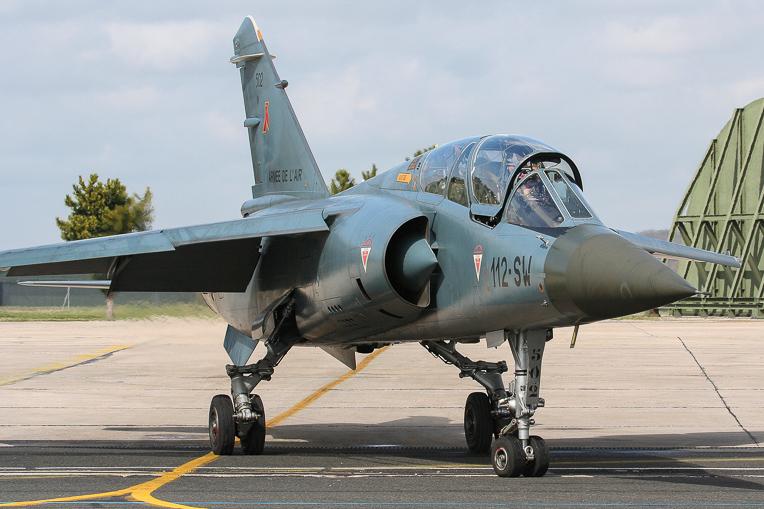 The aircraft is a veteran of 'Operation Daguet', the Armée de l'Air involvement in the first Gulf War 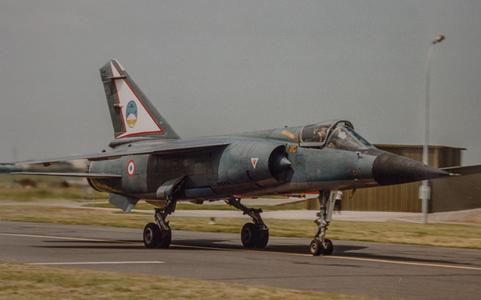 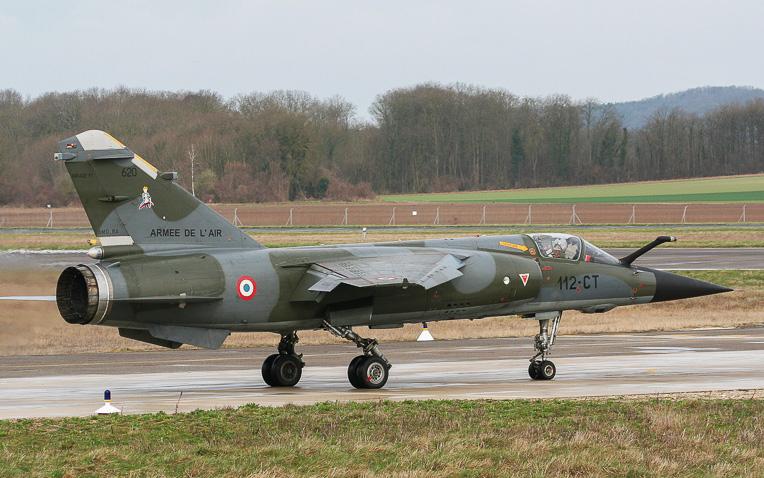 With Colmar having closed in June 2010, the Mirage F.1 fleet was operating out of Reims-Champagne, where #273 (left) is seen as it taxy's out for a mission. The aircraft is currently stored at Chateadun 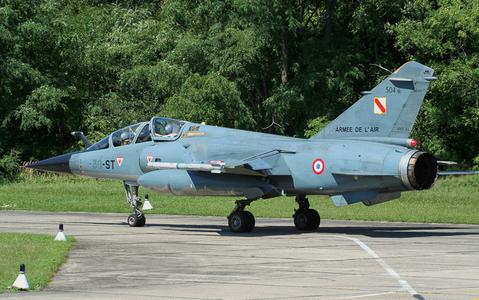 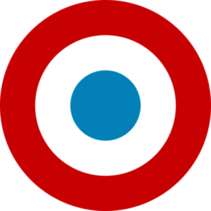 The Dassault Mirage F.1 served with the French Air Force (FAF - Armée de l'Air) for over 40 years as an interceptor, ground-attack and reconnaissance aircraft. Developed as a replacement to the successful delta-wing Mirage III, the F.1 provided many years of sterling service to the FAF, conducting numerous overseas operations during its lifetime. We take a look back at this historic aircraft’s service with the Armée de l'Air. 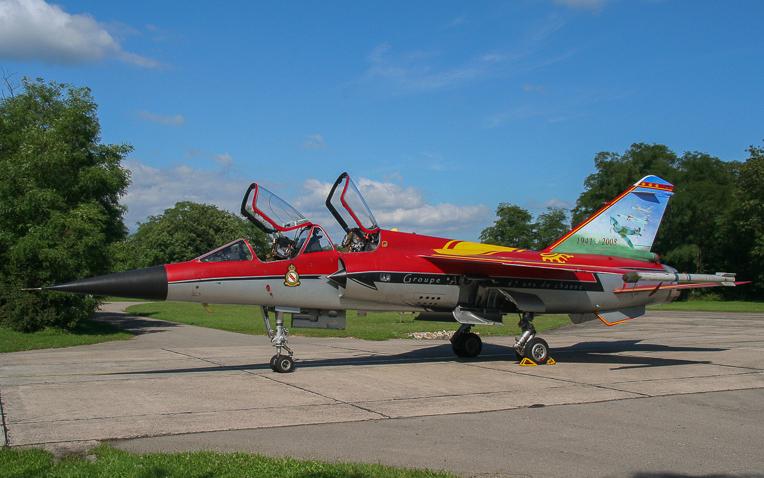 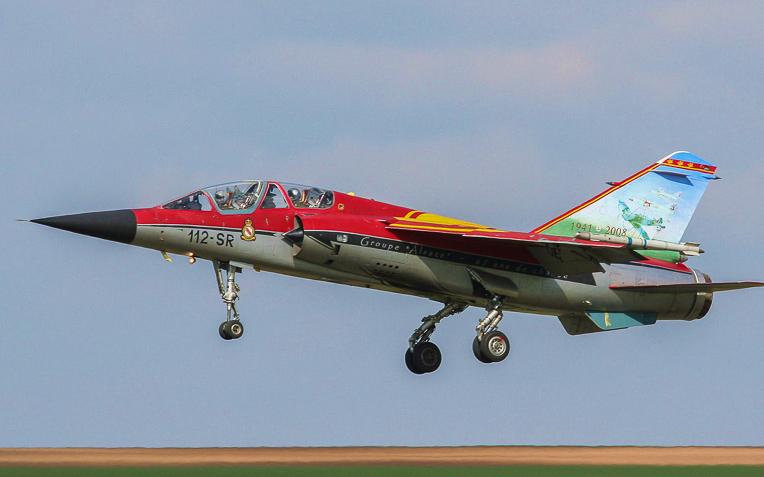 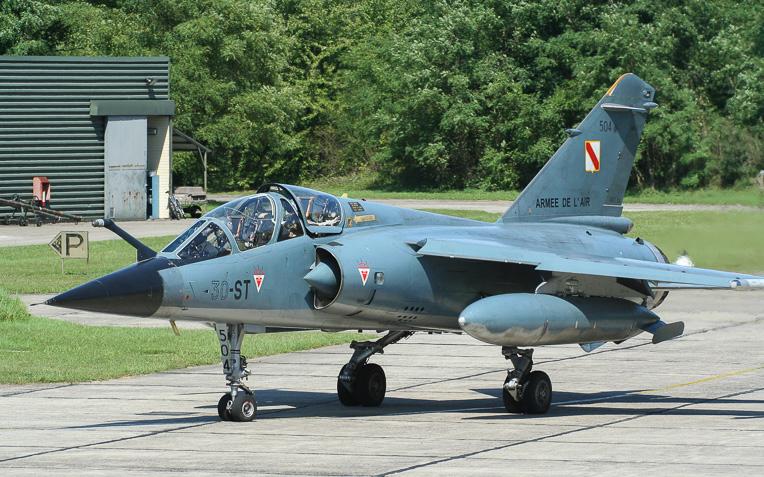 Mirage F.1B #502/112-SW was photographed at its home base of Reims-Champagne 29 March 2010. The aircraft is wearing the standard blue/grey colour scheme that was adopted by the F.1B and F.1C fleet throughout its career with the Armée de l'Air. Of note is that by this time the FAF had adopted a code scheme applicable to the air base (in this case BA112) and not to the wing that owned the aircraft.

Escadron de Chasse 1/12 'Cambrésis' was one of the founding members of the NATO Tiger Association. Sadly the squadron disbanded 30 April 30 2012, but the French Air Force recognized the importance of the NATO Tiger Association and so to keep the traditions alive SPA 162, the Flight that was originally invited to join the Tigers, was kept alive. SPA 162 found a new home in BA113 Saint-Dizier flying the Dassault Rafale with EC 1/7 'Provence'. This beautifully tiger-striped Mirage F.1C was painted for the 1991 Tiger Meet held at RAF Fairford, UK. 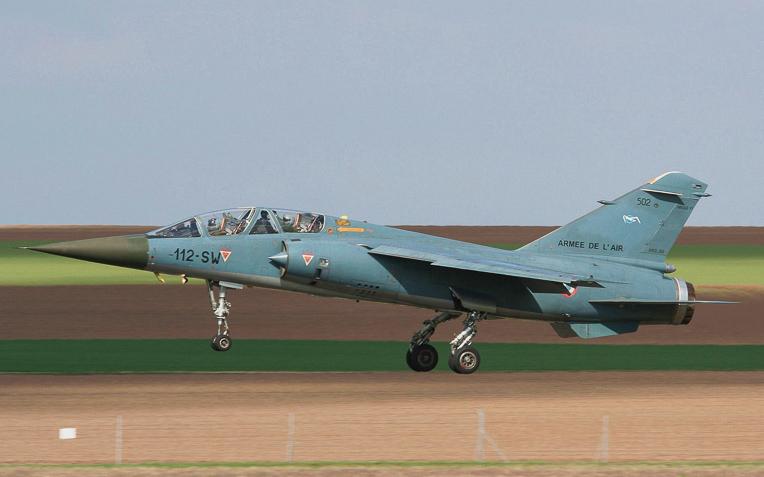 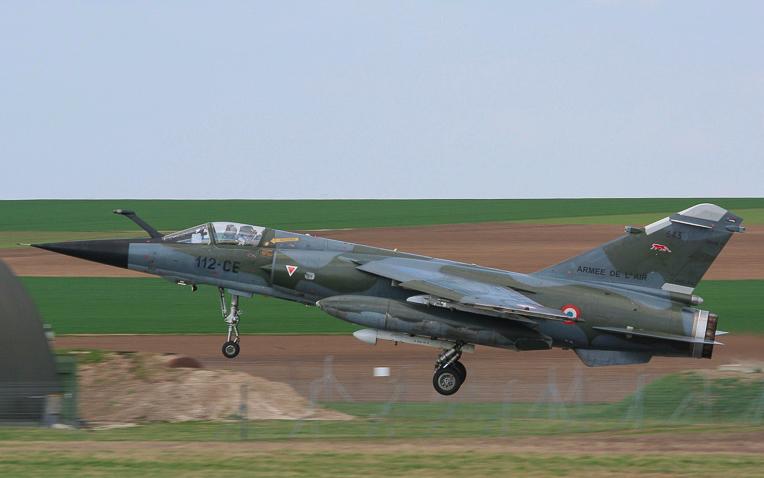 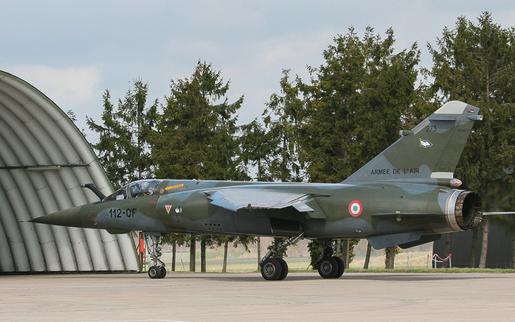 The single-seat Mirage F.1C provided sterling service with the French Air Force for some 30 years, continuing alongside the advanced Mirage 2000C in the interceptor role. The F.1C was eventually retired from service with the French Air Force in June 2003. With the F.1CR and F.1CT continuing on, the two-seat F.1B maintained its role as a conversion trainer until withdrawal of the remainder of the fleet in July 2014.

In the early 1960s Dassault had been working on a couple of design programmes to meet the future needs of the French Air Force. In conjunction with these developments, they had also been privately funding a fighter programme of their own - the Mirage F1. In 1964 the French government awarded Dassault Aviation a development contract to commence work on an all-weather interceptor - designed as a replacement for the Mirage III and so the Mirage F.1 entered production. The F.1 provided significant performance improvements over its predecessor with more power, more internal fuel, improved manoeuvrability, better field performance and improved radar.

aircraft finally came to an end two years later when the last four flying aircraft made their final appearance 14 July 2014 at the annual Bastille Day flypast over Paris.

Having been superseded by the Mirage 2000 in the air defence role, a number of surplus Mirage F.1C-200s were converted to the ground-attack F.1CT version in 1988 to replace the elderly fleet of Mirage IIIEs and Mirage Vs. The Mirage F.1CT programme brought the avionics of the F.1C up to the standard of the F.1CR, with the additional air-to-ground modes of the Cyrano IVM-R, an improved navigation/attack system, and a laser range-finder fitted under the nose. New Martin-Baker Mk.10 zero-zero ejection seats were installed, improved radar detection and warning devices, chaff/flare dispensers, and secure radios were also added.

Without doubt the nicest commemorative scheme applied to a Mirage F.1 was that on #518. The aircraft is seen here at its home base of Colmar-Meyenheim 25 August 2008. The Mirage F.1B was painted to commemorate 67 years of Groupe de Chasse 01/030 'Alsace'.