Usng the callsigns Ascot 9401 and Ascot 9402, they provided in-flight refuelling for the F-35 Lightnings 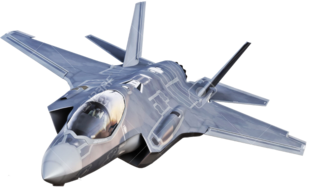 We would like to thank the following people for their assistance in completing this article:- 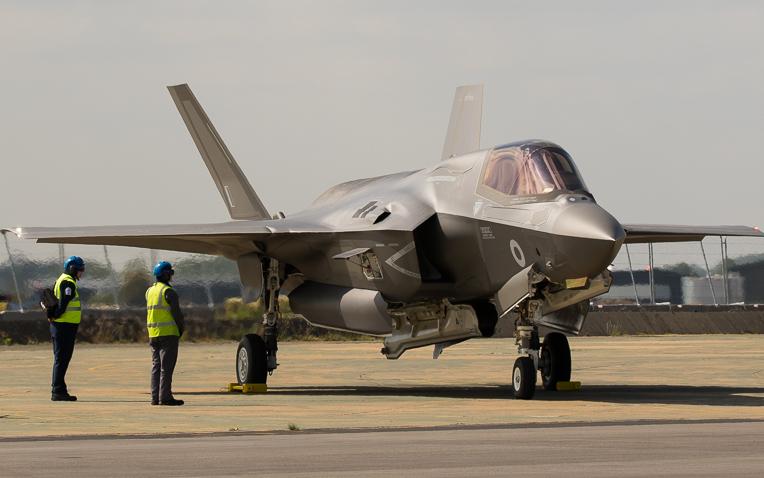 Manufactured in the USA, the 5th-Generation F-35B is the STOVL (Short Take-Off, Vertical Landing) version of Lockheed Martin's multi-role stealth aircraft. Developed as the Joint Strike Fighter (JSF), the multi-role F-35B Lightning operates alongside the RAF's British Aerospace (BAe) Typhoons; capable of conducting air-to-air, air-to-surface, electronic warfare and intelligence gathering missions simultaneously. Combining advanced sensors and mission systems with low-observable technology (stealth), it is able to operate undetected in hostile environments. With its integrated sensors and data-link capability, the F-35 gives its pilot unprecedented situational awareness, enabling it to share information with other aircraft via secure communications. The 2015 Strategic Defence Review (SDSR) confirmed the intention to order 138 aircraft for the RAF/RN, with the first frontline aircraft arriving at RAF Marham in June 2018. Nine F-35s are currently on strength with 617 Squadron, with additional deliveries due later this year.

Note the large open door behind the cockpit, the inlet for the aircraft's Rolls-Royce 'lift system'

She is captured here departing Runway 24 for RAF Akrotiri 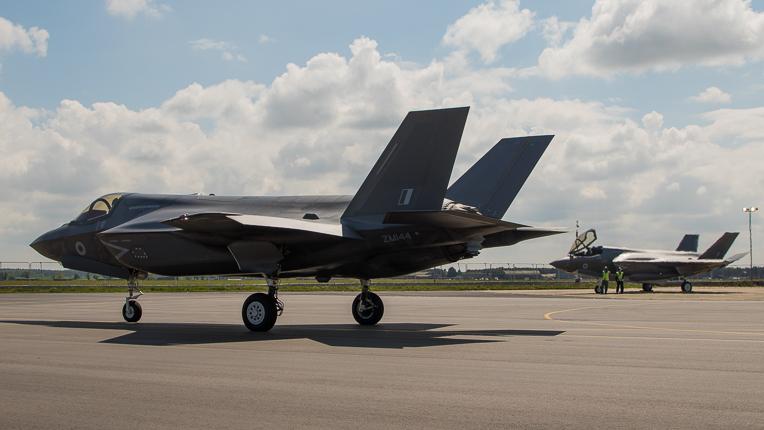 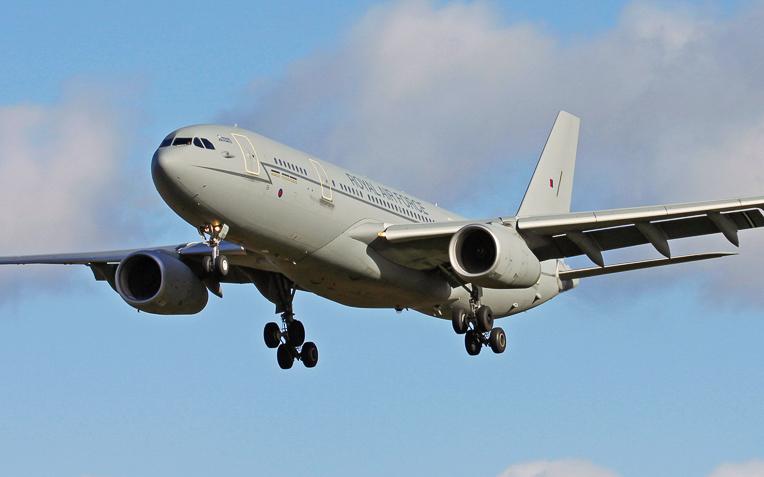 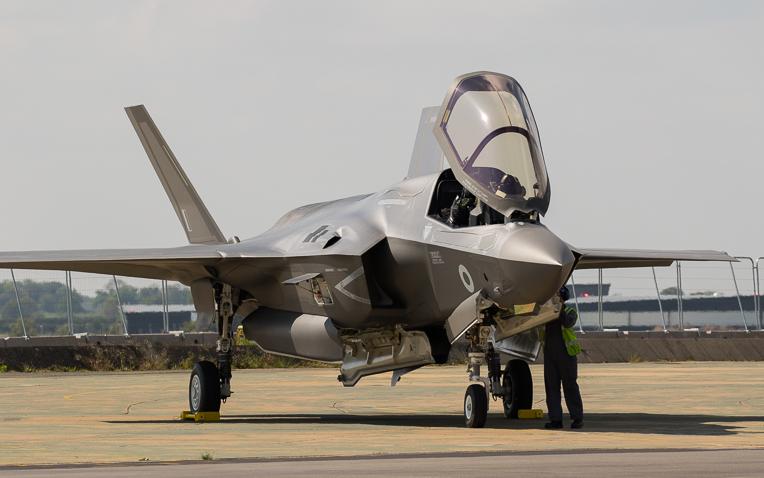 Three of the F-35s await the call at RAF Marham

The first wave of aircraft departed shortly after 11am local time 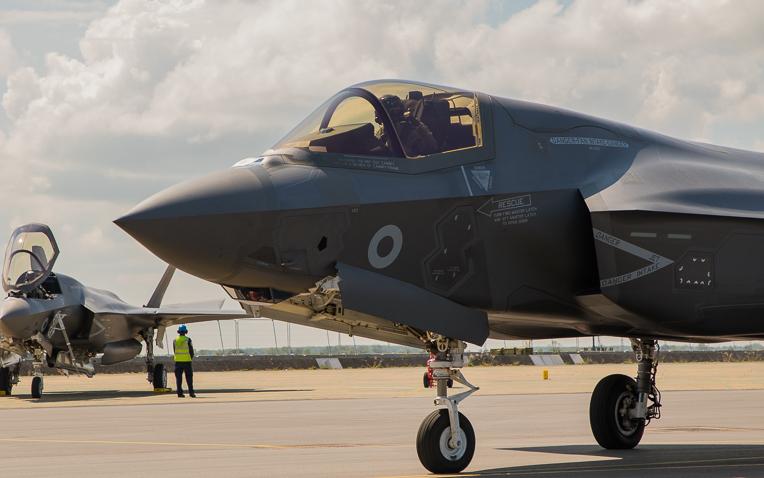 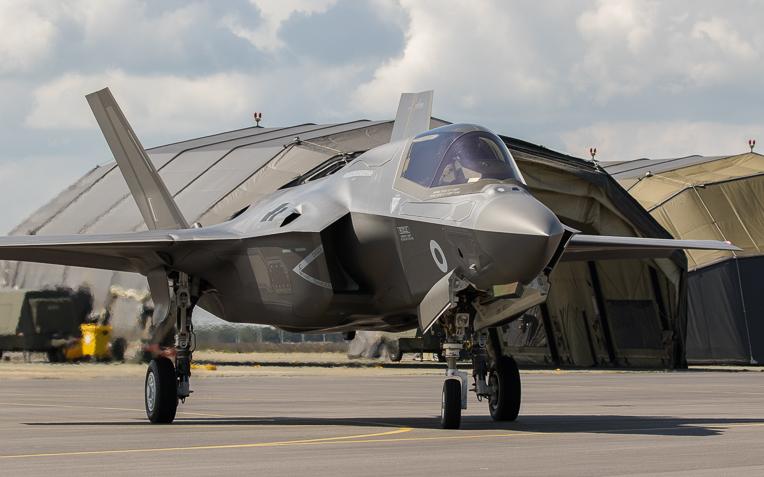 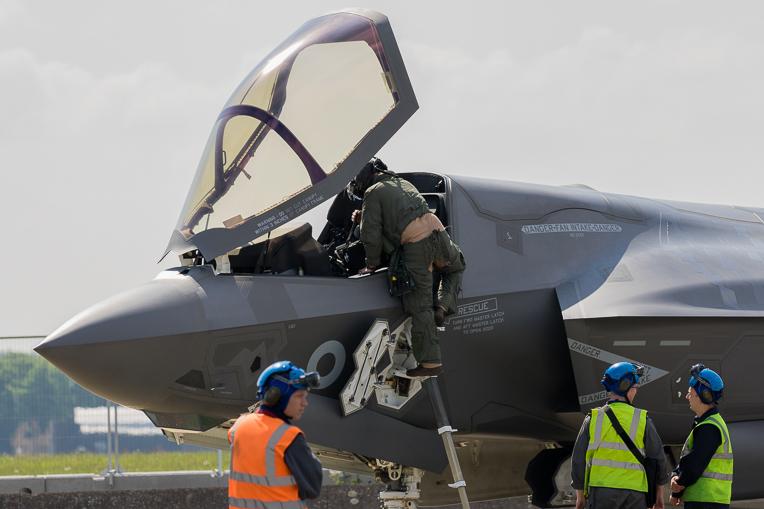 Having achieved Initial Operating Capability (IOC) in January this year, Lightning Dawn sees the F-35 deploy to Cyprus for the first time – conducting routine training sorties together with regional allies. Confirming that there are no plans to participate in Operation Shader (the U.K’s mission against ISIL), Gp. Capt. Townsend told us; “We describe this period as ‘Deepening IOC’ – we’ve learned a lot of lessons along the way. The air system is all about information and mission data. We’ve made enormous steps forward in our understanding of F-35. Marham has been tailor-made to support F-35 for a couple of years now”. Looking on enviously as the six jets departed, and with a huge smile on his face, he went said; “I love aeroplanes, this aeroplane is special. She is more than an aeroplane, she is an air system. There’s so much more to F-35 - every single pilot says it is absolutely extraordinary in what it can do. I would love to get in it and fly it, unfortunately I can’t”.

Upon arrival in Cyprus, RAF Akrotiri Station Commander, Group Captain Christopher Snaith, released the following media statement; "It is a privilege to welcome 617 Squadron and the F-35B Lightning aircraft to RAF Akrotiri. This is the first overseas training deployment of the aircraft and marks another key milestone for the aircraft in UK service. Akrotiri has been home for British Forces personnel for nearly 70 years; we are hugely grateful for the support and hospitality from the people of Cyprus and I know that all those involved in the F-35 programme, both Royal Navy and Royal Air Force, are delighted to be here. What is important now is to maximise the opportunities that being in Cyprus presents and ensure we learn the lessons from what I know will be an incredibly successful deployment".

Supported by two Airbus A330 Voyager aircraft from RAF Brize Norton’s 10 & 101 Squadrons, the Lightnings flew non-stop to Cyprus. Following departure of the last F-35 to Cyprus, Group Captain Townsend informed us that six further F-35B Lightning aircraft are due to arrive at RAF Marham very soon, at which point 207 Squadron will re-form as the Operational Conversion Unit (OCU) for the F-35 fleet – with plans to fly their first sorties sometime in September. He also confirmed that frontline RAF F-35s will participate in Westlant 19 aboard HMS Queen Elizabeth later this year. The Westlant 19 deployment will focus on operations, rather than the basics of flying the F-35 on and off the carrier’s flight-deck, whilst also working as part of a carrier task group.

The commencement of Exercise Lightning Dawn saw six Lockheed Martin F-35B aircraft depart RAF Marham 21st May for the U.K aircraft's first overseas deployment to RAF Akrotiri, Cyprus. Watched by RAF Marham’s Station Commander, Group Captain Ian ‘Cab’ Townsend, the six Lightnings departed just after 11am local time in two waves of three. “It’s fantastic to see them getting airborne – they have a five hour flight with three different refuels mid-air” he said. “The whole squadron is going; it reaches across the whole of RAF Marham”.

The deployment by 617 Squadron will test the sustainment of the F-35 Lightning Force away from its home base at RAF Marham, enhancing its preparedness for the first operational carrier deployment. Gp. Capt. Townsend said; “Everything we’re doing today also de-risks future deployments, what’s coming up in our future deployment in the autumn to HMS Queen Elizabeth – building our capability slowly, but surely”. 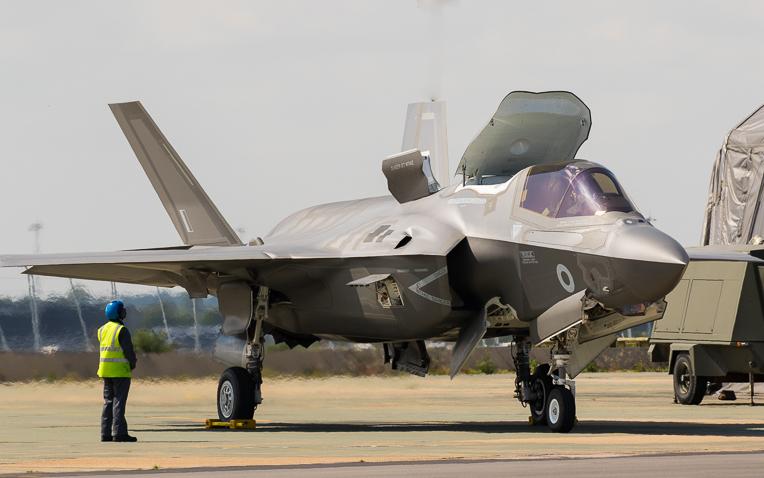 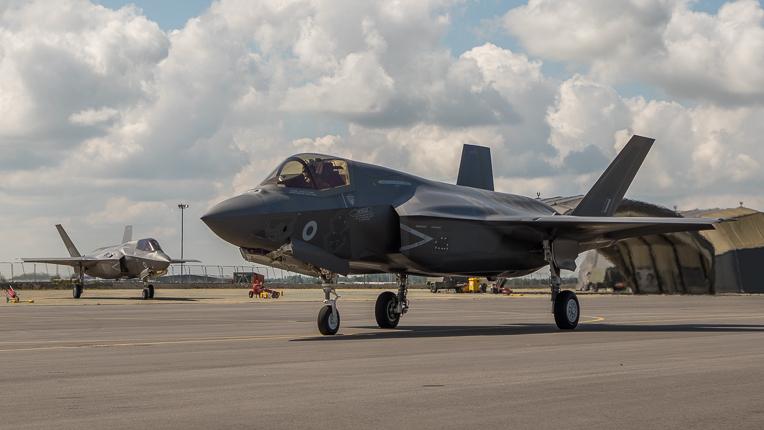 One of the six aircraft readies itself, watched closely by Royal Navy personnel 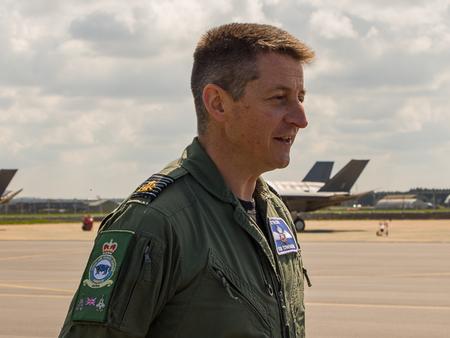 Following the announcement of a deployment to RAF Akrotiri back in April, the Royal Air Force’s new F-35B Lightning fighter left its home base for Cyprus 21st May to take part in its first overseas exercise. Just over 76 years ago, 617 Squadron formed to conduct ground-breaking operations and have once again been called upon to take a capability forwards for the first time.  The exercise in Cyprus will prove the aircraft's ability to operate away from RAF Marham and allow lessons to be learnt in operating the aircraft whilst on deployment.

It reflects a tremendously collegiate effort from the RAF, Royal Navy and Industry partners to focus on ensuring the deployment is as successful as the preparation phase. The training exercise will allow personnel from both services to gain vital experience in maintaining and flying the aircraft in an unfamiliar environment. The training exercise will also examine all aspects of moving the aircraft to a new location, including logistics, maintenance and sustainment of all the equipment and crew that comes with this impressive aircraft. 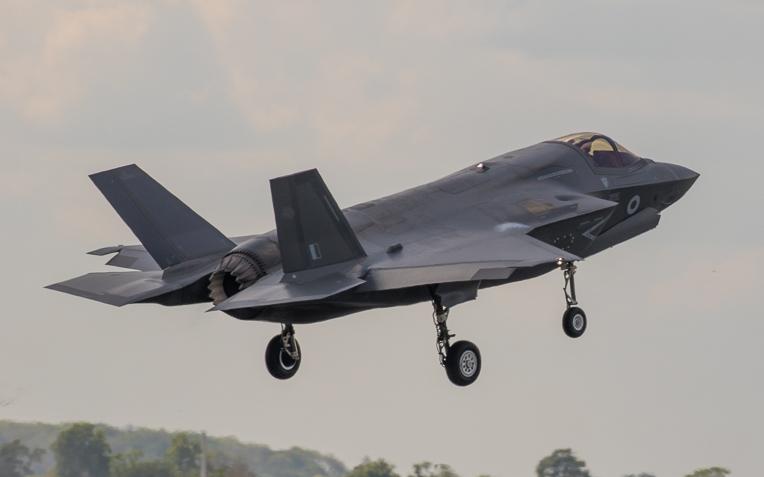 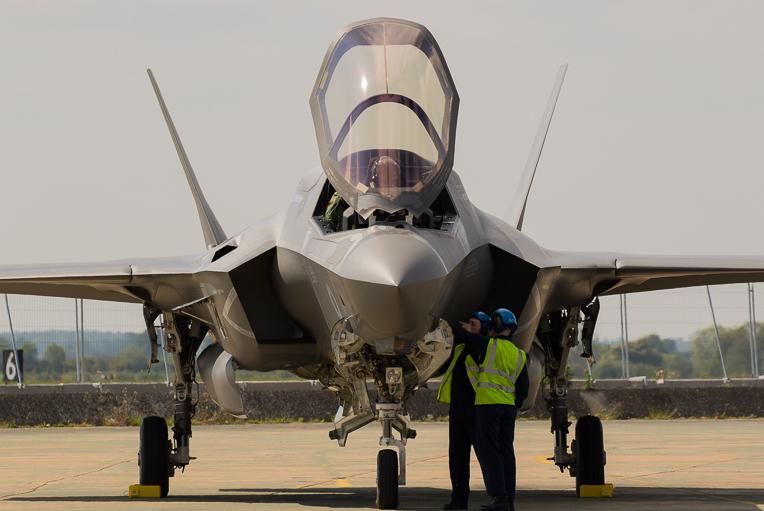 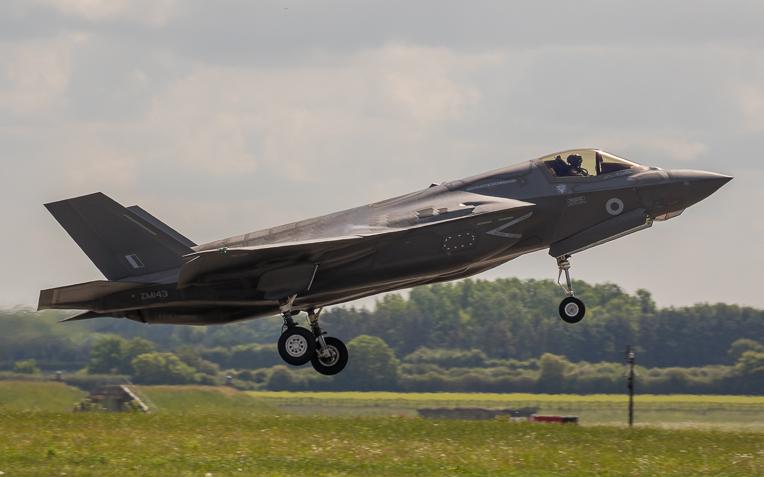 Note the rubberised portable shelters behind the aircraft

The F-35s were all flown by crews from 617 Squadron 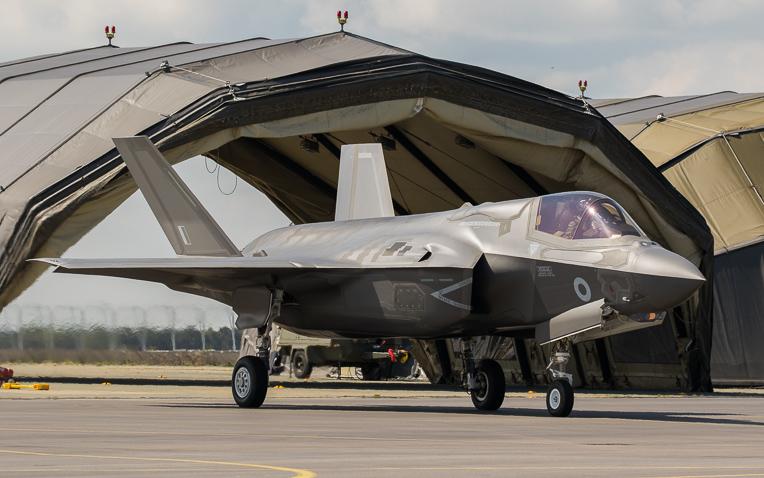