“This FTD will help to sharpen the Buzzard’s readiness and combat capability,” said U.S. Air Force Lt. Col. Daniel Lindsey, 510th FS commander. “Opportunities such as this allow us to exercise our deployment capabilities, equipment moves and setups, operations from different locations, and coordination with our NATO partners.” 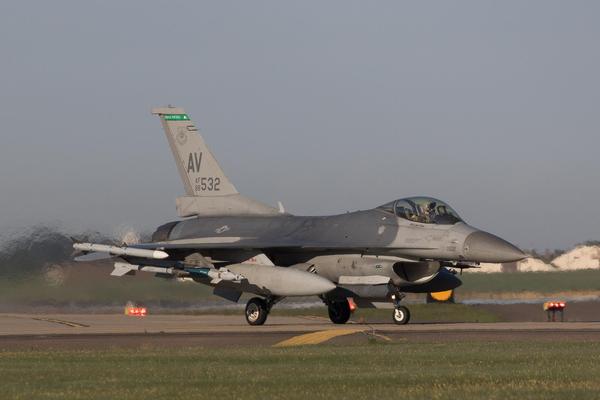 The aircraft is armed with pairs of AIM-120 AMRAAMs on the wing-tip pylons, AIM-9 Sidewinders on the outer-wing pylons, and GBU-12 Paveway laser-guided bombs 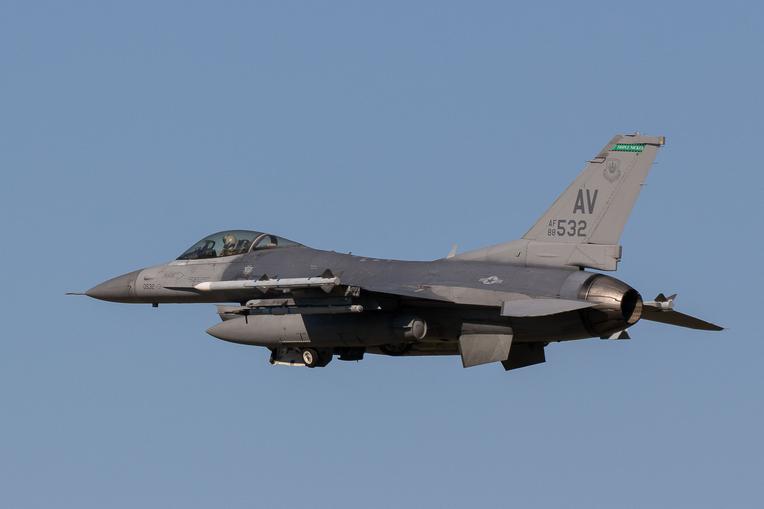 In recent years, the introduction of fifth generation aircraft such as the F-35 has seen Point Blank move up a step, the importance of integrating fourth and fifth-generation aircraft capabilities being paramount, as within the European theatre, the RAF, USAF and its NATO allies and partner nations are introducing the F-35 at pace.
With large exercises between the NATO allies enabling them  to share tactics, training, and procedures, co-ordinating the number of aircraft participating in an exercise such as Point Blank involves a lot of ground support staff - maintaining aircraft, providing air traffic control, and managing the battle-space within the designated training area. 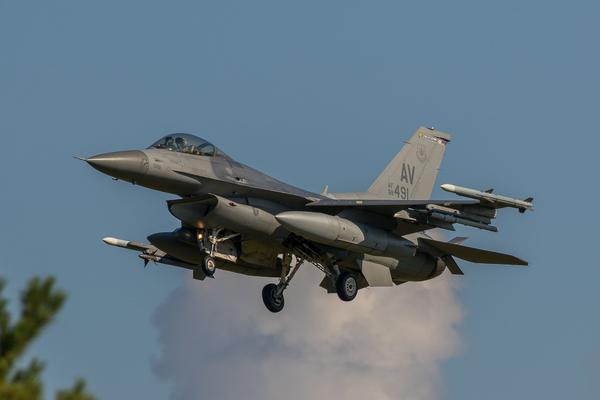 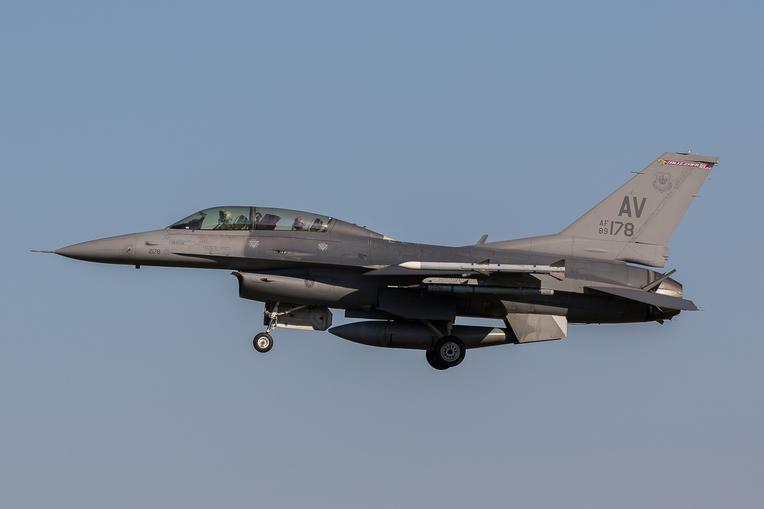 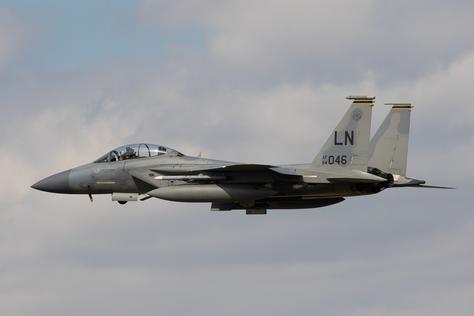 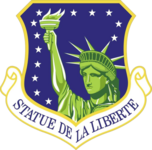 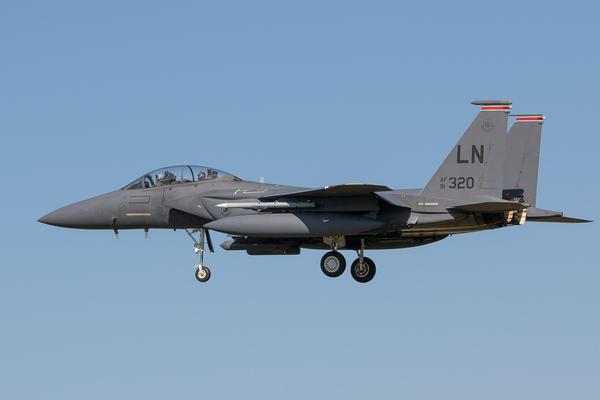 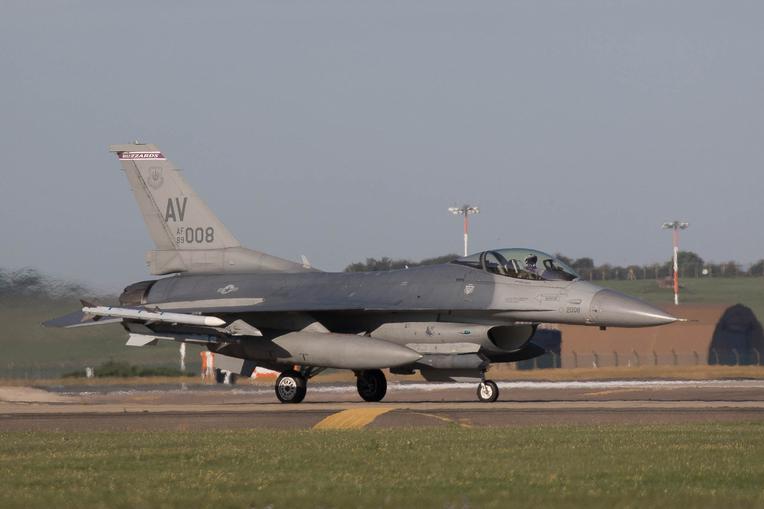 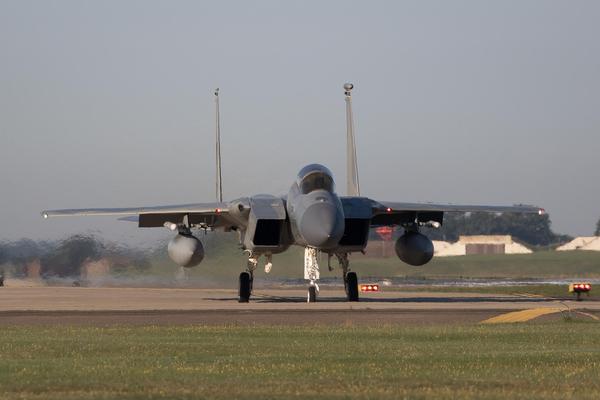 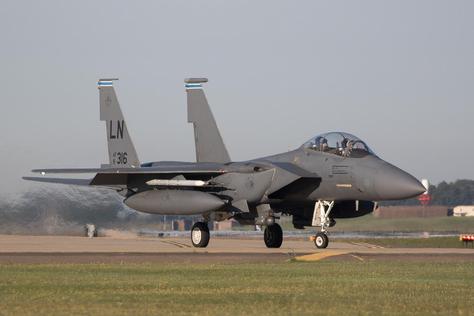 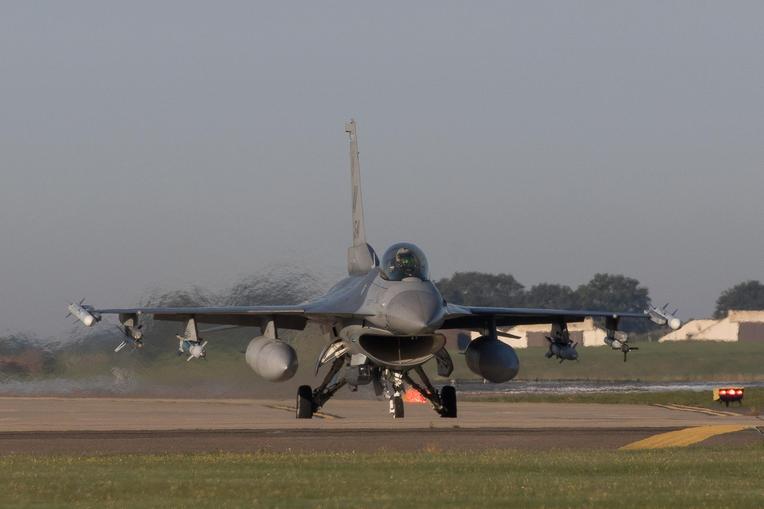 During the numerous iterations of Point Blank, scenarios have included Combat Search and Rescue (CSAR), Suppression of Enemy Air Defences (SEAD), Defensive Counter Air (DCA) and Reactive CSAR to name but a few.

“For the 31st Fighter Wing, this is an excellent opportunity to participate in a Large Force Exercise within USAFE; allowing our warfighters the opportunity to practice fighting a near-peer adversary,” said Maj. John Hamilton from the 555th Fighter Squadron. “It allows us to train alongside some of our NATO partners and boost our interoperability with a variety of airframes. We’ll be training alongside our wingmen and partners from the Royal Air Force, the Royal Netherlands Air Force, US Marines as well as other US Air Force units. It will be an excellent opportunity to integrate with other aircraft, including the F-35.” 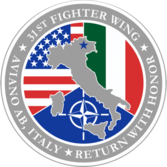 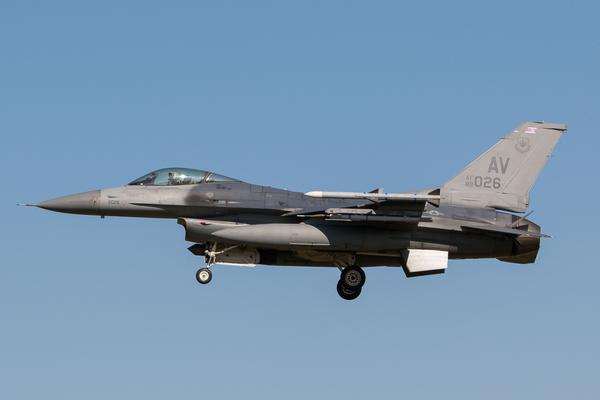 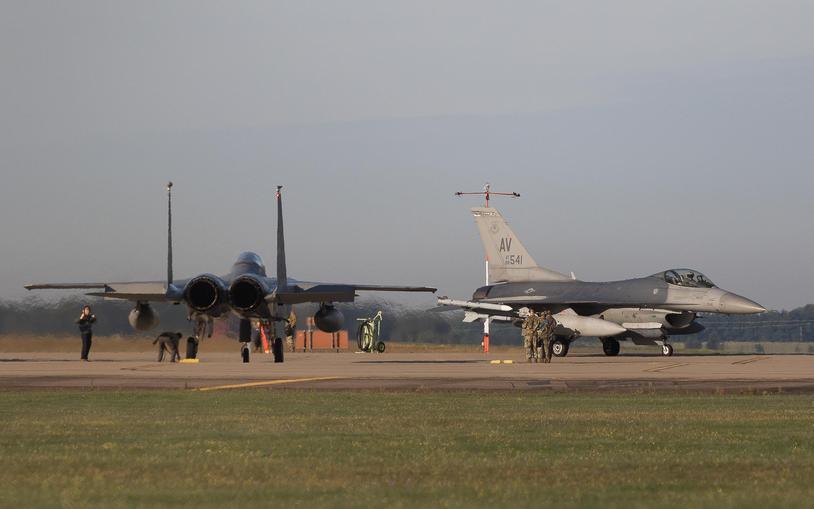 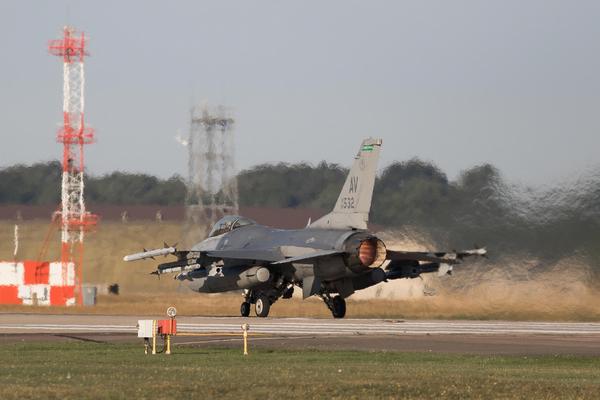 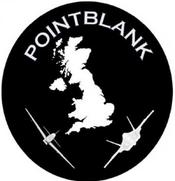 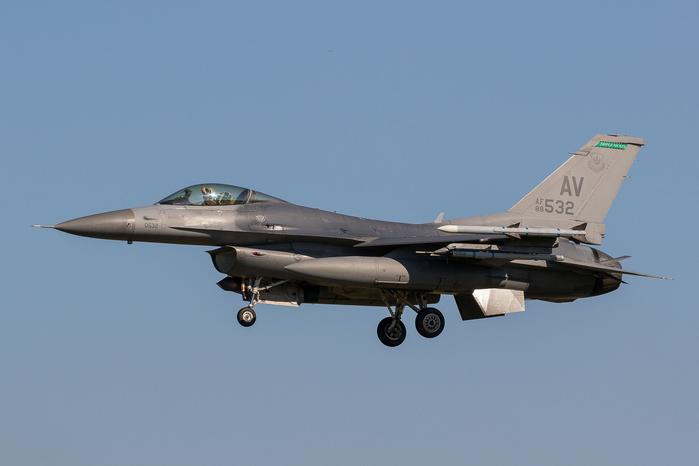 The first Block 40 Viper was rolled out of the Fort Worth facility in December 1988. Also sometimes known as the ‘Night Falcon’ because of its enhanced night/all-weather capabilities, it was unofficially designated F-16CG/DG by the USAF.
The Block 40/42 version of the F-16 saw the introduction of the LANTIRN (Low-Altitude Navigation and Targeting Infra-Red for Night) navigation and targeting pods, and the associated

During the deployment to RAF Lakenheath, the 31FW participated in Exercise Point Blank 20-4, a recurring, high-end exercise focused on fourth and fifth generation Defensive Counter Air integration. This iteration saw the return of USAF F-15s and RNLAF F-16s, alongside RAF and RNLAF F-35 Lightnings, RAF Typhoons, USAF KC-135s, and a RAF Voyager. 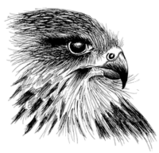 Point Blank is a quarterly exercise held by the Royal Air Force and the 48th Fighter Wing, part of United States Air Forces in Europe. The exercise is now in its fifth year, having been running since 2016. One of its goals is to maintain a high state of readiness, and to improve interoperability between the RAF and US Air Force. During the deployment to Lakenheath, the 31st FW F-16s conducted operations with the 48th FW F-15s. 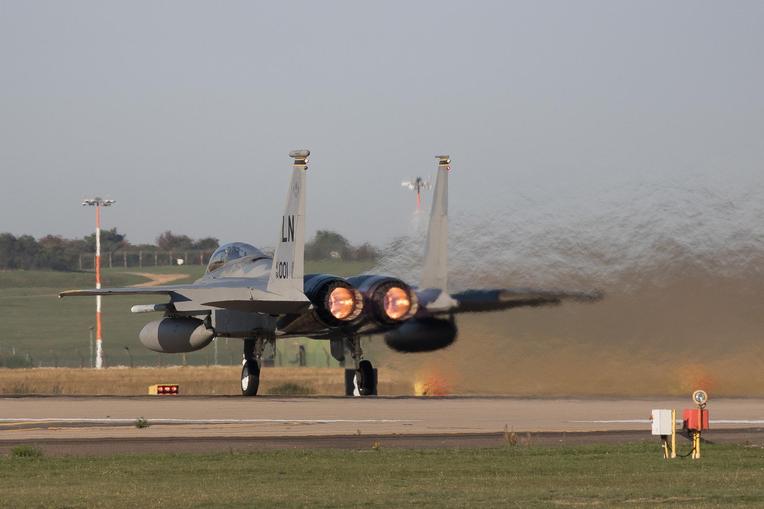 The aircraft belongs to the resident 493rd Fighter Squadron

since the onset of COVID-19, and in addition to the 16 F-16 Fighting Falcons, 200 Airmen from the 510th also participated in the bilateral training event to enhance interoperability, maintain joint readiness and strengthen relationships with regional allies and partners. 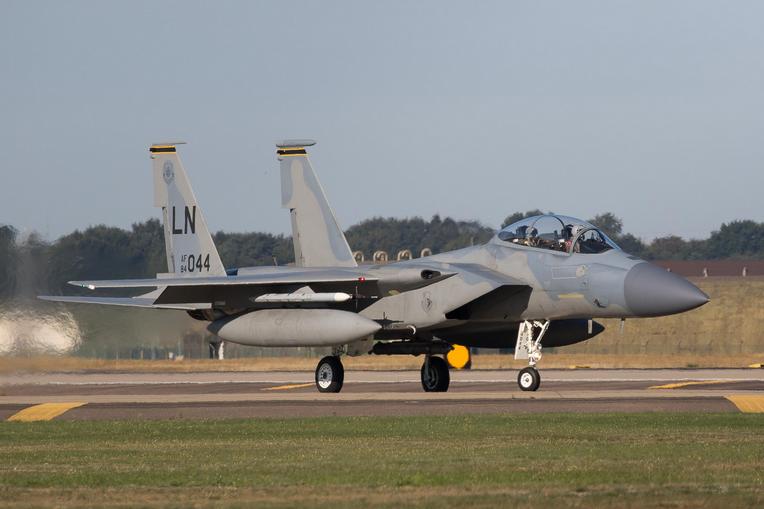 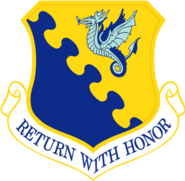 In 1995, 38 F-16C/Ds of the 31st Fighter Wing based at Aviano, were equipped with Sure Strike, which consists of Night Vision Goggles (NVG) and an Improved Data Modem, giving the aircraft quick reaction capability for CAS (Close Air Support) missions over Bosnia.

The IDM allows the aircraft to receive latitude, longitude and elevation of a target direct from a FAC (Forward Air Controller) on the ground. The system then inputs the data into the weapon system computer and displays it as a waypoint on the HUD. In July 1997, Lockheed Martin was awarded a contract to upgrade the Sure Strike system under a project called Gold Strike, which added two-way imagery transmission to Sure Strike, enabling the pilot to receive and transmit video images in the cockpit. 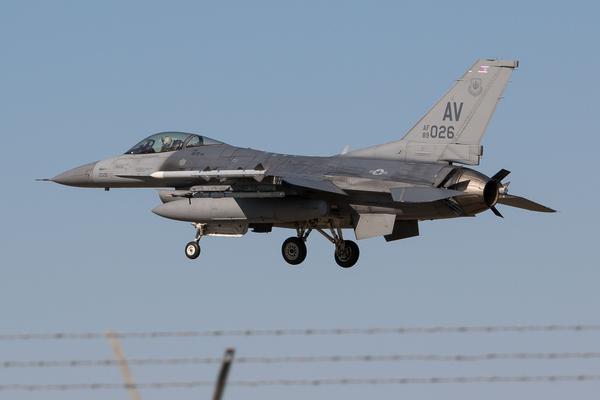 Designed to sharpen combat readiness and increase tactical proficiency, Point Blank saw over 50 aircraft participating, including first-time participation of US Global Strike Command B-52 bombers operating out of RAF Fairford, F-16s from the 510th and 555th Fighter Squadrons from Aviano Air Base, and US Marine Corps F-35Bs from Marine Fighter Attack Squadron 211 (VMFA-211).

General Jeff Harrigian, United States Air Forces Europe and Air Forces Africa commander, said “The 48th Fighter Wing and our UK allies continue to lead the way with each iteration of Point Blank. Through our continued partnership, we are demonstrating the ability of allies and partners to seamlessly operate with one another across all domains in challenging and demanding scenarios. This ultimately makes us experts at what we do, which is deliver air superiority anywhere across the globe.”

Mixing it with the 'Home Team'