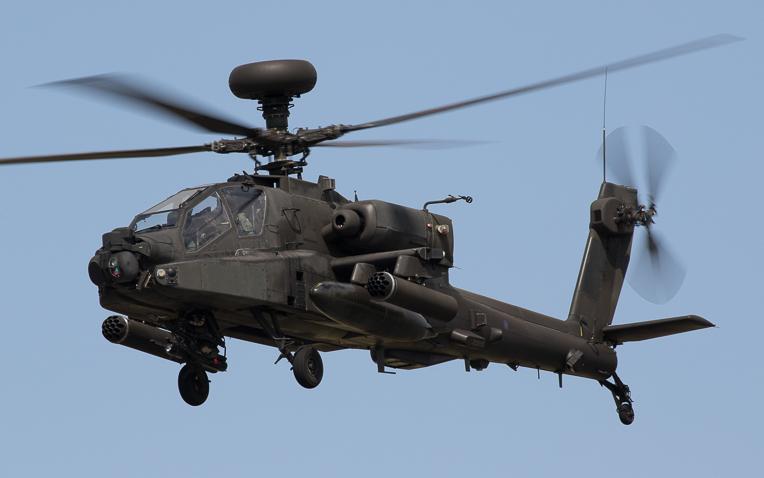 The British Army Training Unit Suffield (BATUS) Gazelle’s roles include casualty evacuation, reconnaissance, supervision and limited lift of passengers and equipment. It is worth noting the high-viz dayglo paint worn by the BATUS Gazelles, very different to the standard Gazelle scheme (photo, below)

BRW training is now conducted with the Juno HT.1 (above) at RAF Shawbury

Although still remaining the British Army Air Corps' primary airfield, Middle Wallop is a shadow of its former self, with a huge reduction in flying hours and aircraft numbers compared to 20 years ago. The Gazelle fleet has dwindled to little more that 20+, the Lynx fleet has been completely withdrawn and the Squirrel helicopters that once trained students at the base have been replaced by the Juno helicopter, based at RAF Shawbury. The Apache attack helicopter is very much the major player these days, even the Bell

Elementary Flying Training (EFT): This course lasts for approximately 16 weeks and is conducted by 674 Squadron at RAF Barkston Heath, and involves 40 hours of flying in the Grob Prefect T.1 two-seat trainer. 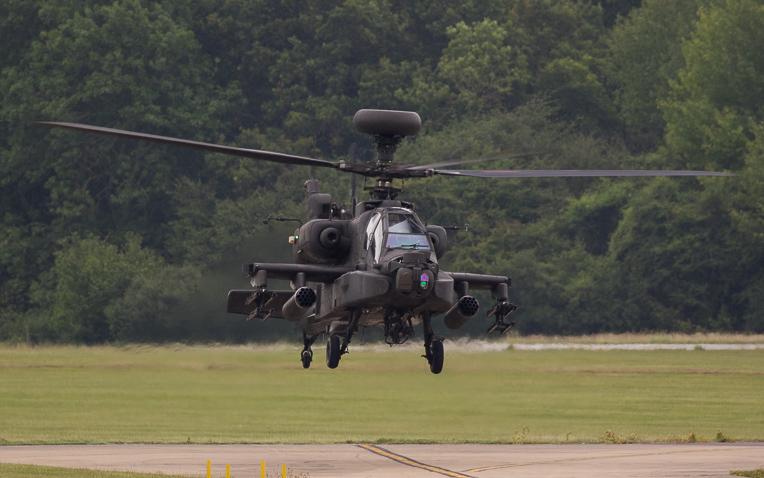 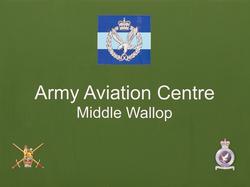 212 fleet, which was never large, has been reduced in numbers. So what does the future hold for Middle Wallop - well the AH-64D version of the Apache is due to be replaced by the far more capable AH-64E version; the AAC having already placed orders for 50, some of which are destined for Middle Wallop - in fact it is likely to see the first deliveries of the type as pilots convert to type here. There have been rumours for some time that Wattisham, home to the frontline Apache force, may close at some point in the future, which will then see the whole AH-64 fleet move into Middle Wallop. Only time will tell, what I do know is that there are currently no plans to close Middle Wallop and we can but hope that one day, maybe, it has its glory days once again.

Conversion To Type on the Apache, Bell 212 and Gazelle are still conducted at Middle Wallop

Brief Airfield History - Currently the Headquarters of the Army Air Corps, Middle Wallop has been used by the Royal Air Force, the U.S Army Air Force and the Royal Navy in the past. Prior to its establishment as the Army Aviation Centre, it was known as the School of Army Aviation (SAAvn), which formed in August 1965. At this time, SAAvn consisted of a Flying Wing, a Trade Training School and the ground instruction part of Tactics Wing, under its own Commandant. A major rebuild was undertaken in late 1966 to meet the expansion of the Army Air Corps and this changed Middle Wallop considerably. During the expansion, many of the old buildings were demolished to make way for an instructional block, which was named Stockwell Hall, after General Sir Hugh Charles Stockwell. In summary - 1940 Largest grass airfield opened in U.K; 1940-45 RAF, USAF, RN Station (HMS Flycatcher); 1947 Training Centre for Royal Artillery AOP pilots; 657 AOP Squadron and 227 Sqn OCU; HQ for Glider Pilot Regiment until disbanded in 1957; 1st September 1957 – Formation of modern day Army Air Corps; 1999 – first Apache WAH.1 arrives at Middle Wallop.

Phase 2: Army Flying Grading is conducted at Middle Wallop and consists of 13 hours over a 4-5 week period, flying the fixed-wing Grob Tutor T.1 aircraft (photo, above). The aim of this course is to test the student’s aptitude in a live flying environment and to identify whether they have the capability to become an Army pilot. Once accepted into the Army Air Corps as a pilot, the students undertake the following programme; Elementary Flying Training, Basic Rotary Wing Training, Advanced Rotary Wing Training, Operational Training Phase, Conversion to Type and Conversion to Role training.

Middle Wallop is home to two Training Regiments of the Army Air Corps; 2 (Training) Regiment and 7 (Training) Regiment, both of which conduct training for officers and soldiers in the aircrew and ground-crew roles. Flying training for both AAC Officers and Non-Commissioned Officers is conducted by 7 (Training) Regiment, which consists of three squadrons; 670 Squadron, 671 Squadron and 673 Squadron. 670 Squadron is responsible for the Operational Training Phase (OTP) of the Army Pilots Course; 671 Squadron provides Conversion to Type Training (CTT) on the Westland Gazelle and Bell 212 helicopters for graduates of the Operational Training Phase and students on the Aviation Crewman course; 673 Squadron conducts Conversion To Type (CTT) training on the WAH-64D Apache for both experienced and newly qualified Army pilots. 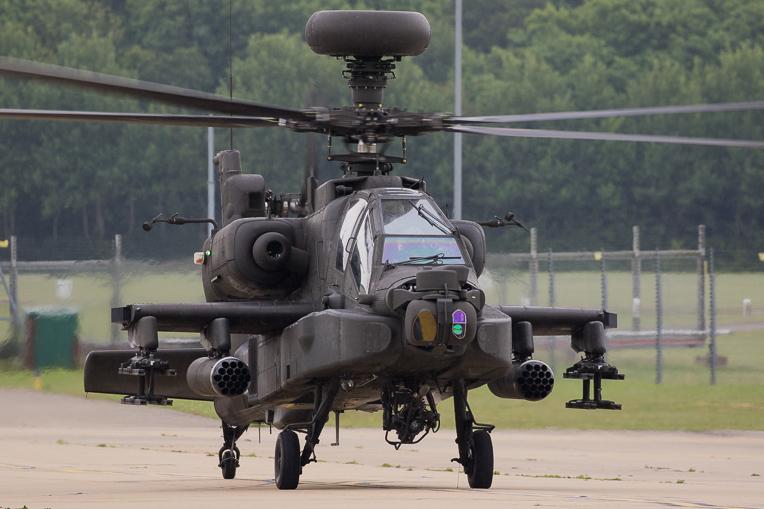 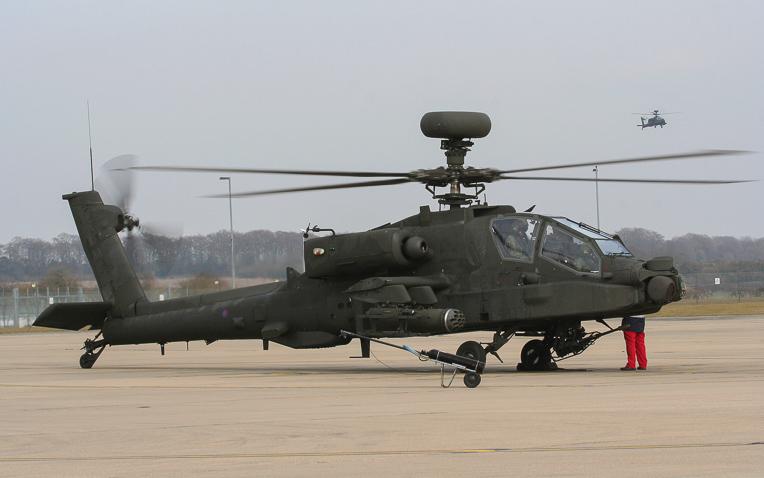 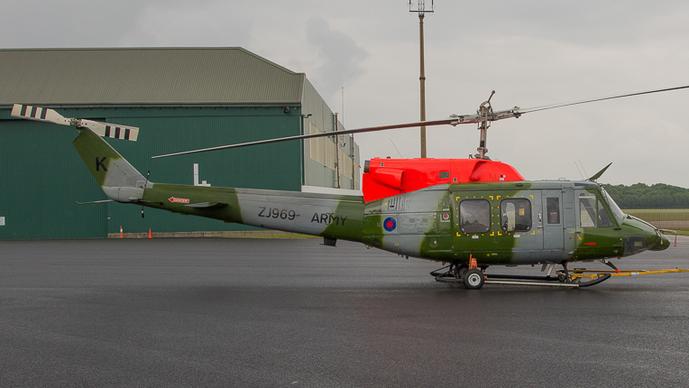 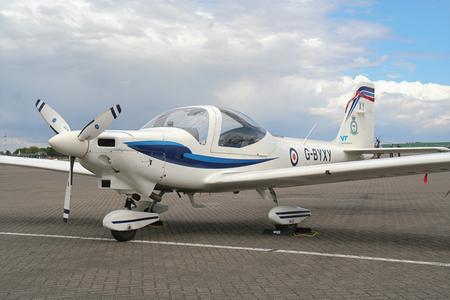 An Apache AH.1 from 673 Squadron heads towards the apron at Middle Wallop in June 2019

The AN/APG-78 Fire Control Radar above the main rotor is very evident in the photo above, as are the (Target Acquisition & Designation Sight (TADS) and Pilot Night Vision Sensor (PNVS) mounted on the nose 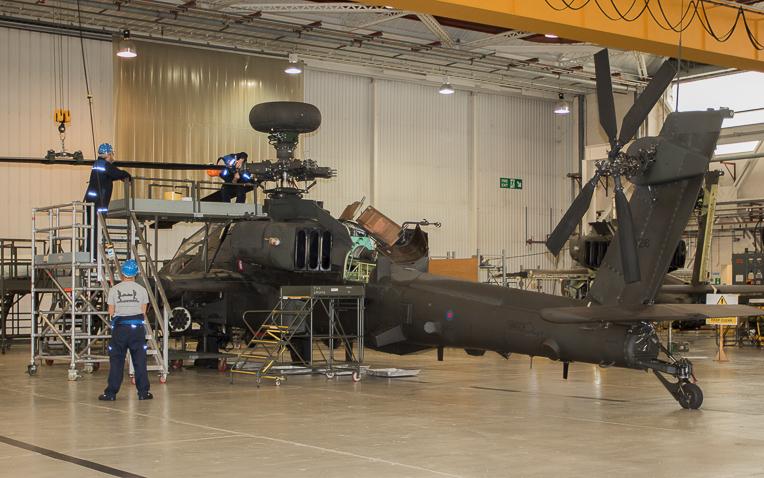 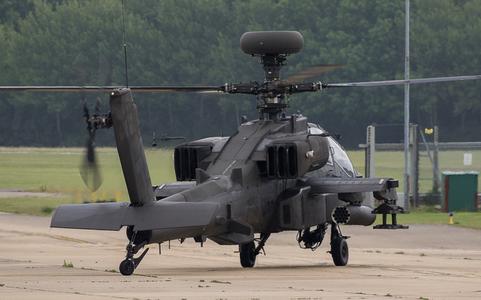 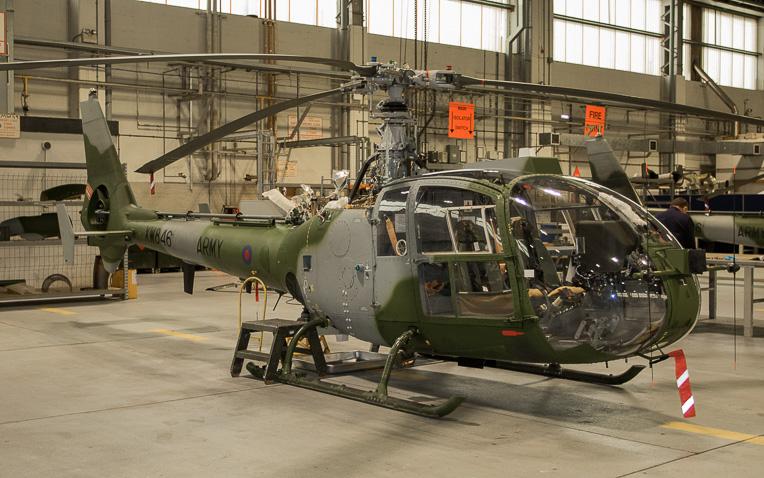 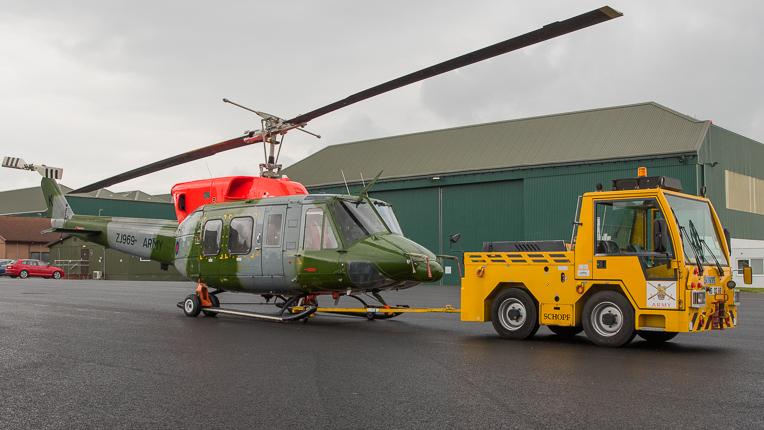 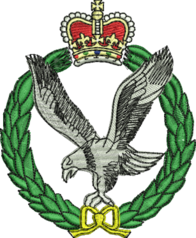 By far the most numerous type at Middle Wallop now is the WAH-64D Apache AH.1 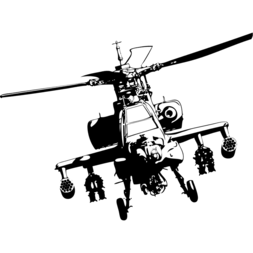 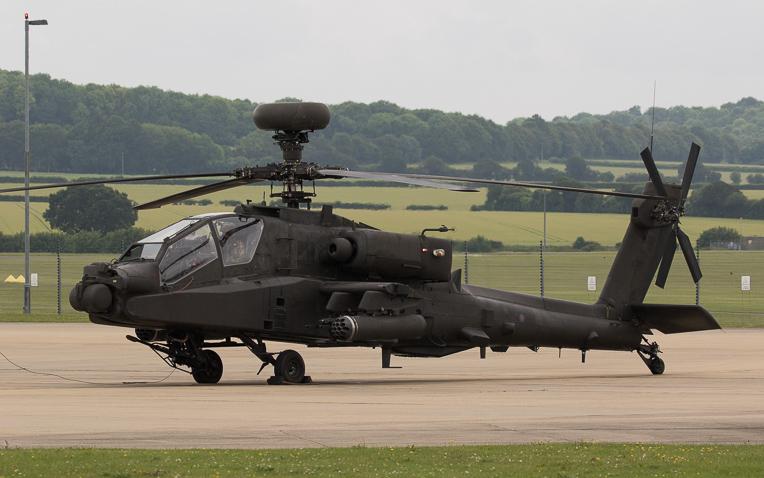 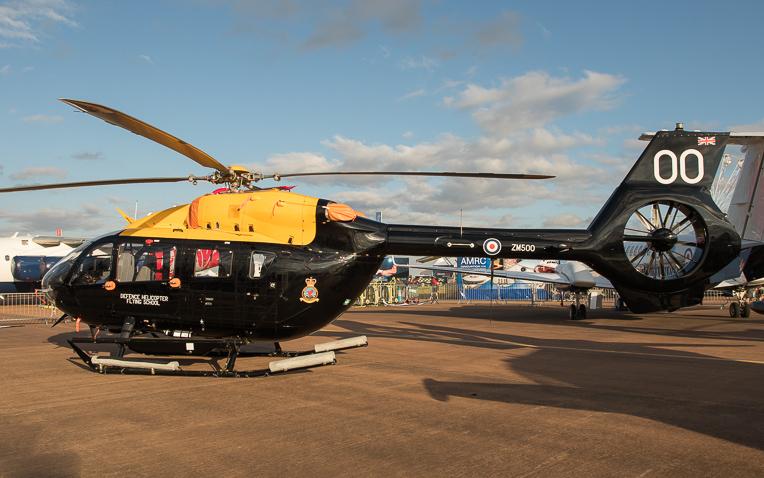 Phase 1: Flying Aptitude Testing (APT) takes place at RAF College Cranwell, Lincolnshire. Candidates complete a Medical Board to assessment prior to undertaking a series of tests confirming eye/hand/feet co-ordination and the ability to read instruments accurately. Successful candidates are then allocated a place on the Flying Grading course. Whilst these tests are common to all three Services, Army candidates require a minimum aircrew aptitude score of 80/180 to progress onto the next phase. Army candidates also have to pass Army Flying Grading (AFG), which the AAC considers a far more accurate indicator of the potential to be an Army pilot. 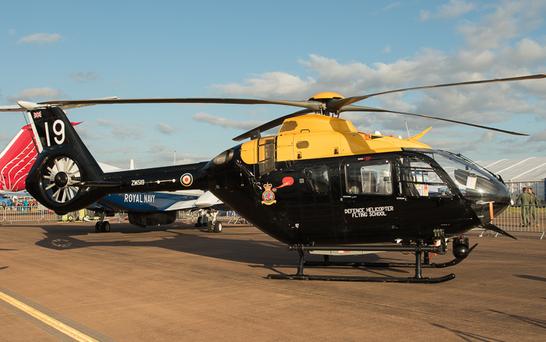 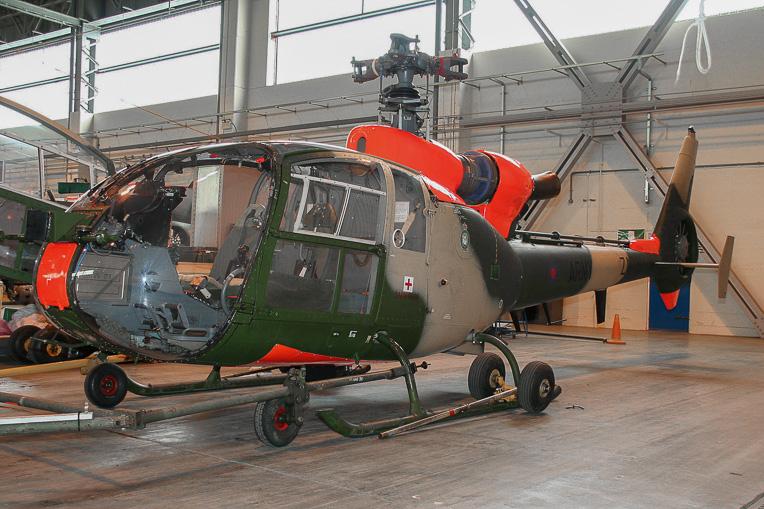 The Army Aviation Centre as it is now known, came into being on 1st August 2009 and conducts training for British Army officers and soldiers for both air and ground crew. It is currently home to 2 (Training) Regiment and 7 (Training) Regiment of the Army Air Corps (AAC). The AAC completes in excess of 50 flying training courses and teaches approximately 900 students each year at Middle Wallop. Current manpower incorporates around 300 military and Civil Service personnel, together with over 400 contractors. We had the opportunity to visit the British Army's primary aviation training base to get a glimpse at its day-to-day operations. 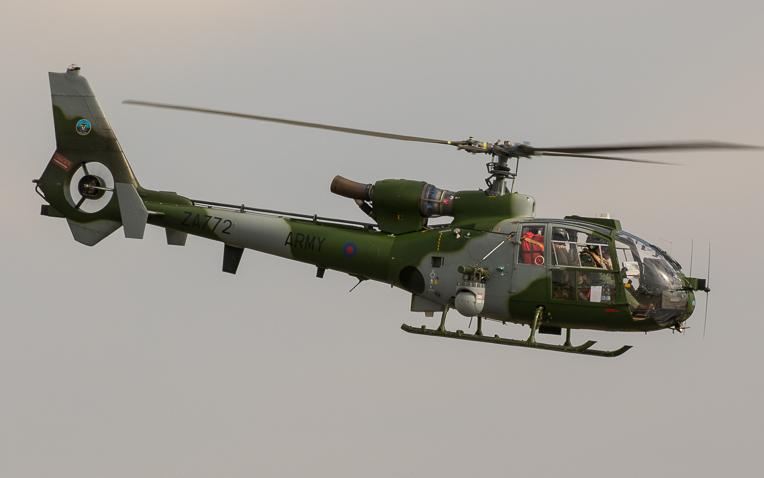 Once numbering over 200 in service, one of a small number of remaining Army Gazelle AH.1s undergoes maintenance at Middle Wallop in June 2019

The WAH-64D Apache AH.1 has proven to be a huge success in AAC service, so much so that the more advanced AH-64E version is now on order to replace the current D-version. Manufactured under license by AgustaWestland Helicopters, the AAC version differs most notably from the U.S version by having Rolls-Royce Turbomeca RTM-322 engines fitted, giving much improved performance over the General Electric T700. The British version of the Apache also benefits from folding main rotor-blades, giving the helicopter a much smaller footprint when on aircraft carrier flight decks. The AAC ordered 67 Apache AH.1, the first eight manufactured by Boeing and entered service from January 2001. 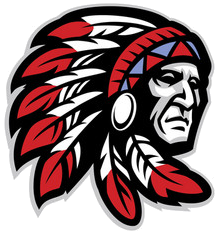 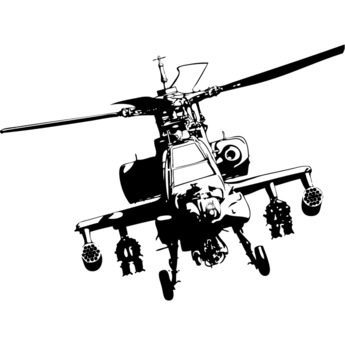 The Gazelle's cockpit provides an excellent field of view, making it a first class observation helicopter

ARW and the OTP are now flown on the Jupiter HT.1 helicopter, a larger version of the Juno HT.1 and based on the Airbus Helicopters H145 airframe

Pilot Selection Process
The Army Air Corps recruits pilots from three main sources:- Direct Entry (Officers only), the ranks of the AAC (Corporals and above), Officers and soldiers from other arms and branches of the Service (Corporal and above). Officers join the Corps after completing the Commissioning Course at the Royal Military Academy, Sandhurst. Unlike the all-officer Navy and Air Force helicopter pilot establishments, almost two-thirds of Army aircrew are Non-Commissioned Officers (NCO) - within the Army, NCOs of at least the rank of Lance Corporal with a recommendation for promotion. Personnel from within the AAC and from the remainder of the Army may also apply for pilot training. NCO pilots spend the majority of their service flying and many go on to be commissioned as Officers, normally to fill specialist flying appointments such as flying instructors. The U.K’s current Military Flying Training System (MFTS) takes aircrew from initial training through elementary, basic, and advanced flying training phases, preparing them for their arrival at their designated operational aircraft units. Formed in November 2006, Ascent Flight Training Ltd is the training design and delivery organisation appointed as the UK MOD’s official Training Service Partner.

Advanced Rotary Wing Training: This is also conducted at RAF Shawbury with 660 Sqn and lasts 16 weeks, providing a further 34 flying hours in the H145 Jupiter HT.1. It is at this stage that the student is also introduced to instrument flying, night flying and low-level navigation.

Operational Training Phase: This course converts a trainee military pilot into an Army pilot by teaching the student to operate the aircraft within a tactical environment. This is conducted by 670 Sqn, lasts 22 weeks and comprises 91 flying hours and a tactical simulation course. On successful completion of the OT Phase students are provisionally awarded their Army pilots brevet (Wings), which are confirmed on completion of conversion to an operational Army helicopter type. 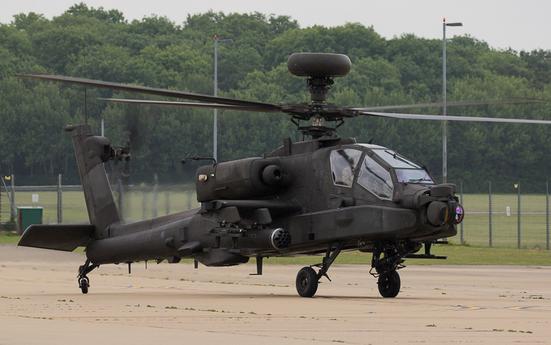 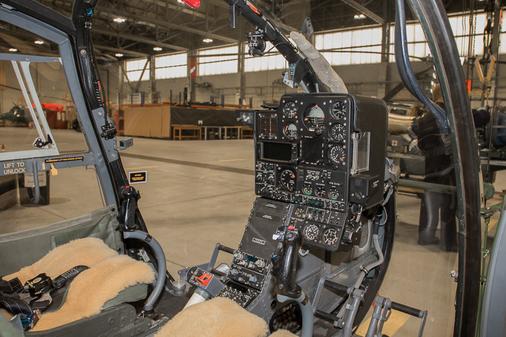 Conversion to Type Training: After provisionally gaining their wings, students destined for the Apache, Gazelle or Bell 212 remain at Middle Wallop with 671 Sqn to convert to the type of aircraft they will fly once they reach a frontline unit. Pilots destined for the Wildcat AH.1 move to RNAS Yeovilton to complete their CTT with 652 Sqn. The length of the CTT course varies according to the type of aircraft they will fly – as an example; the Apache CTT lasts for 26 weeks and consists of 60 flying hours, whereas the Gazelle and Bell 212 CTT only lasts between 10-12 weeks. Depending upon AAC requirements, pilots go on to fly the Apache, Bell 212, Gazelle or Wildcat helicopters, although it is not unusual to convert to another type during a pilots career. Having completed the CTT course the pilots then move onto a frontline squadron to complete the Conversion to Role (CTR) element. 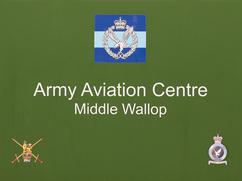 668 (Training) Squadron provides Phase 2 and Phase 3 training for ground-crews in re-arming, refuelling and ground handling on the Westland AH-64D Apache AH.1 attack helicopters, whilst 676 Squadron looks after the admin and well-being of all Phase 2 trainees.

A small number of Westland Gazelle AH.1s still remain in AAC service, as previously mentioned for BATUS, but also still providing support in Northern Ireland. The Gazelles are maintained and overhauled at Middle Wallop, so it is not unusual to see them active here