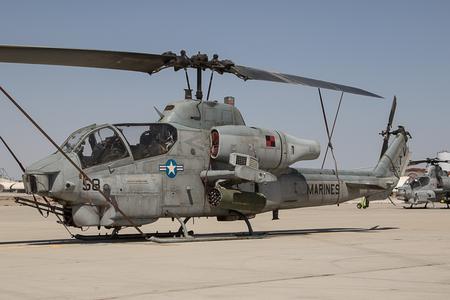 'Red Dogs'bow out with the Super Cobra 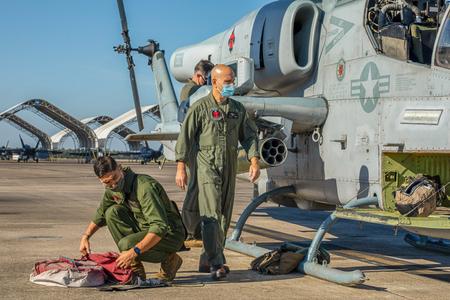 BuNo 165395 is seen (photo right) on the flight-line at MCAS New River on 13 May 2013 receiving some attention to its power-plant. The aircraft was on strength with HMLA-269 'Gunrunners' at the time of the photo. Part of 29 MAG (29 Marine Aircraft Group), 2 MAW ( Marine Air Wing), HMLA-269 has flown the AH-1J, AH-1T and AH-1W, and is due to transition to the AH-1Z 'Viper'. As with all HMLA squadrons '269' also flies the Bell UH-1Y Venom helicopter, the UH-1 and AH-1 regularly operating as a pair during operational missions.

The 19 October 2020 saw the Bell AH-1W Super Cobra retire from the US Marine Corps after 34 years of service - an official final flight for the AH-1W taking place over New Orleans accompanied by an AH-1Z Viper as part of the ‘Whiskey Sundown Ceremony’. The last AH-1W sortie had been flown five days earlier on 14 October by HMLA-773 Detachment-A at Naval Air Station Joint Reserve Base New Orleans, Louisiana. 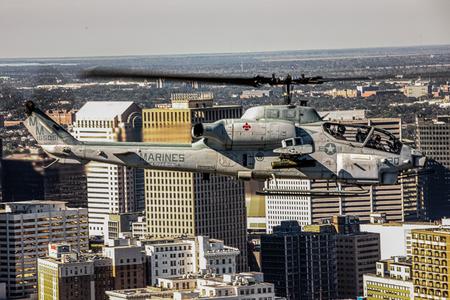 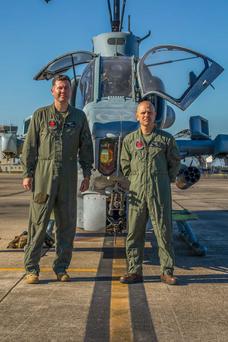 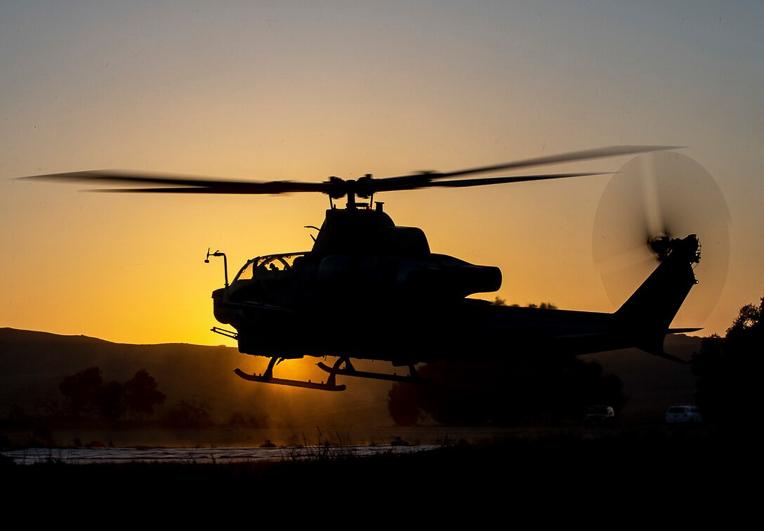 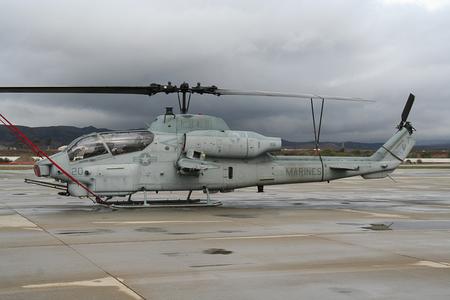 Of course the AH-1Ws sole purpose in life was to support Marine Corps 'Grunts' on the ground - providing close air support (CAS), and as such it was expected to conduct a lot of its operations from LHDs (Amphibious Assault Ships) operating as part of a Marine Expeditionary Unit (MEU). The AH-1W in the photograph (left) was captured on such a deployment as it departed the USS Bataan (LHD-5) in January 2012 operating as part of VMM-263 (Rein). The helicopter is assigned to HMLA-167 at MCAS New River, NC. Like many others, the unit has transitioned to the AH-1Z/UH-1Y. 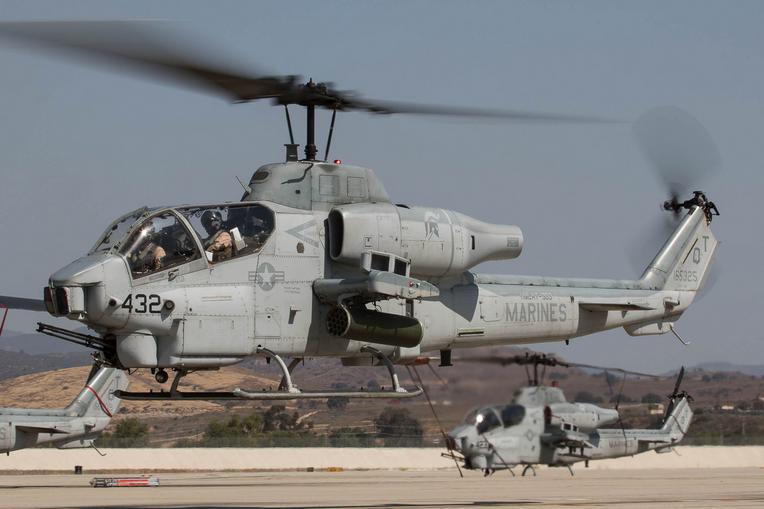 Bell H-1 program manager Michael Deslatte, said of the Super Cobra; “We are tremendously proud of the capabilities the AH-1W has brought to the United States Marines for the past 34 years. The Super Cobra’s tremendous legacy is a testament to the excellence and dedication the men and women at Bell put into these platforms for generations and we look forward to continuing that legacy for years to come.” Right up until the end of its life with the Marine Corps, the AH-1W continued to serve and through August 2020 the Marine Corps had achieved a staggering 933,614 hours of flight time, with the helicopter having served in numerous operations, including Desert Storm, Iraqi Freedom, Enduring Freedom, and operations in Libya. 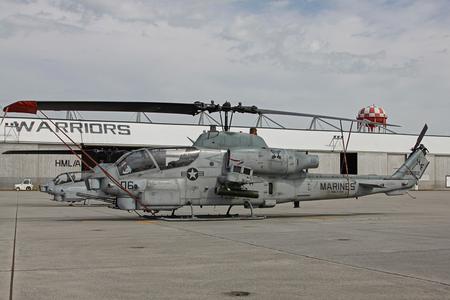 HMLA-167 based at Marine Corps Air Station (MCAS) New River, North Carolina, completed the last detachment of AH-1Ws earlier this year with the 26th Marine Expeditionary Unit assigned to the VMM-365 (Reinforced), onboard the amphibious assault ship USS Bataan (LHD-5). With the demise of the AH-1W, all HMLA (Marine Light Attack) Squadrons are now equipped with the AH-1Z Viper – a much improved version of the AH-1W. “The AH-1W Super Cobra has served admirably and leaves a remarkable legacy of on-time, on-target attack helicopter support for our Marines,” said Col. David Walsh, the program manager for Light/Attack Helicopter Programs (PMA-276). “Although the AH-1W chapter is closing, the AH-1Z Viper stands ready with even greater capability to support our Marines for years to come.”

The AH-1W was able to carry a vast array of armament - noticeably the familiar nose mounted gun turret of the Cobra, in the case of the ‘Whiskey’ model this being a M197 20mm 3-barreled gatling-gun; and up to four weapons pylons mounted on the stub-wings, which can house a combination of – Hydra 70 2.75inch rocket pods, 5inch unguided Zuni rockets, BGM-71 TOW missiles, AGM-114 Hellfire, AIM-9 Sidewinder, and even CBU-55 cluster bombs. 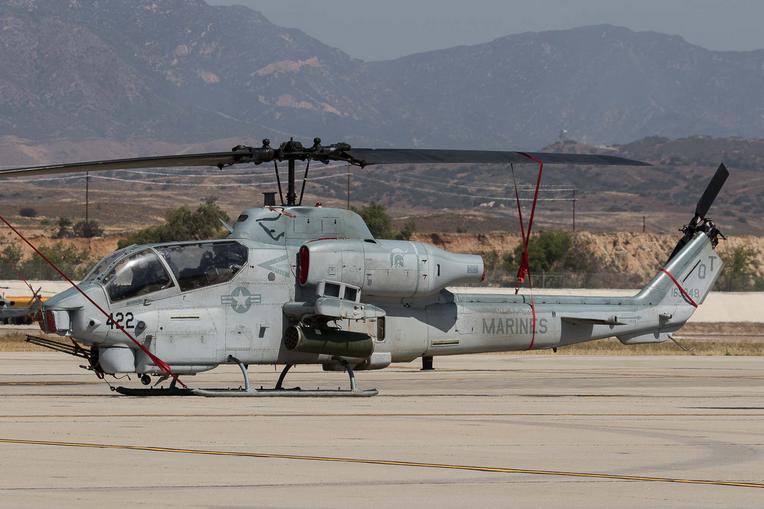 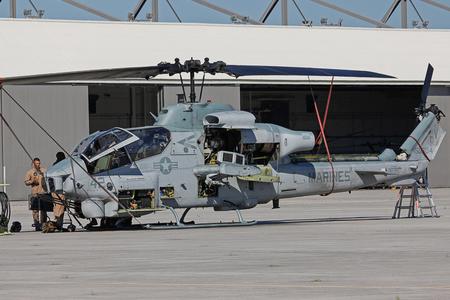 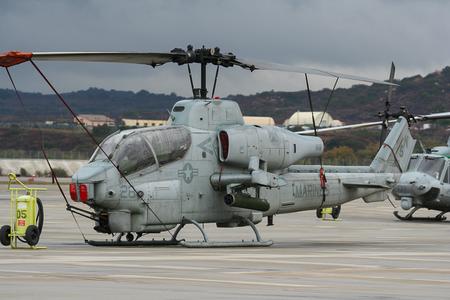 The Super Cobra above was photographed at MCAS Yuma in April 2015 during a Weapons & Tactics Instructor (WTI) course. On the strength of HMLAT-303, the aircraft (BuNo165363) is adorned with a commemorative paint scheme for the bombing of the 'Twin Towers' in New York in 2001

The nose mounted 20mm gatling-gun is clearly visible, with the helicopter also carrying a 19-shot 2.75inch M261 rocket dispenser on the stub-wing 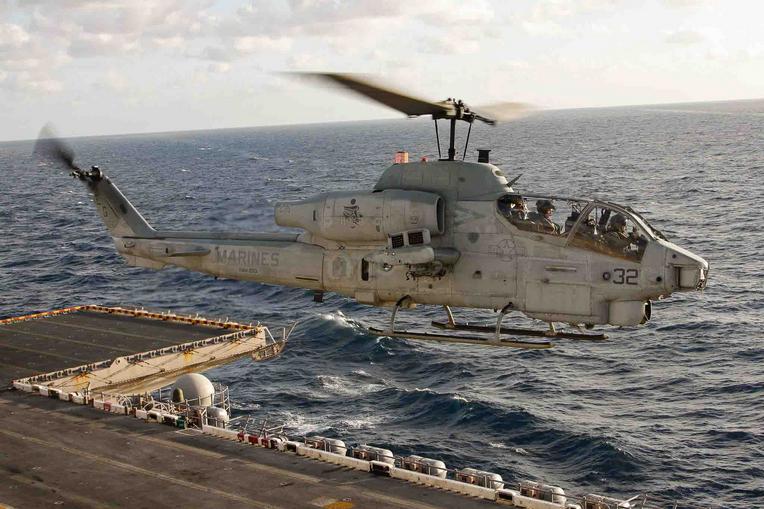 Based at MCAS Camp Pendleton, California,

Development of the AH-1G Huey Cobra for the US Army led to the Marine Corps showing an interest as a replacement for their Bell UH-1E gunships, which ultimately led to the Corps loaning a batch of 38 AH-1Gs. Despite having performed relatively well in Southeast Asia, a number of shortcomings were identified, not least of which was the single engine and lack of a rotor brake. Later development of the AH-1J Sea Cobra in 1971 saw 67 aircraft delivered to the US Marine Corps, followed by the upgraded AH-1T.

The AH-1W served with a number of Light Attack Squadrons during its career. The squadrons were nominally based at Camp Pendleton, California, and New River, North Carolina, however two Reserve squadrons also operated the Super Cobra, namely HMLA-773 at New Orleans and HMLA-775 at Camp Pendleton. Over the years I have been lucky enough to photograph aircraft from all of the frontline units that flew the AH-1W, but sadly never had the opportunity to capture any images of the two Reserve units. Below are a few images of aircraft from each of the frontline HMLA squadrons. The ones at MCAS Cherry Point were photographed there whilst their home base at nearby New River was undergoing a large-scale re-build of the hangar and flight-line areas in 2013, which led to the AH-1 squadrons deploying temporarily to Cherry Point. The images at MCAS Yuma were shot during a WTI. 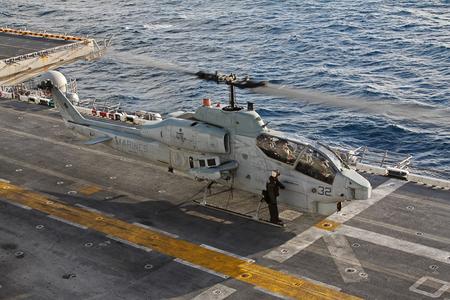 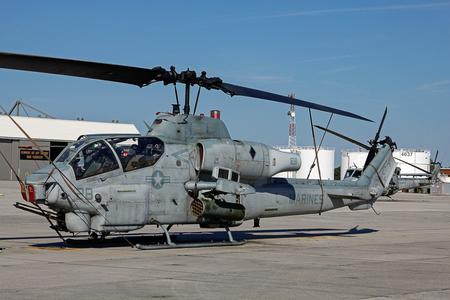 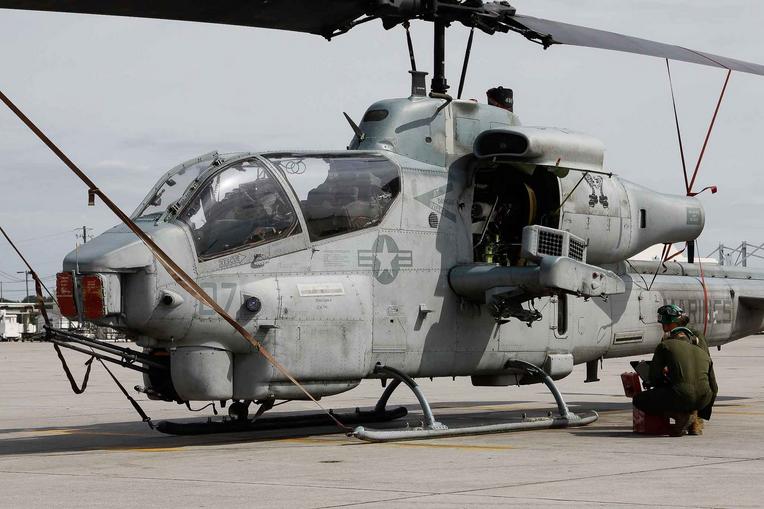 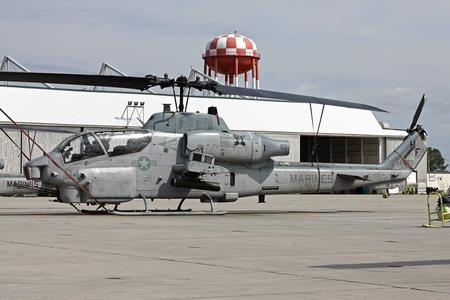 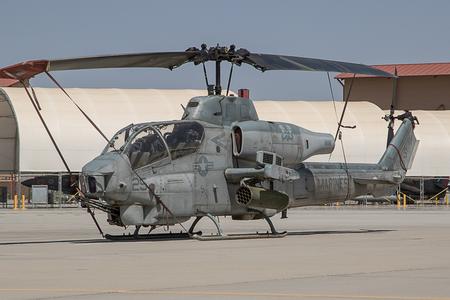 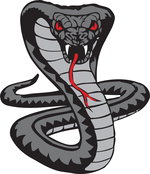 Originally designated as the AH-1T+, the AH-1W Super Cobra first flew on 16 November 1983 at Bell’s Flight Research Center in Arlington, Texas, with Bell delivering the first AH-1W to the Marines on 27 March 1986. The AH-1W version finally gave the Corps the twin-engine attack helicopter that it had wanted, with a pair of General Electric T700-GE-401 turboshafts providing the power. Introduction of the Super Cobra also saw new weaponry – including the AIM-9L Sidewinder air-to-air missile (AAM). In total 179 AH-1W attack helicopters were delivered to the US Marine Corps. 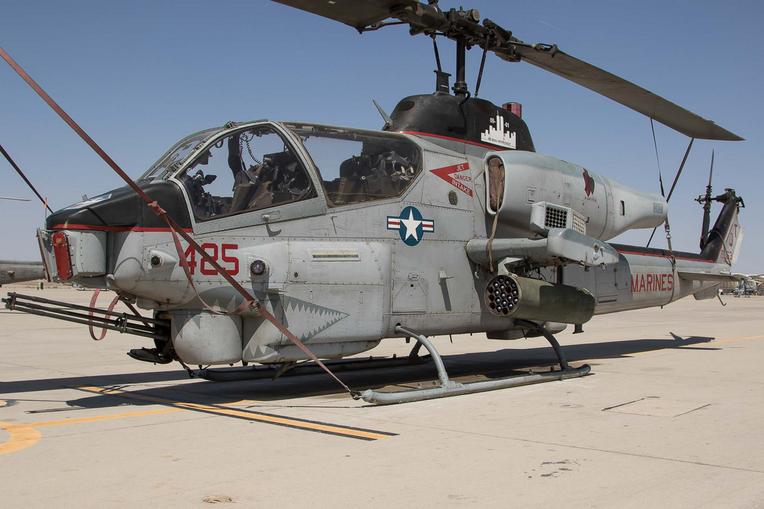 HMLAT-303 'Atlas' has trained over 3000 Cobra and Huey pilots for the US Marine Corps, US Navy and other NATO countries.  HMLAT-303 is the only Marine Corps squadron tasked with training newly designated Marine Light Attack Helicopter replacement, refresher and conversion pilots, whilst also spearheading the fleet’s conversion to the new Bell UH-1Y and AH-1Z helicopters, which have replaced the older AH-1W. 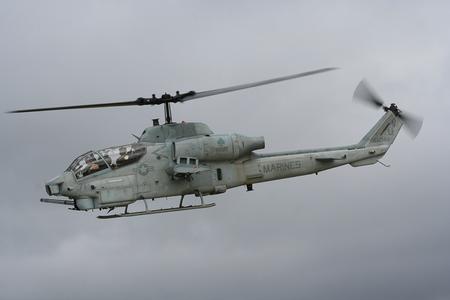 When they were first delivered, all AH-1Ws were originally painted in the USMC tri-color (black, green, gray) camouflage scheme that first appeared in the mid-1980s and was applied to other types such as the CH-46 Sea Knight. Just prior to deploying to Desert Shield, HMLA-367 painted all of their AH-1Ws and UH-1Ns in a two-tone grey scheme for lower visibility, which was later adopted across the fleet. BuNo163948 (photo, left) is captured at MCAS Camp Pendleton showing off perfectly the Light Ghost Grey (FS36375)/Medium Grey (FS35327) camouflage pattern

Lt. Col. Charles Daniel, a pilot with HMLA-773, walks towards the AH-1W Super Cobra prior to its final flight at NAS Joint Reserve Base, New Orleans, on 14 October 2020

So the sun has finally set on the Bell AH-1W Super Cobra, or at least it has in US Marine Corps service. However, the helicopter still continues to operate around the world with other air arms, and so it hasn't quite disappeared as yet. Initially designed from scratch as the world's first purpose-built attack helicopter gunship, the AH-1 has without doubt proven to be a capable aircraft, perfectly designed for its purpose and has probably exceeded the expectations of those that designed it - so much so that the AH-1Z that is now equipping Marine Corps HMLA squadrons is almost identical to look at as the AH-1W that it supercedes. Whilst very much a different beast in all but appearance, the AH-1Z Viper takes all of the good things that have come from development of the earlier AH-1s and makes them better. So although the Cobra is gone, the Viper has taken up its role. It's simply a case of 'The King is Dead, Long Live the King'. 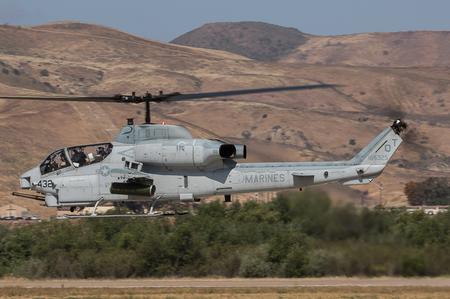