The Lockheed U-2S is routinely flown at altitudes in excess of 70,000 feet, requiring the pilot to wear a full pressure suit similar to those worn by astronauts (as can be seen in the photo, left). The low-altitude handling characteristics of the aircraft combined with its bicycle-type landing gear requires precise control inputs during landing; with forward visibility also being limited due to the extended nose of the aircraft and its tail-dragger configuration. This requires a second U-2 pilot to monitor and assist the aircraft's pilot by using a 'Chase Car' - assisting the pilot by providing radio inputs for altitude and runway alignment. These characteristics combine to earn the U-2's  widely accepted title as the most difficult aircraft in the world to fly.

from the United States, it was not unusual to see up to four aircraft at the base over a 2-3 day period, as generally speaking two aircraft transited east and two went in the opposite direction back to the CONUS. 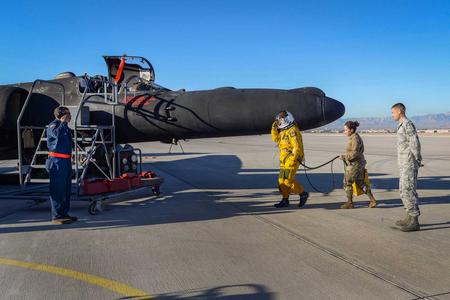 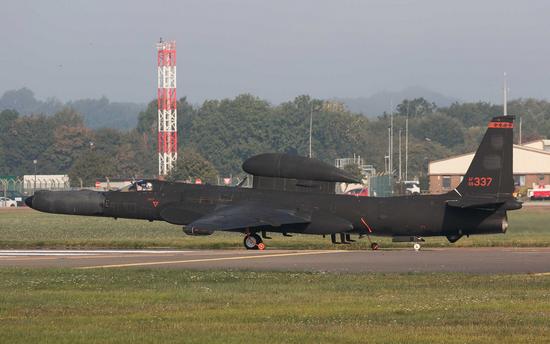 These three forms of intelligence gathering capability intercept, and in some cases geo-locate both communications such a radio calls, signals such as encrypted data streams, and enemy radar emissions. Together they are used to build a picture of the electronic battlefield, to be exploited in either near-real time via data-linking to a ground station, or collecting data can be stored for analysis once the aircraft returns to base.

Seeing U-2 reconnaissance aircraft at RAF Fairford has become a fairly regular sight in recent years as aircraft transited the base on their way to and from RAF Akrotiri, Cyprus, and Al Dhafra, United Arab Emirates. 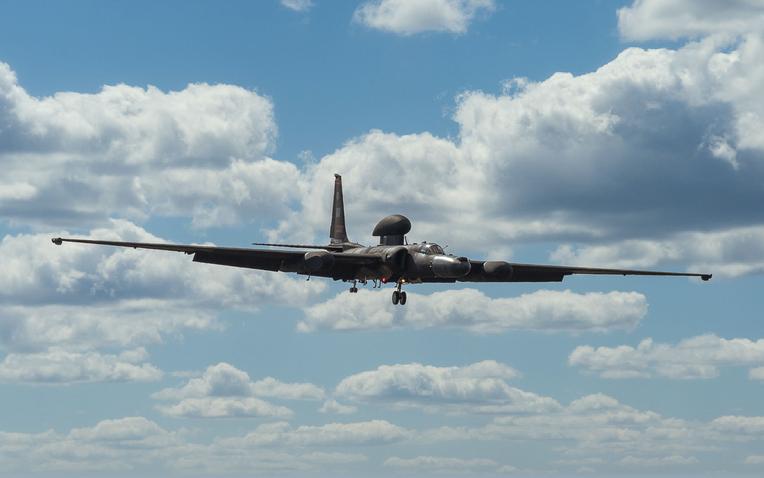 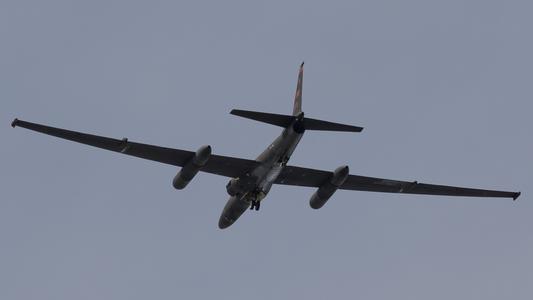 Having just completed a 8.5 hour mission as 'Kine01' the Dodge Charger chase car can also be seen

RAF Fairford is well known to aviation enthusiasts across the world as the home  of the Royal International Air Tattoo, or RIAT. The Air Tattoo is billed as the world’s largest military airshow, something it has boasted for many years now, but outside of that period each year in July (2020 aside of course) when the base ‘comes alive’ with hundreds of additional aircrew, support personnel, volunteers and large numbers of aircraft, RAF Fairford also hosts a variety of frontline military aircraft that utilise the base facilities – most noticeably the regular deployments of strategic bombers from United States Global Strike Command; B-1 Lancer, B-2 Spirit and B-52 Stratofortress bombers having all made Fairford their 'home' on a regular basis.

RAF Fairford has not had any ‘based’ aircraft since the 11th Strategic Group’s KC-135 Stratotanker aircraft left in August 1990, but that all changed a little over 12 months ago when the 99th Expeditionary Reconnaissance Squadron took up residence with two Lockheed U-2S aircraft. The 9th Reconnaissance Wing, based at Beale Air Force Base, California, had used RAF Fairford for a number of years for ‘Busy Relay’ flights - with U-2s from RAF Akrotiri, Cyprus, and Al Dhafra, UAE, returning home for depot level maintenance at Palmdale, California.

The Raytheon ASARS-2 (Advanced Synthetic Aperture Radar System) SIGINT (SIGnals INTelligence) suite is housed in an elongated detachable nose cone. Developed for the TR-1A (a tactical reconnaissance version of the U-2), ASARS consists of a pair of advanced electronically scanned array sideways-looking radar antennas mounted on each side, the system taking high-fidelity radar imagery of the battleground out to about 100 miles on either side of the aircraft's position.

The Collins Aerospace SYERS (Senior Year Electro Optical Reconnaissance System) camera systems primary optical sensor can peer deep into enemy territory and possesses outstanding resolution. The latest 10-band, high spatial resolution SYERS-2C sensor provides an unmatched ability to find, track and assess moving and stationary targets. Developed with open mission systems standards to enable command, control and data exchange with 5th generation platforms such as the F-35, the sensor has become a critical asset to commanders, bringing unique advantages to joint operations across the battlespace. The SYERS-2C intelligence, surveillance and reconnaissance imaging sensor and its integration into the U-2 Dragon Lady further enhances the aircraft's ability to provide unparalleled strategic intelligence. The upgrades multi-spectral imaging, has vastly improved SYERS ability to see through smoke, light fog and transient weather. With its additional infra-red capability, it can pick up the heat signature from a vehicle's engine, effectively countering the enemy's attempt at concealing it.

With #80-1067 having returned to CONUS a few days after arriving, a small number of other U-2s came and went, with #80-1071 remaining at Fairford – flying its first mission on 4 November using the callsign Peppy 01. The mission lasted approximately eight hours, with a second mission flown three days later. Later the same week, a second U-2S #68-10337 arrived at Fairford. The aircraft was in what is known as a ‘clean’ configuration, carrying no dorsal pods or SYERS/ASARS nose and 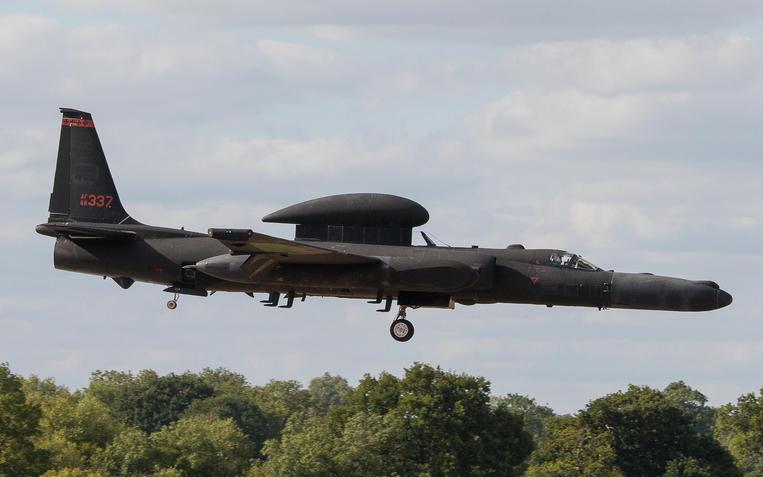 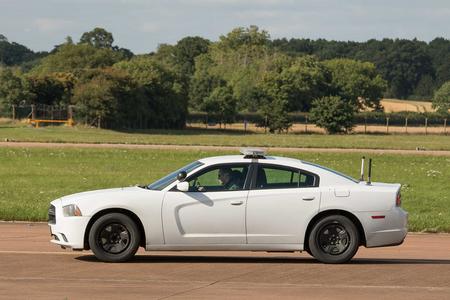 was initially used at RAF Fairford for maintaining pilot proficiency – however #68-10337 has been operated as the ‘mission’ aircraft for some months now, with #80-1083 being used as the ‘check flight’ aircraft.

Various makes and models of cars have performed the role of U-2 chase cars over the years, including various models of Dodge Charger, which have been in service for years now. Chevrolet Camaros and Pontiac GTOs have also been used and in 2017 RAF Fairford even employed a Tesla S for a short period of time. The current transport of choice at Fairford for the role are Dodge Chargers, two of which are believed to be in use. One of the cars can be seen in the photo on the right as it patiently sits at the threshold of Runway 09 awaiting the return of a U-2.

With most U-2 mission configurations the most often seen are the Super-pods attached underneath the aircraft’s wings, used to carry many types of surveillance equipment including data-links. They usually house the ‘Senior Glass’ communications, signals, and electronic intelligence (COMINT, SIGINT and ELINT) packages. The system began life as three separate installations, known as Senior Sear, Senior Ruby and Senior Glass, but after a mid-1990's initiative to integrate all these systems together in a modular configuration they can now fly and work together to some degree. 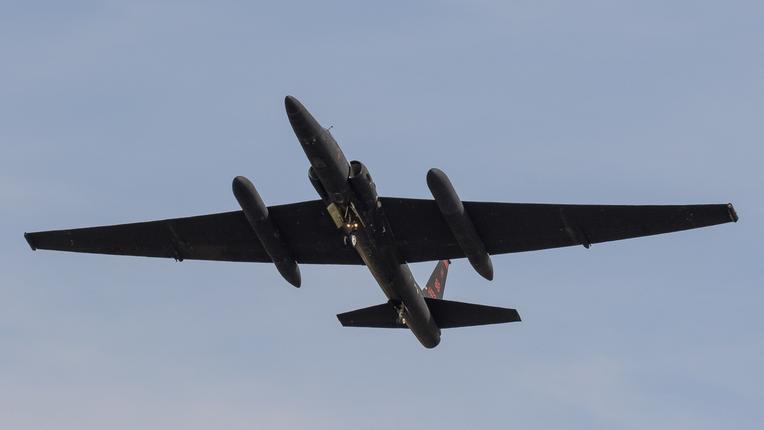 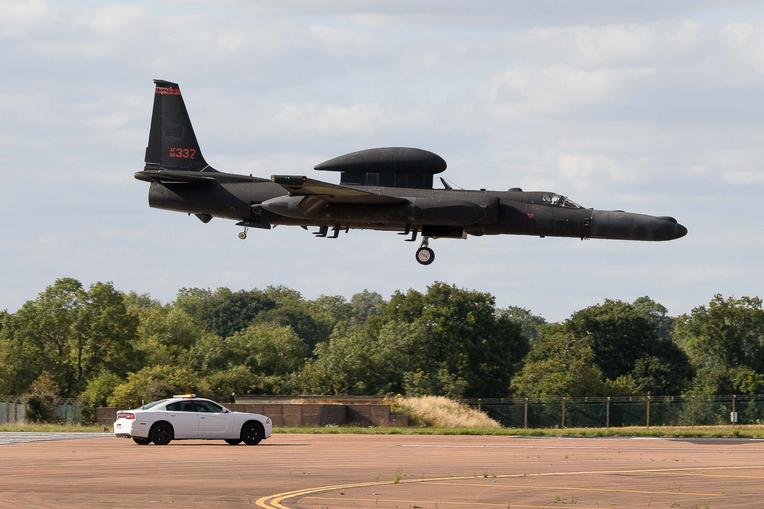 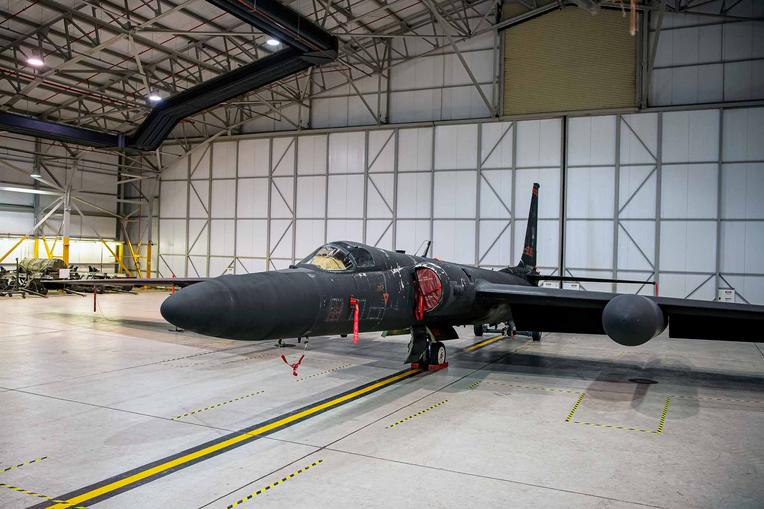 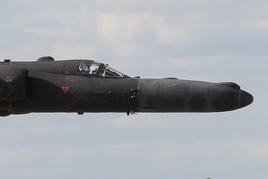 The image left shows off to good effect the vast antenna array below the fuselage, together with the Senior Span dorsal pod and ASARS nose configuration. Of note is that the U-2s assigned to the 99ERS at RAF Fairford have had the 'BB' tailcode for Beale AFB scrubbed out, something that was not done when they were operating from RAF Akrotiri, Cyprus, nor Al Dhafra, UAE. At the time of this photo in July 2020, this particular aircraft was performing almost daily missions over the Baltic Sea.

The Lockheed U-2 is powered by a lightweight, fuel efficient General Electric F118-101 engine, which negates the need for air refuelling on long duration missions. The U-2S Block 10 electrical system upgrade replaced legacy wiring with advanced fibre-optic technology and lowered the overall electronic noise signature to provide a quieter platform for the newest generation of sensors.

A recent U-2 Reliability and Maintainability Program provided a complete redesign of the cockpit with digital colour multifunction displays and up-front avionics controls to replace the 1960s-vintage gauges which were no longer supportable.

The full Senior Glass installation includes the Senior Spear COMINT (COMmunications INTelligence) installation on the right super-pod, along with a massive antenna farm on the aircraft's belly and the Senior Ruby electronic intelligence (radar emission) collection system on the left-wing super-pod. U-2s equipped with this ventral antenna farm have also been rumoured to be capable of networking relay functions, providing over the horizon connectivity to aircraft and ground units within the U-2s area of operations. The two bulges on the bottom of the aircraft, one below the intakes and one behind the tail wheel are the aircraft's within line of sight data-link antennas used for transferring the data collected by the aircraft's sensors down to ground stations and ground data entry points in near real time. 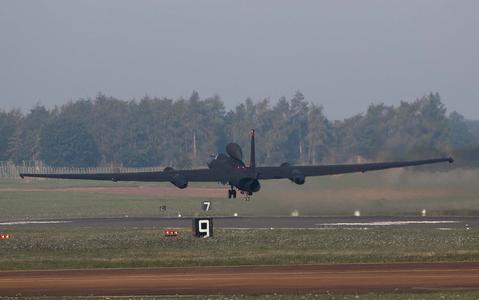 This year, the Lockheed U-2 Dragon Lady celebrates 65 years of supporting the US Air Force’s mission with superior surveillance. An impressive design for its time, the original U-2 aircraft, albeit a much different aircraft to those in service today, took its first flight on 1 August 1955. In true Lockheed Martin Skunk Works fashion, the aircraft’s modular design provided flexibility and agility, allowing for multiple generations of Skunks to evolve the aircraft and develop solutions to evolving future threats. Today, the U-2 continues to defy the possible, while continuing to fill an intelligence, surveillance and reconnaissance role - an essential element in shaping the future battlespace. 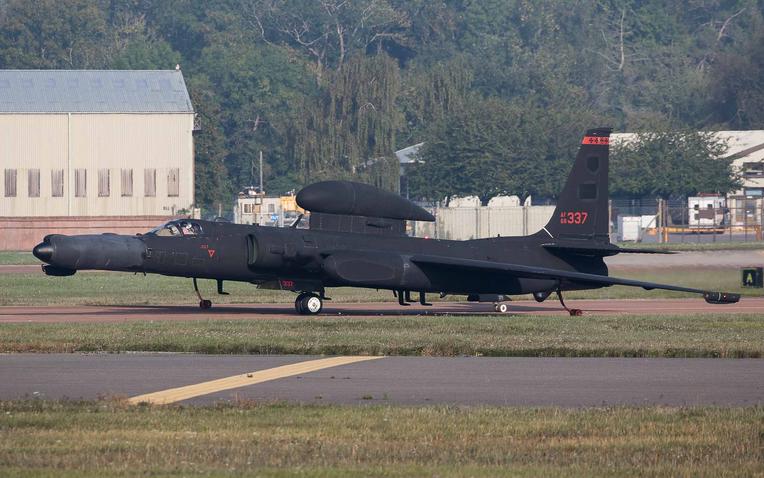 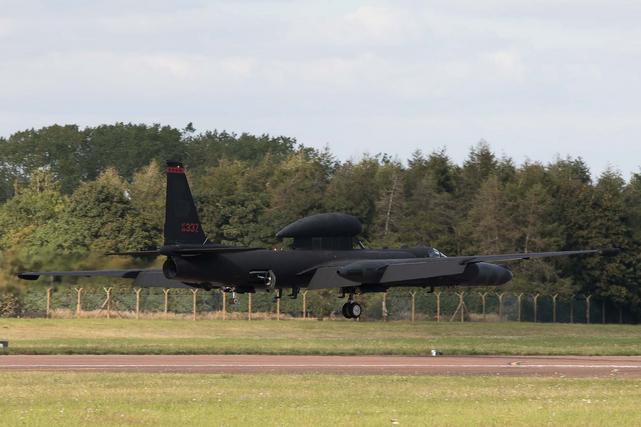 99th Expeditionary Reconnaissance Squadron ‘Arctic Dragons’
Part of the 9th Reconnaissance Wing at Beale Air Force Base, California; when operating from the Al Dhafra Air Base the 99ERS was known as the ‘Desert Dragons’, but since it has operated from Fairford it has taken up the nickname of ‘Arctic Dragons’, presumably referring to the unit's missions that generally head off in a northeasterly direction towards the Baltic Sea, possibly even reaching as far north as the Barents Sea, where they monitor Russian military activity in the area. Although there are only two Dragon Lady's (as the U-2S is known) on 99 ERS strength, with just one in full mission fit at any given time – the unit maintains a busy schedule with sorties flown most weekdays and occasionally even at weekends. According to the United States Air Force, "The 99 ERS mission is to employ High-Altitude Intelligence, Surveillance and Reconnaissance to execute effective and sustained U-2 operations, providing critical intelligence for use by the highest levels of our government"

The large radome atop the aircraft’s spine is the satellite communications system known as Senior Span or Senior Spur, depending on how the jet is configured. Senior Span is fitted to provide the conveyance of signals intelligence (SIGINT) collection data beyond the line of sight and around the globe.

The Senior Spur system is used for transmitting other forms of data, including image intelligence and electronic intelligence (ELINT) gathered by the U-2's sensors via data uplink to a satellite communications system – allowing real time mission feeds. 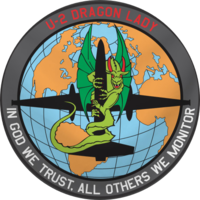 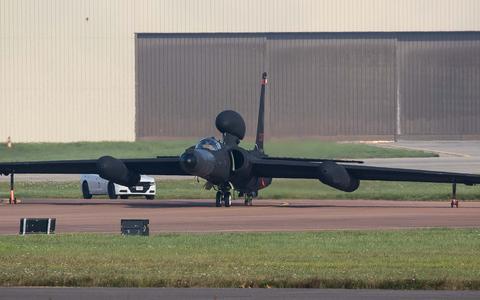