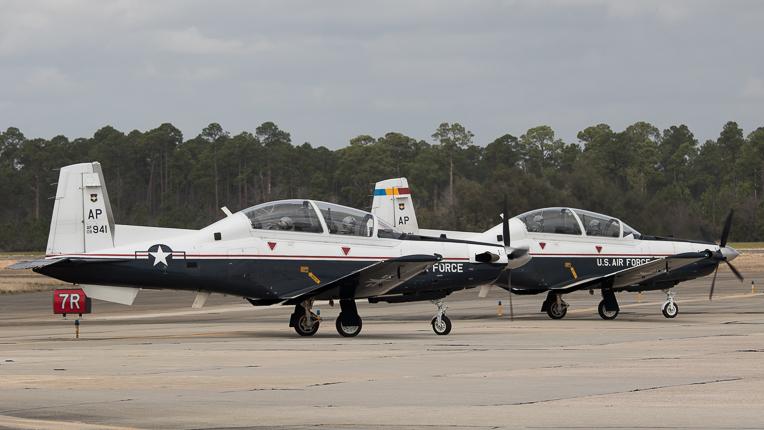 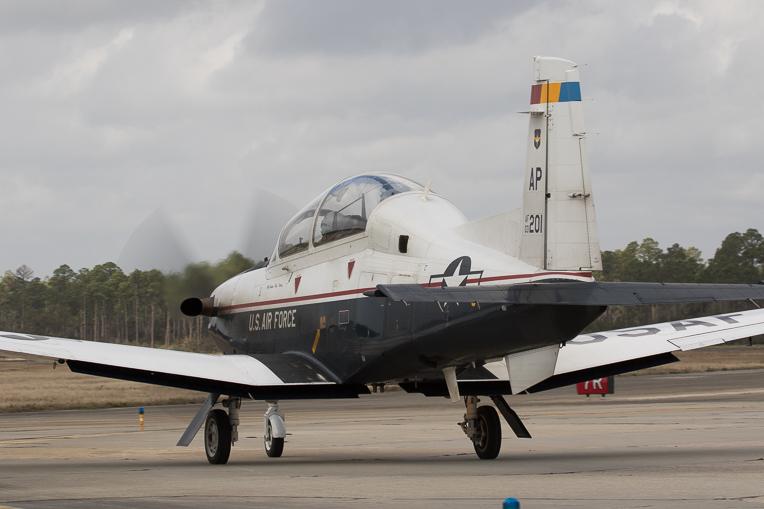 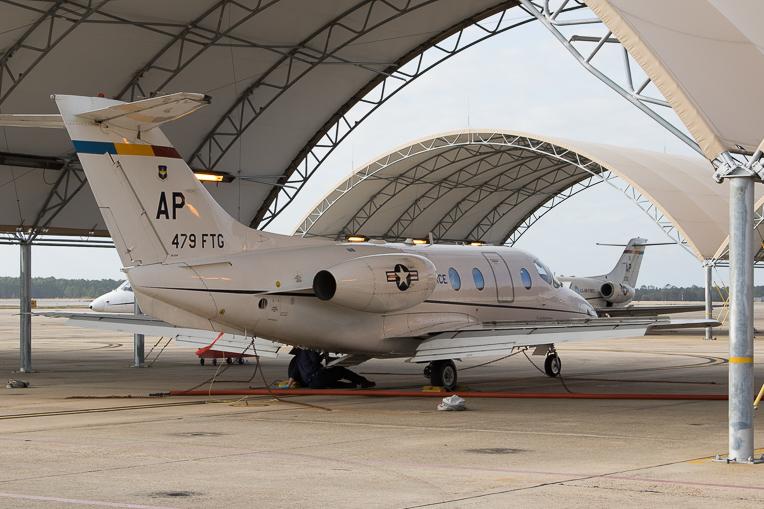 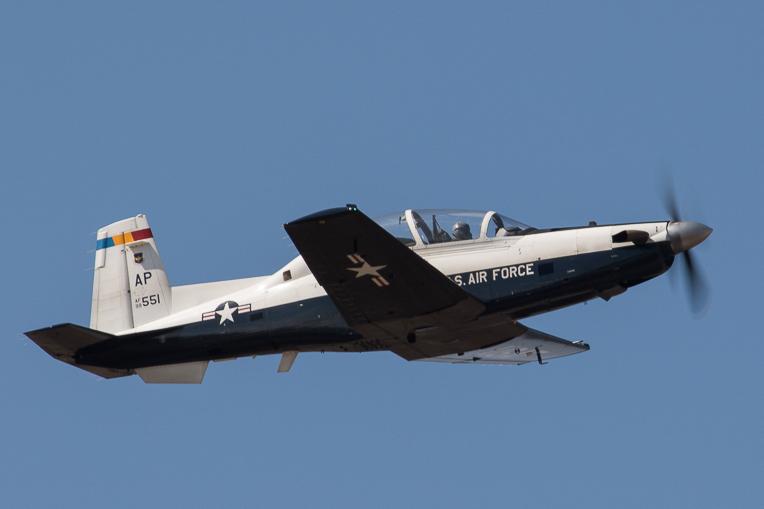 These are represented as a set of contours for each intensity level, and can be in a vector or bitmap format in the radar's data files. At run time, the instructor can specify the size, location, orientation, top and bottom altitude, and intensity level of each cloud. If multiple clouds overlap, the intensity levels are combined in the overlapping areas. In VRSG, instructors want a representation of the clouds that corresponds to the clouds that the students can see on their radar display.(Courtesy of AAI Corporation)

Undergraduate Combat Systems Officer training; CSOs often find themselves as the mission commander in multi-crew aircraft. In these circumstances, the Combat Systems Officer manages the mission and integrates systems and crew with the aircraft commander to collectively achieve and maintain situational awareness and mission effectiveness. CSOs are trained in navigation, the use of the electro-magnetic spectrum, and weapon system employment. Aircrew responsibilities include mission planning, mission timing, weapons targeting and employment, threat reactions, aircraft communications, and hazard avoidance.

#90-0412 takes a rest on the ramps at Pensacola, with some maintenance presumably being undertaken on the tailplane

Manufactured by the AAI Corporation, an operating unit of Textron Systems, the training for CSOs uses a Virtual Reality Scene Generator (VRSG) to provide the visuals for its T-25 Simulator for Electronic Combat Training (SECT) system.

The T-25 SECT is a software-based training system that is hosted on commercial desktop PCs and supports a rapidly changing and dynamic real-world military aviation environment.  The system is used to train U.S Air Force and NATO officers as part of the Combat Systems Officer training programme at Pensacola and provides undergraduate training that includes air warfare, electronic warfare, navigation, and reconnaissance missions. Training scenarios expose students to entities that represent friendly and hostile forces as well as non-combatant air, land, and surface platforms.

U.S Navy's student Naval Flight Officer (NFO) programme under the aegis of Training Air Wing Six, with USAF instructors embedded into the wing. U.S Navy squadrons VT-4 and VT-10 conducted basic and intermediate flight training, with VT-86 conducting advanced training for the USAF undergraduate navigator students destined for assignment as WSOs (Weapons System Operators) in tactical aircraft. Prior to 2010, those USAF students destined for the F-15E Strike Eagle and the B-1B Lancer, as well as several USAF navigator flight instructors, were also fully integrated into these squadrons. Starting in the summer of 2010, following completion of their Initial Flight Screening (IFS) on the Diamond DA-20 aircraft at Pueblo, Colorado, all U.S Air Force CSO students began attending training at NAS Pensacola as the training squadrons at Randolph AFB closed down in accordance with the 2005 BRAC findings. 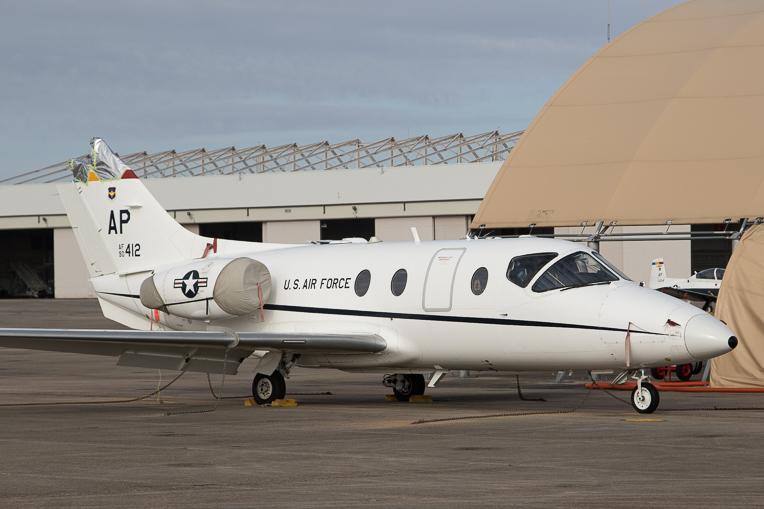 With the establishment of the 479 FTG at Randolph, CSOs for all USAF aircraft now receive their training at NAS Pensacola. While some USAF aircraft, such as the airlift version of the Lockheed C-130J have eliminated the navigator/CSO position, aircraft such as the HC-130J, MC-130J and WC-130J continue to retain requirements for CSOs, together with many older aircraft such as the C-135 series aircraft, B-1, B-52, E-3, E-8, F-15E etc., thus ensuring the continued viability of the CSO career path within the U.S Air Force structure.

Students arriving at Penacola learn to complete the Primary Phase of their training in the T-6A with the 455th FTS first, followed by their Advanced Phase in the T-1A Jayhawk with the 455th FTS. The Primary Phase covers basic airmanship, instruments, low-level flying and navigation, whilst the T-1 phase covers more advanced navigation, electronic warfare, mission management and weapons employment. It is at this stage that the T-25 simulator (see further down) is introduced. The CSO training programme at Pensacola lasts for approximately 11 months. 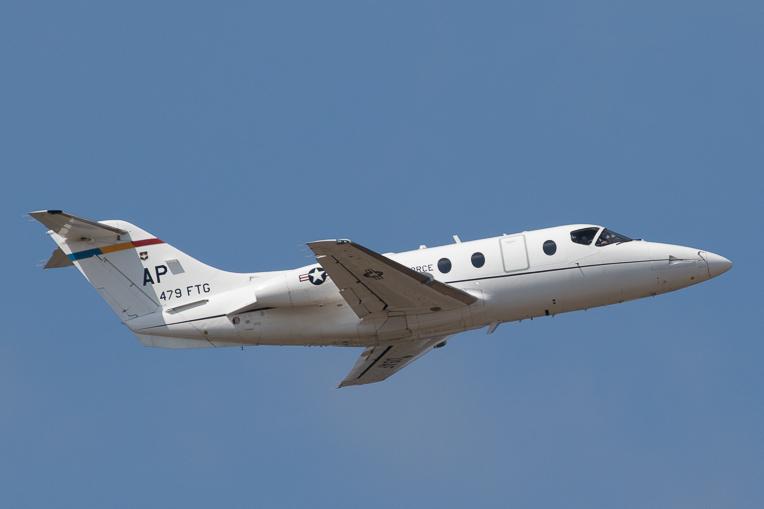 A few years back, the USAF T-1 fleet began to adopt a rather drab grey scheme as seen above on #94-0121
This now seems to have been dropped, as we only saw two such aircraft at Pensacola, and only white aircraft amongst the fleet on a recent visit to Columbus AFB 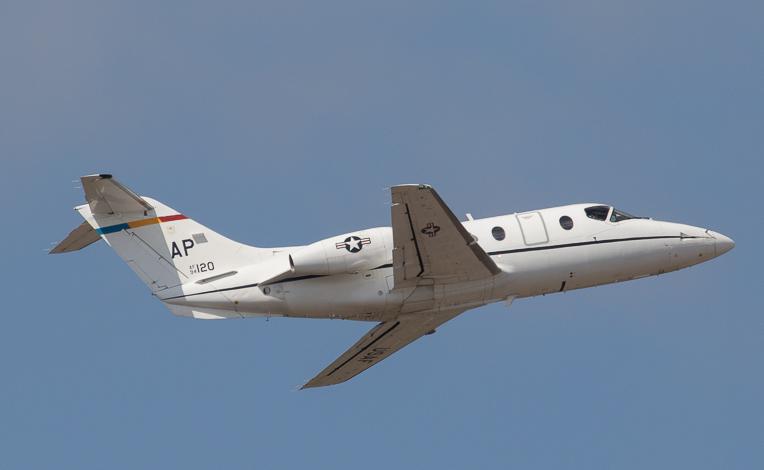 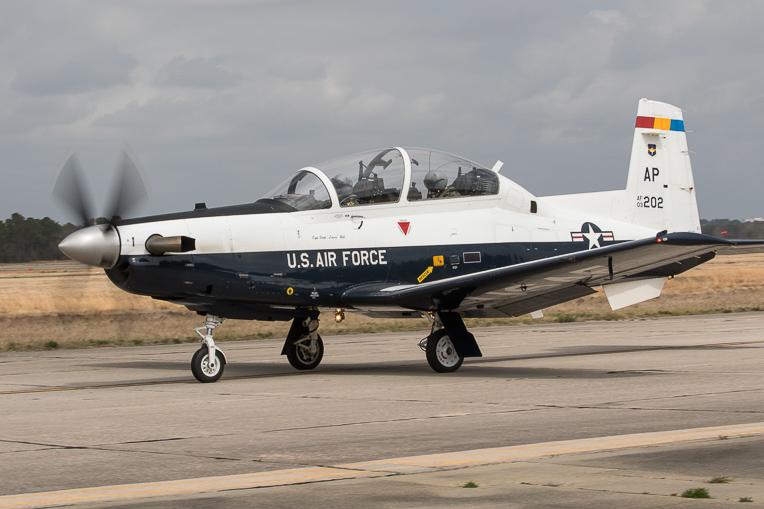 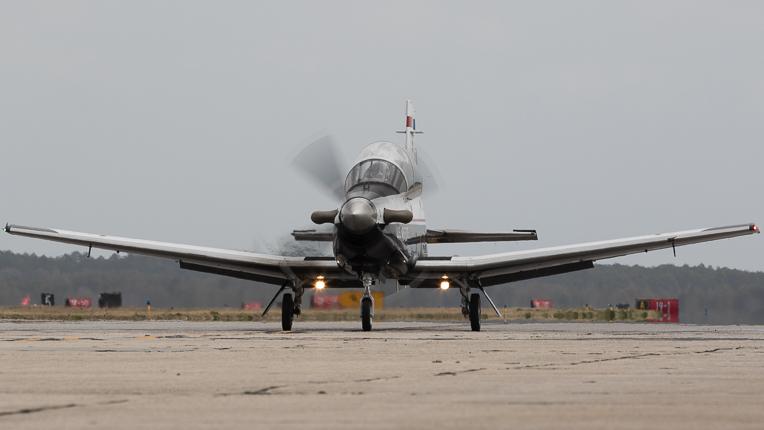 The Primary Phase of CSO training at Pensacola involves 24 flight hours in the T-6A, 14 hours in the simulator and 220 hours of academic study 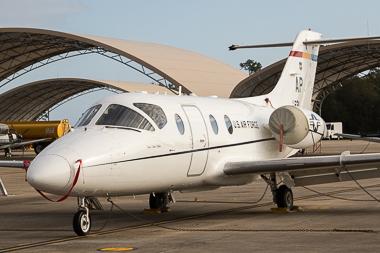 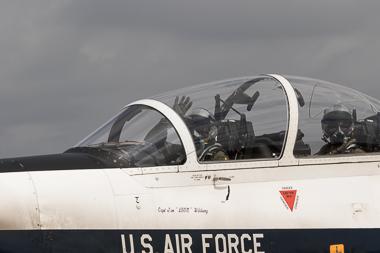 The newly introduced CSO training programme merged three previous UNT tracks; formerly known as the Navigator track, the Weapon Systems Officer track and the Electronic Warfare Officer track, into one coherent training cycle in order to produce an aeronautically rated officer who is more versatile. Initially running in parallel, the Navigator and WSO tracks ended in 2009. Upon completion of training, USAF CSOs receive their basic CSO wings, after seven years of aeronautically rated service they become eligible for the Senior CSO rating and at fifteen years the Master CSO rating. There is an effort underway to rename the Master CSO designation to Command CSO, thus standardising CSOs with their pilot counterparts. 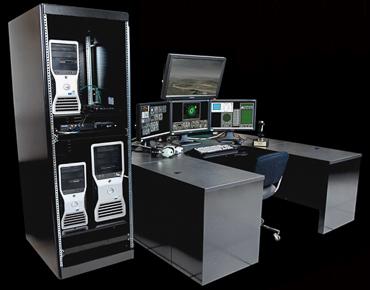 The T-6A is a popular aircraft with both U.S Navy and Air Force crewmen alike
Its good performance and nimbleness for a turbo-prop providing an ideal training platform 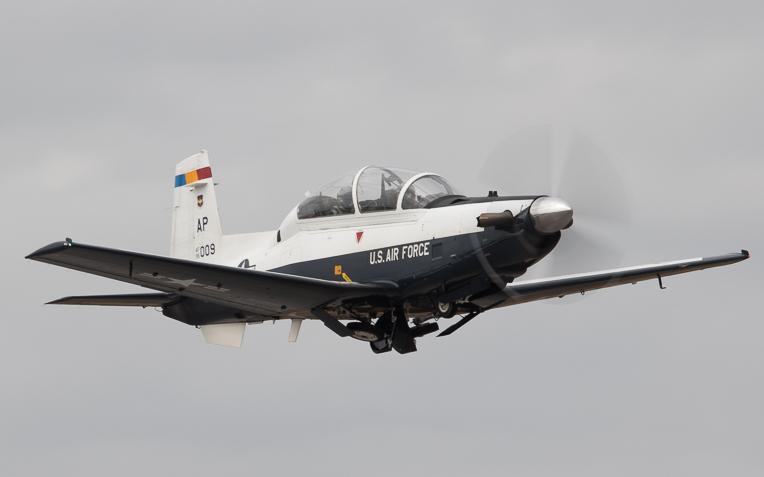 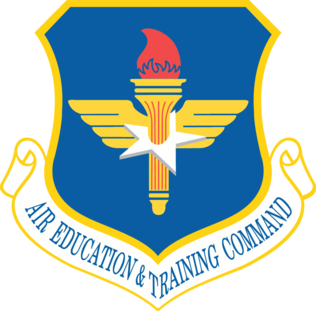 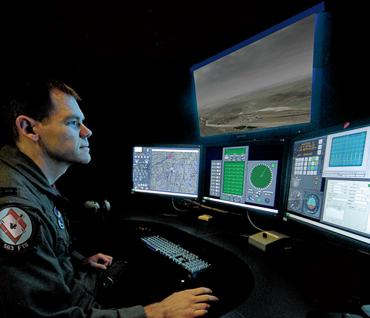 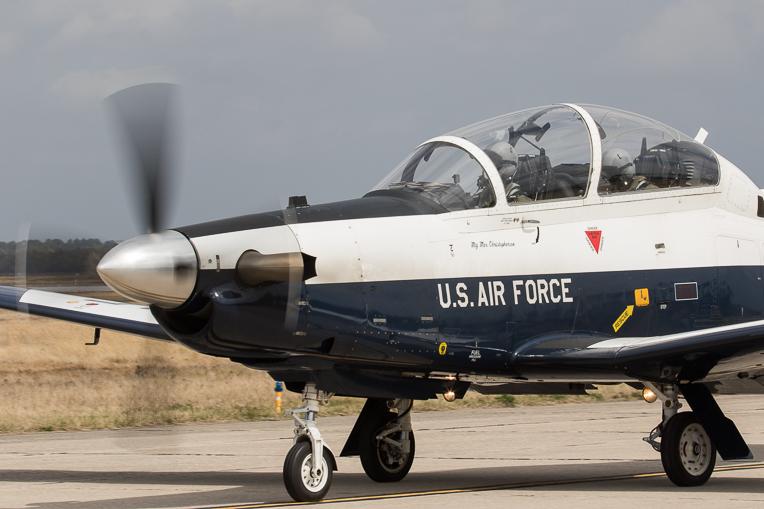 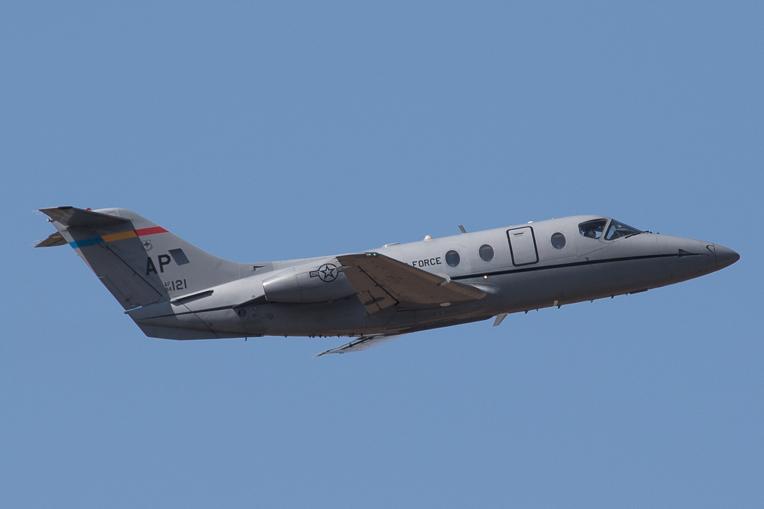 The T-6 fleet was especially busy during our visit in March 2016, with a steady flow of aircraft flying missions throughout the day 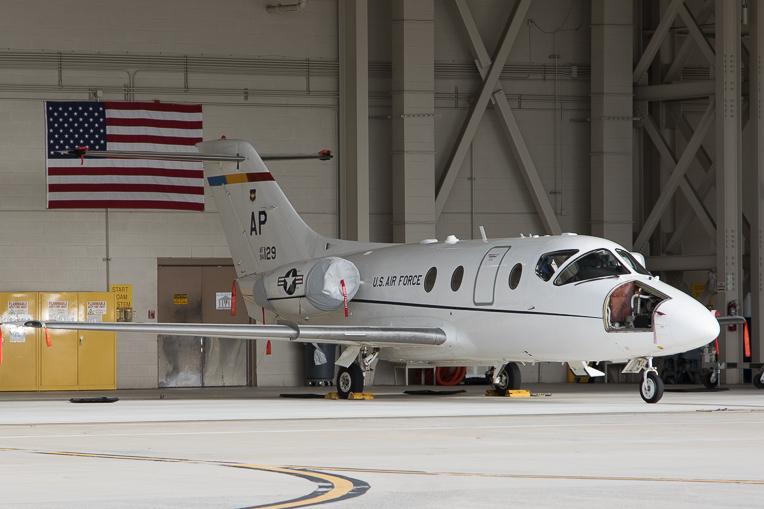 Until its inactivation and closure in September 1993 due to Base Realignment and Closure (BRAC) plans, all USAF Undergraduate Navigator Training (UNT) took place with the 323rd FTW at Mather AFB utilising the Boeing T-43A and Cessna T-37B aircraft. In October 1993, training shifted to the 12th FTW at Randolph AFB, where it continued until 2009. Prior to its dis-establishment at Randolph, the 562nd FTS was responsible for training in-flight navigation with the T-1A Jayhawk and T-43A, whilst the 563rd FTS taught electronic warfare in an academic and simulator environment. The 563rd FTS also utilised the T-43A and the T-1A in the advanced CSO training role.

From 1994 until late 2009, a portion of UNT took place at NAS Pensacola, integrated with the

The Advanced Phase of the CSO students training incorporates 40 flight hours in the T-1A, 86 hours in the simulator and a further 398 hours of academic study. Unofficially the T-1As at Pensacola are known as T-1Ms, as they have been modified to hold an additional student and instructor station in the aft section of the aircraft. The aft training station receives information directly from the aircraft avionics and global positioning system. Until 2009, electronic warfare training for CSOs could only be conducted in the ground simulators, this modification to the T-1 allows simulated threats to be introduced to provide a virtual threat environment to students. The modifications also include new touchscreen consoles that allow the instructors to interact with students and to set up different threat scenarios, teaching the students how to identify and react to notional threats whilst in flight. 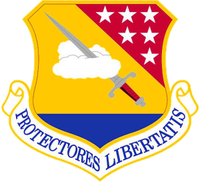 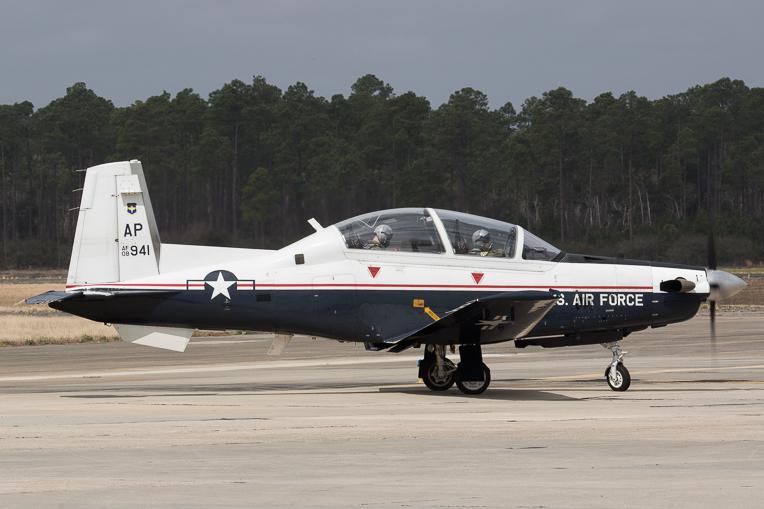 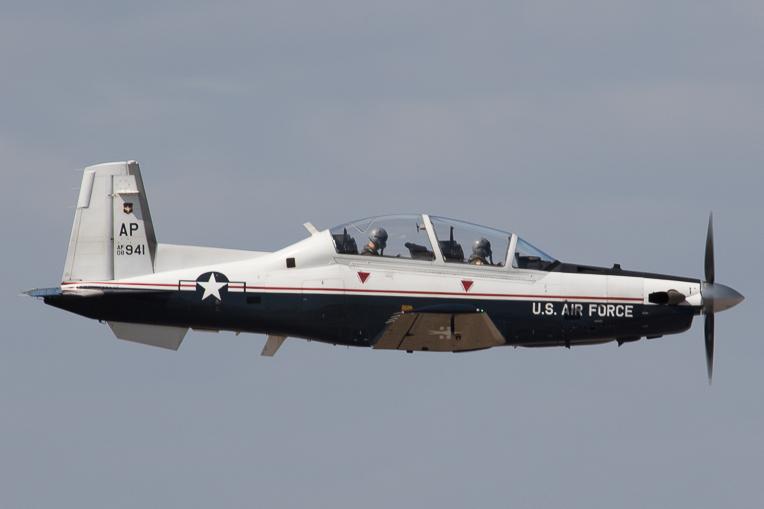 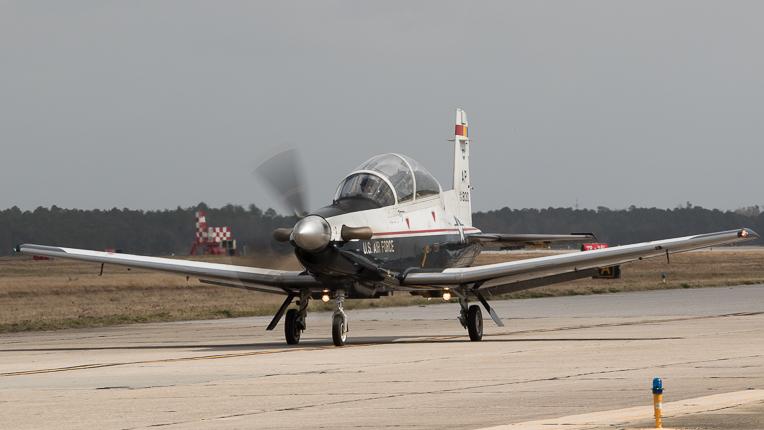 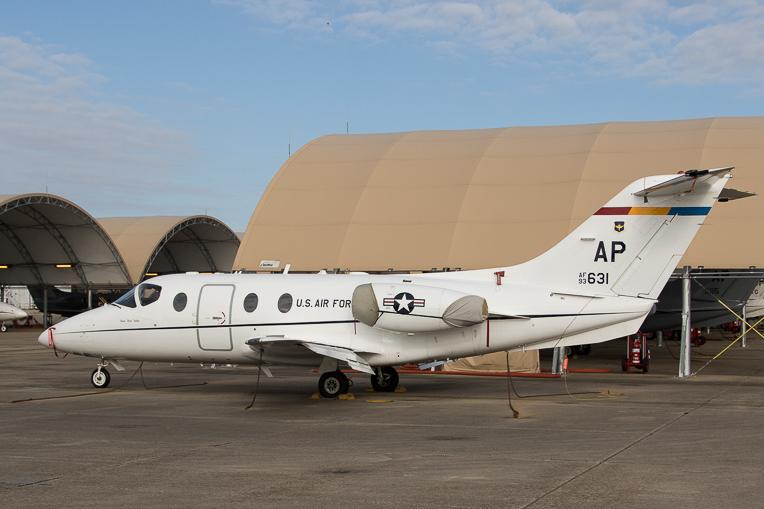 The 479th FTG is a subordinate unit of the 12th Flying Training Wing (FTW) located at what is now known as Joint Base San Antonio-Randolph, Texas. Operating under the auspices of Air Education and Training Command (AETC), the 479th has three squadrons in the Group; the 479th Operations Support Squadron (OSS), 451st Flying Training Squadron (FTS) and the 455th Flying Training Squadron. The three squadrons work in conjunction with each other to graduate more than 350 CSOs annually. These CSOs are trained to go on and perform duties as Electronic Warfare Officers (EWO), Weapons Systems Officers (WSO) and Panel Navigators. In addition to overseeing the CSO training programme, the 479th FTG also has an intelligence flight. The 479th OSS supports the primary and advanced phases of the undergraduate Combat Systems Officer training, conducting academic training, scheduling, aviation resource management, communications, current operations, aircrew flight equipment and flight physiology functions for the group. The Operational Support Squadron also houses the Group's flight simulators; two for the T-1A Jayhawk aircraft and three for the T-6A Texan II; as well as the 18 Textron T-25 simulators. The 479th OSS also conducts advanced graduate electronic warfare training for U.S Air Force, U.S Army, NATO and international military personnel.

The two squadrons that conduct flight operations for the 479th FTG are the 455th FTS, which conducts the primary phase of undergraduate Combat Systems Officer training using a fleet of 22 Beechcraft T-6A Texan II aircraft; and the 451st FTS, which conducts the advanced undergraduate Combat Systems Officer training, using 21 Beechcraft T-1A Jayhawk aircraft. Having previously been disbanded in July 2007 at Moody AFB, Georgia, the 479th FTG was reactivated at NAS Pensacola on 2nd October 2009, assuming responsibility for the successor programme to the Air Force's Undergraduate Navigator Training (UNT) that was previously conducted by the 12th Flying Training Wing at Randolph Air Force Base, Texas between 1993-2010 using the Boeing T-43A and the T-1A Jayhawk. 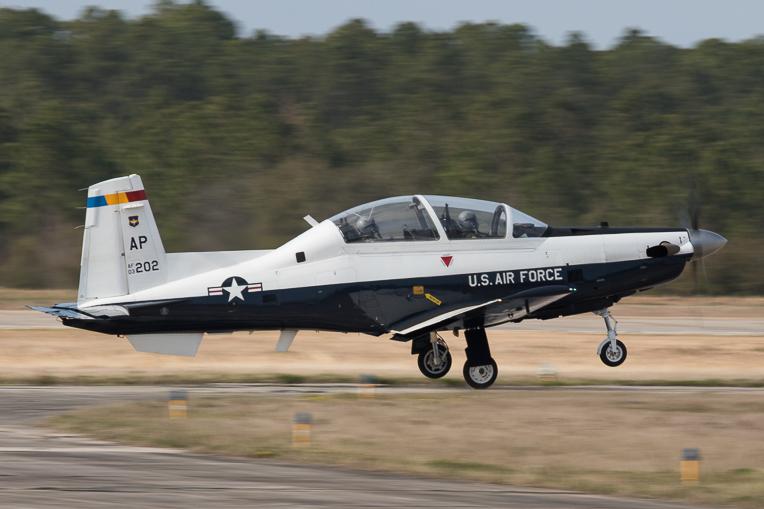 The T-25 consists of six student stations, a two-position instructor console and a Training System Support Center (TSSC) for software and training exercise development. The T-25 SECT's visual displays provide a scene of the simulated environment from the perspective of the simulated aircraft, thus enhancing a student's situational awareness. The visual scene is generated by VRSG, running on a separate CPU and displayed on an overhead monitor. Inputs to VRSG are through standard network messaging. The visual system displays simulated entities in the environment that are within the line of sight, including other aircraft, ground installations, missiles, chaff, flares, ground vehicles, weather (fog/clouds), detonations, and terrain features.

The SECT radar supports the simulation of several weather systems, each consisting of one or more clouds with varying levels of intensity over a large geographic area.