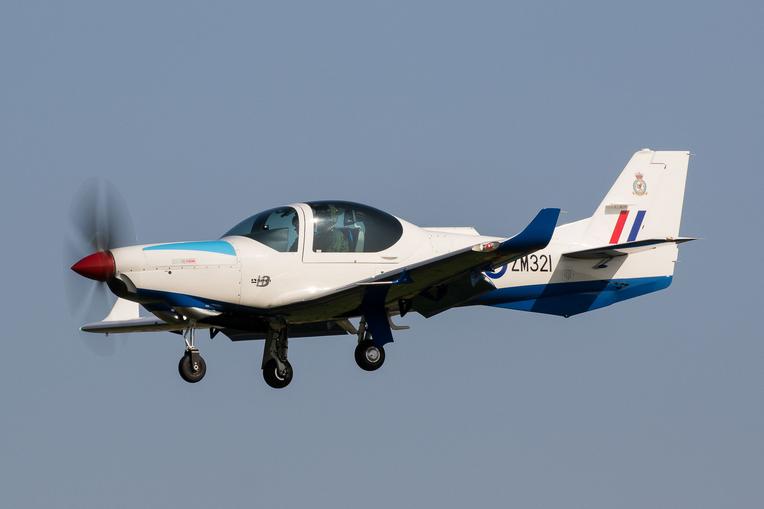 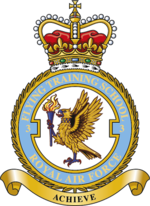 In conjunction with RAF Barkston Heath, located some 6 miles down the road from Cranwell, 3 FTS is responsible for delivering EFT and MEPT for all three UK military services (Army, Navy and Air Force). As one would expect, RAF Cranwell and RAF Barkston Heath see year-round flying training, with aircraft in the circuit from 8am through to 5pm most weekdays. However, the new training syllabus is not only aimed at providing more modern and relevant training aircraft; Cranwell has also seen considerable investment in new infrastructure, with the emphasis on synthetic training aids, which includes a high-end, full mission CAE flight simulator for the Phenom, a Phenom 100 flight training device and four Garmin 1000 part-task trainers. The advancement that MFTS provides ensures a far more capable pilot moving onto the frontline, as with the advancement MFTS provides, they already know how to manage systems and avionics when they arrive at their designated squadron for conversion to type. 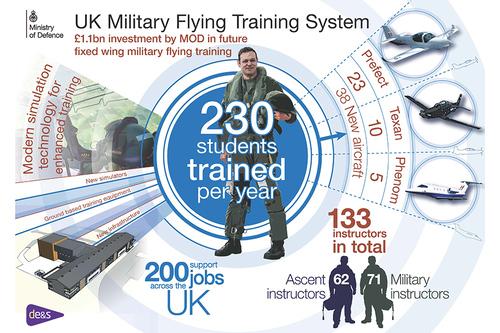 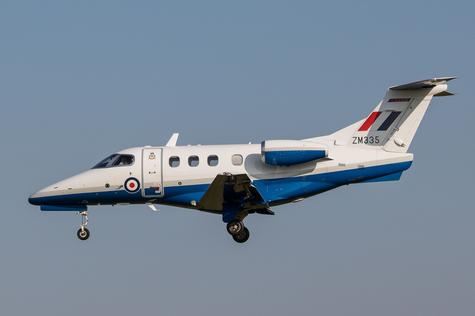 The introduction of a number of new types to frontline squadrons (Atlas, Voyager, F-35 and Poseidon to name but a few) meant that the UK’s training programme was beginning to look a little jaded in comparison to the modern hardware entering frontline service, and it was beginning to fall somewhat short in terms of being able to provide relevant training platforms best-suited for the more advanced types. Introduction of the British Aerospace Hawk T2 jet trainer in 2009 rectified the issue for pilots moving onto the Typhoon and more recently the F-35 Lightning, but for those entering the Intelligence, Surveillance, Target Acquisition and Reconnaissance (ISTAR), and Air Mobility stream, it was starting to creak. The UKMFTS was designed to be the key to providing a syllabus across the board that would enable the RAF, Royal Navy and Army Air Corps to look well into the middle of this century and beyond.

3 Flying Training School has undergone a revolution in recent years as part of the UK Military Flying Training System (UKMFTS). This far-reaching programme has seen the best the Royal Air Force has to offer combine with the Ministry of Defence’s (MOD) commercial training partner, Ascent, which is considered to be one of the best in the business. A programme

Based on the Embraer 100 business jet, the Phenom’s advanced avionics and touchscreen glass cockpit, combined with a comprehensive navigation, communications and flight safety suite, ensures MEPT students are able to manage the systems and avionics of the frontline aircraft they move onto after completion of their training. The Phenom aircraft at RAF Cranwell are operated by 45 Squadron, and manned by an Instructor Pilot (IP), two student pilots and four students as rear crew. The student pilots are seated in the modern glass cockpit, while the cabin accommodates the instructor and four crew members. 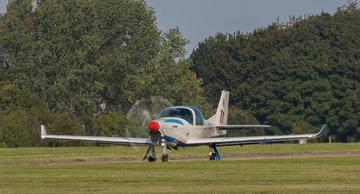 Trainee pilots on 45 Squadron are also exposed to the elements of night flying - including visibility, planning considerations and operating techniques, all of which differ subtly from daytime flying. As with the EFT programme, the MEPT involves a proportion of synthetic training, but to a much larger degree – involving some 54 events amounting to a total of 76 hours. 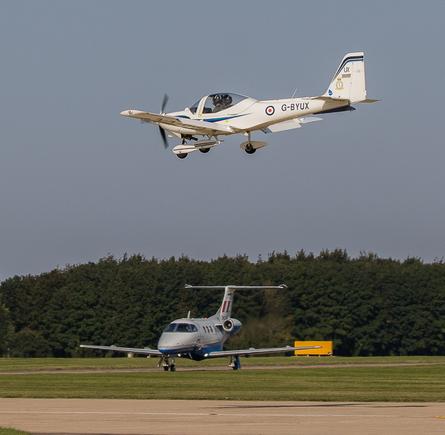 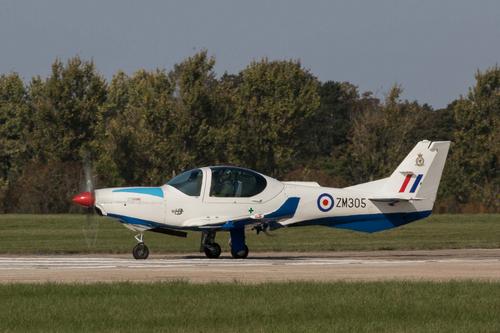 RAF Cranwell, Lincolnshire, has a long and distinguished history dating back to its foundations as a Royal Navy Training establishment in 1916. It was the world’s first air academy, and over a century later it continues to select and train the next generation of officers and aircrew. It is currently home to 3 Flying Training School (3 FTS), which delivers the Elementary Flying Training for fixed-wing and multi-engine student pilots from the RAF, Royal Navy and Army Air Corps; and also 6 Flying Training School, which oversees all University Air Squadrons (UAS) across the UK and the Tedder Leadership Academy. RAF Cranwell is also home to the Royal Air Force College (RAFC), providing initial training to all RAF personnel who are training to be commissioned officers.

Although the Grob Prefects at RAF Cranwell are flown by 57 Squadron, of note is the fact that they wear the markings of 3 FTS, denoting the fact that the fleet at Cranwell is pooled with that at RAF Barkston Heath and that the Prefect is also used by 674 Sqn Army Air Corps and 703 NAS Fleet Air Arm 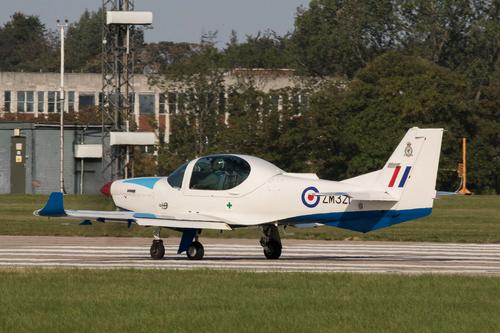 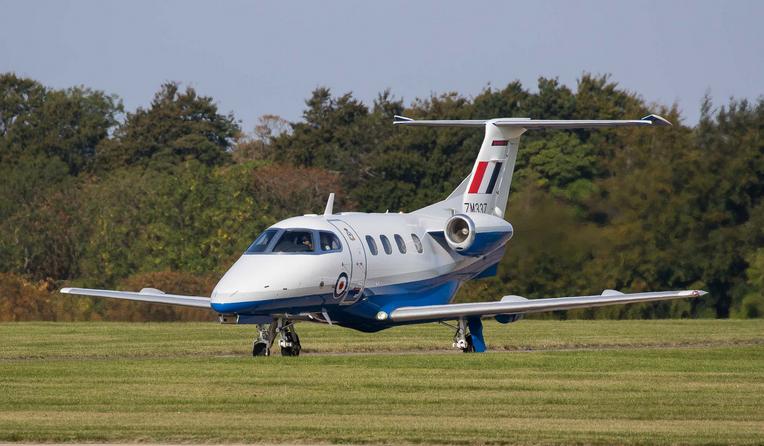 A key element of the MFTS system is the advancement in synthetic training, 33 hours of which are undertaken during the EFT phase, with students using desktop and tablet computers (which they are able to take home to continue their studies), as well as advanced full-motion flight simulators. The advanced sim training enables the students to become familiar with the aircraft systems long before they’ve even set foot inside the aircraft, which also benefits the QFI’s (Qualified Flying Instructors) no end as they can concentrate on the flight elements knowing that the aircraft's systems are already familiar to the students.

that began with the introduction of the British Aerospace (BAe) Hawk T2 for Advanced Fast-Jet Training (AFJT) and the Royal Navy’s Beechcraft Avenger, MFTS has transformed the UK’s military flying training in recent years. With the system now implemented across all aspects of the flying training programme including; Elementary Flying Training (EFT), Basic Fast-Jet Training (BFJT), Multi-Engine Pilot Training (MEPT), and Helicopter Flying Training, each sector has undergone modernization and inclusion into the programme, with new aircraft types being introduced across the board.

Phenom #ZM335 about to land on Runway 25 at RAF Cranwell 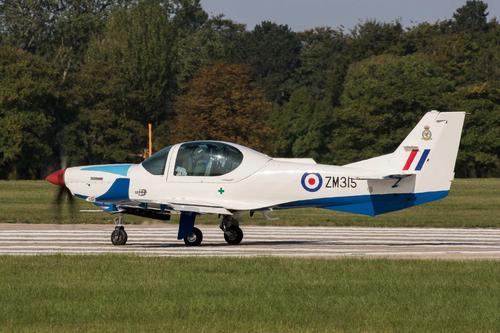 factorssuch as weather and aircraft availability. This then culminates in the Student achieving the equivalent of a Private Pilot’s Licence (PPL), but with added low-level and formation flying elements. Students are then streamed into either Basic Fast-Jet Training, Helicopter Flying Training, Reaper Training or Multi-Engine Pilot Training. 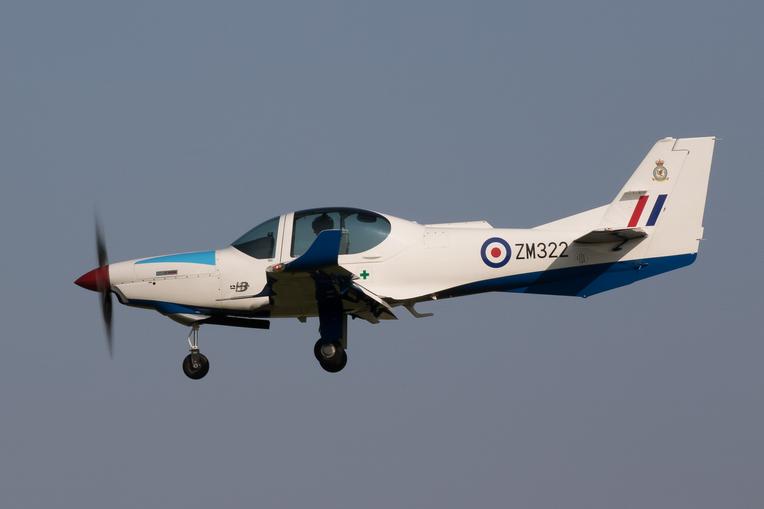 On the strength of 45 Squadron in the Multi-Engine Pilot Training (MEPT) role, the first Embraer 100 Phenom T1 for the Royal Air Force was delivered to RAF Cranwell in July 2017, with the fifth and final aircraft, ZM337, touching down at Cranwell on 30 January 2018 after its delivery flight from Brazil, via RAF Lossiemouth, Scotland. ZM337 is seen at its home base in September 2020 (photo, left)as it heads out for its second sortie that particular day, using the callsign Cranwell 34. The aircraft wears the standard blue/white scheme adopted by the fleet. 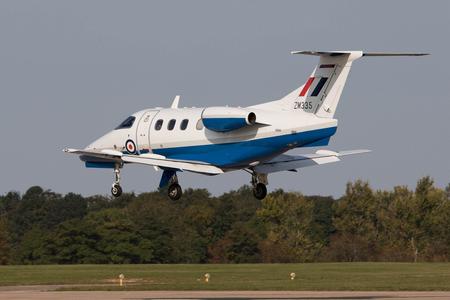 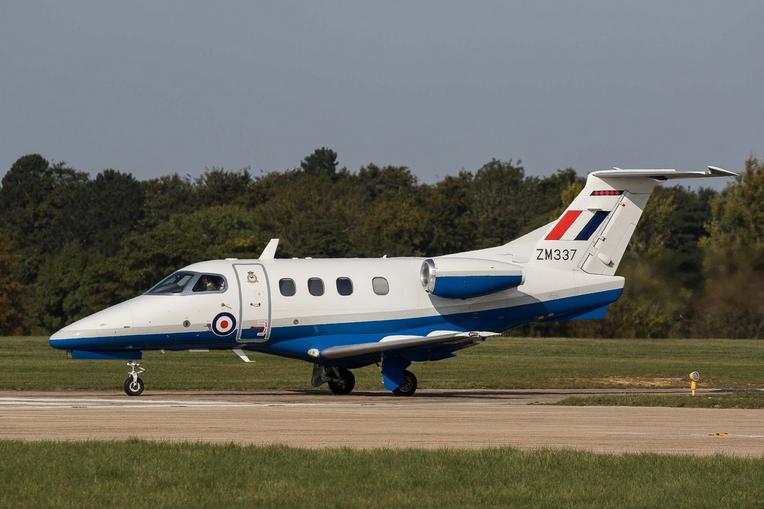 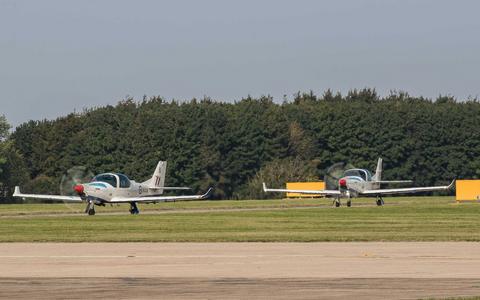 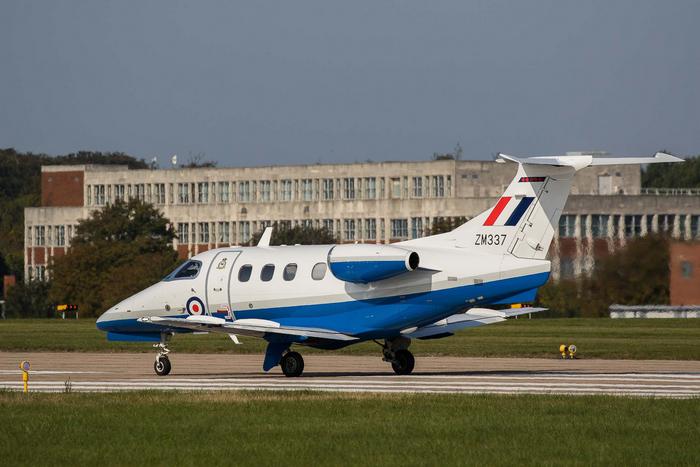 Prior to EFT, students will have undergone four weeks of Ground School with sorties typically lasting one hour. The EFT course sees further ground school training and flying utilising the Prefect T1. Courses are scheduled to run over a 16-week period involving 40 hours of flying training; however, this can be affected by a range of

Unlike the EFT phase, which utilises RAF Cranwell and RAF Barkston Heath, all Multi-Engine Pilot Training is conducted from Cranwell. MEPT is the sole responsibility of 45 Squadron and its small fleet of Embraer 100 Phenom T1s. Taking over the multi-engine aircrew training duties of the Beechcraft King Air B200 and B200GT, the first Phenom was delivered to the RAF in August 2017. With its touchscreen cockpit and comprehensive navigation, communications and flight safety suite, the Phenom T1 delivers a quantum leap in multi-engine flying training over its predecessor, and its capability as well as cockpit layout is far closer to the frontline types onto which its students will progress. The MEPT programme also incorporates training for fixed-wing rear crew such as Weapons System Operators, Loadmasters, and MQ-9 Reaper sensor operators.

The spacious cockpit of the Prefect combined with its turboprop power, retractable undercarriage and modern avionics make it a considerably more advanced and capable ab initio trainer than the Tutor that it replaced. The Prefect presents a step-change in capabilities over the Tutor in that it has better performance, is more stable, more relevant in a low-level environment, and with instrument training that is leagues ahead. 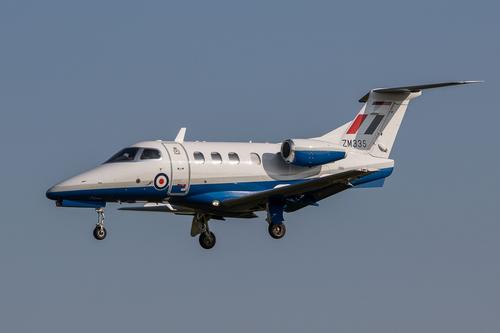 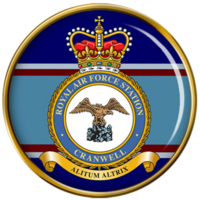 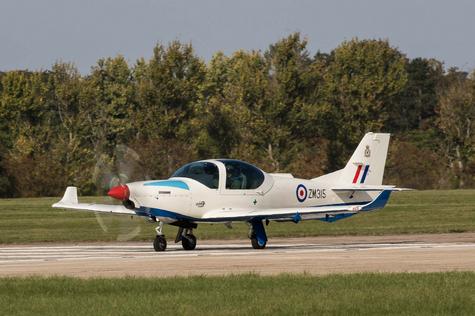 However, alongside stat-of-the-art simulators, the Phenom aircraft is just one part of a completely new training system for all Military multi-engine pilots and RAF Weapons System Operators (WSOp). The modern glass cockpit reflects the latest technology in use on the front line and ensures that student pilots and WSOp have the best possible training for their future roles operating modern aircraft such as the Voyager, A400M and Poseidon.